Western nations slammed Turkey's Syria incursion at the UN, but the Security Council failed to agree on a statement. Russia says it wants the "illegal military presence" of other nations to be addressed in any document. 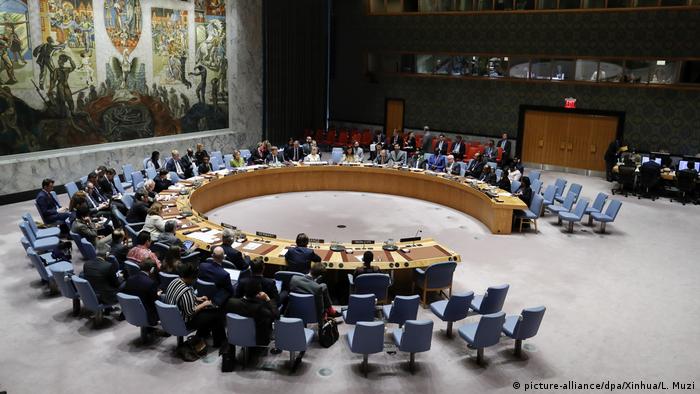 A split UN Security Council on Thursday failed to agree on Turkey's offensive in northeast Syria, with European members urging a halt to military action.

But Syria's ally Russia urged "restraint" and "direct dialogue" between the two countries. Russian officials said Moscow was not prepared to sign off on the statement presented by the Europeans.

Read more: Should Turkey fear the long arm of US sanctions?

The meeting was called at the request of the body's European members – Germany, France, the UK, Belgium, and Poland, all of which had expressed alarm at Turkey's move. However, the 15-member Security Council was unable to agree on a joint statement condemning the attack.

Russia's UN Ambassador Vassily Nebenzia said any Security Council statement would have to take into account other aspects of the Syrian crisis. He said it should demand an immediate termination of "the illegal military presence" in the country.

Meanwhile, the US warned Turkey of "consequences" as Ankara's troops push on their assault on Kurdish-controlled areas in Syria on Thursday.

"Failure to play by the rules, to protect vulnerable populations, failure to guarantee that (the Islamic State) cannot exploit these actions to reconstitute will have consequences," the US envoy to the UN, Kelly Craft, told reporters in New York.

The US President Donald Trump "has made abundantly clear" that the US "has not in any way" endorsed Turkey's offensive in Syria, Craft added after a closed door meeting of the UN Security Council.

"When we go 30 kilometers deep in the safe zone, terror there will be removed," he told CNN Turk, referring to the Kurdish militants.

It was not immediately clear what consequences the attack would have for the population in northern Syria, as international activists estimate that 450,000 people live within 5 kilometers (3 miles) of the border.

Meanwhile, Turkish strongman Recep Tayyip Erdogan defended the offensive, dubbed "Operation Peace Spring" in a fiery speech to lawmakers from his AK party. Erdogan attacked critics such as Egypt and Saudi Arabia, and once again threatened to send the refugees hosted by Turkey to Europe.

"Hey European Union, pull yourself together. If you try to label this operation as an invasion... we will open the gates and send 3.6 million refugees your way," he said.

No help from Washington or Damascus

The Kurdish forces have played a key role in defeating the "Islamic State" (IS) militia in Syria. They were supplied and supported by the US military. Despite Washington's criticism, the US withdrawal from Syria is widely seen as a green light to Turkey to move against the Kurds.

At the same time, Syrian regime signaled it would not aid the Kurds despite tentative cooperation in the long-running civil war. On Thursday, Syria's deputy foreign minister Faisal Maqdad said Kurdish militants had "betrayed their country and committed crimes against it."

"We won't accept any dialogue or talk with those who had become hostages to foreign forces," he told reporter in Damascus. "There won't be any foothold for the agents of Washington on Syrian territory."