Germany and the European Union are among many voices speaking out against the Turkey's military invasion of northern Syria on Wednesday. World powers are deliberating how to respond. 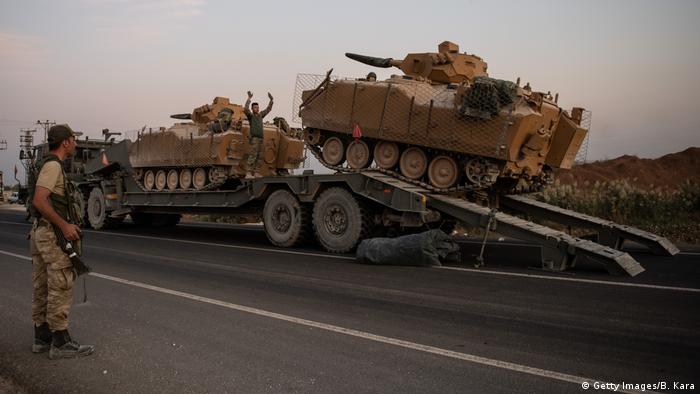 Condemnations poured in on Wednesday after Turkish troops began their military offensive on Kurdish forces in northern Syria.

Countries and global organizations are now considering concrete countermeasures, including the possibility of sanctions on Turkey until forces are withdrawn.

European Commission President Jean-Claude Juncker called on Turkey to immediately cease the operation and urged restraint from all sides. He cautioned that the European Union would not fund a "safe zone" inside Syria.

"If the Turkish plan involves the creation of a so-called safe zone, don't expect the European Union to pay for any of it," Juncker told EU lawmakers in Brussels.

German Foreign Minister Heiko Maas condemned the  offensive "in the strongest possible terms," and called on Ankara to end the operation and pursue its security interests peacefully.

"Turkey is condoning the further destabilization of the region while risking a resurgence of IS," Maas said in Berlin. Maas added Turkey's actions could lead to a humanitarian crisis in the region and create a new wave of refugees.

The UN Security Council announced that it will hold an emergency meeting Thursday to discuss the offensive at the request of France, Germany and Britain. Security Council President Jerry Matthews Matjila called for Turkey to "protect civilians.”

In the US, the development has ushered in a rare moment of bipartisan political support, with both Republican and Democratic senators cooperating on a bill that would freeze all assets belonging to Turkey's leaders and immediately block US arms sales to the country. The bill, if passed, could also potentially include penalties for other countries that sell weapons to Turkey.

Many politicians have criticized US President Donald Trump's decision to withdraw American troops from the region in the lead-up to the invasion as a move that aids US adversaries like Russia.

Russian President Vladimir Putin, for his part, told the Turkish president in a phone call on Wednesday to "think carefully" about the plan of action "so as not to harm overall efforts to resolve the Syrian crisis."