Chancellor Angela Merkel has called for an immediate cessation of fighting in Syria. Clashes between Turkish and Kurdish fighters allowed some 785 "Islamic State"-affiliated individuals to flee a guarded camp. 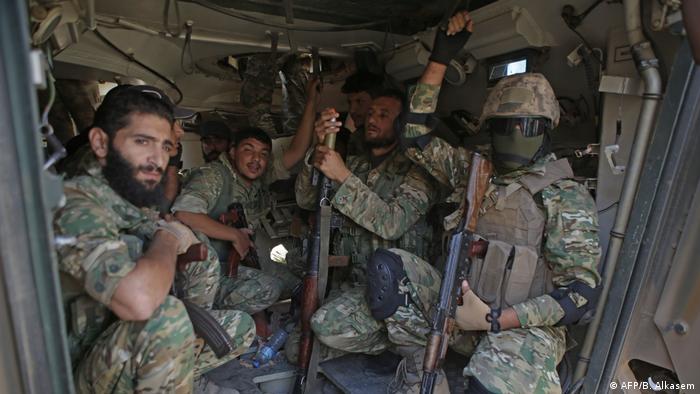 German Chancellor Angela Merkel has urged Ankara to end its actions against Kurds in northern Syria.

In a phone conversation with Turkish President Recep Tayyip Erdogan on Sunday, Merkel called for "an immediate end to the military operation," a spokeswoman for the chancellor said.

She added that it "threatens to displace large sections of the population, destabilize the region, and restore IS," referring to the "Islamic State."

Turkey: Arms embargo 'will strengthen us'

Germany was joined by France on Sunday in issuing an arms embargo against Turkey. However, Ankara has scoffed at this move, saying it will "just strengthen us."

US Defense Secretary Mark Esper also said on Sunday that the US military was going to pull a further 1,000 troops from northern Syria as they prepare to leave the country completely.

President Donald Trump's decision last week to pull out of the region has been criticized by both US Democrats and Republicans and international allies. When he announced his intention to leave Syria generally last year, former Defense Secretary Jim Mattis resigned in protest.

Some 100,000 people have already been displaced in northern Syria due to the Turkish offensive.

Trump's surprise decision to pull military support for the Syrian Kurds effectively abandoned a key ally in the defeat of IS. This not only led to widespread criticism, it also opened up an avenue for Turkey to fulfill its desire to launch a full-scale operation against the Kurds in Syria. As a result, the Kurdish People's Protection Units (YPG) have said they could no longer focus on protecting IS-filled prisons and keeping an eye on the terrorists' supporters.

As Turkish forces approached Ein Eissa, the administrative center of the Kurdish-held areas, about 35 kilometers (20 miles) south of the border, Kurdish militia had to abandon a camp of about 12,000 displaced people — among them wives and children of IS fighters and their sympathizers.

A statement from the Kurdish-led administration in the region said about 785 IS supporters were able to flee after taking advantage of distracted guards and storming the gates of their confines, giving credence to the fear that the US withdrawal and the Turkish incursion would allow IS to regroup after having been mostly defeated.

"The escape comes after shelling when Turkish-allied mercenaries hit the camp. This represents support for the resurgence of Daesh," the statement said, using another name for IS.

Turkey's offensive aimed at driving Kurds it calls "terrorists" from northeastern Syria has entered its fifth day. The assault has raised fears that the "Islamic State" could regroup in the region. (13.10.2019)