Turkey's offensive aimed at driving Kurds it calls "terrorists" from northeastern Syria has entered its fifth day. The assault has raised fears that the "Islamic State" could regroup in the region.

Clashes between Turkish-led troops and Kurdish militia on Sunday were concentrated around the border towns of Tel Abyad and Ras al-Ayn. More than 130,000 people were driven out of the surrounding rural areas, according to the United Nations.

On Saturday Turkey had claimed that its soldiers had seized Ras al-Ayn, but Kurdish forces denied the assertion.

The Britain-based war monitor Syrian Observatory for Human Rights said on Sunday that the Kurdish-led Syrian Democratic Forces (SDF) had succeeded in taking back most parts of the town from Turkish forces and their allied rebels.

The Observatory also said that Turkish forces and their allies had seized large parts of the town of Suluk, some 10 km (6 miles) from the border with Turkey.

The Turkish Defense Ministry has said that 480 fighters from the Kurdish YPG militia had been "neutralized" in the five days of the offensive, a term that commonly means killed. The Syrian Observatory for Human Rights put the number of Kurdish-led fighters killed at 104. Forty-nine Turkey-backed Syrian rebels and 30 civilians had also died so far in fighting, it said.

Up to 400,000 civilians in the conflict zone may require aid and protection in the coming period, according to the UN Office for the Coordination of Humanitarian Affairs.

The Turkish operation has also drawn threats of possible US sanctions and caused NATO allies Germany and France to say they would stop arms exports to Turkey.

The Arab League has also denounced Turkey's action, which Ankara says is aimed at driving away Kurds linked with a Kurdish insurgency within its own borders. 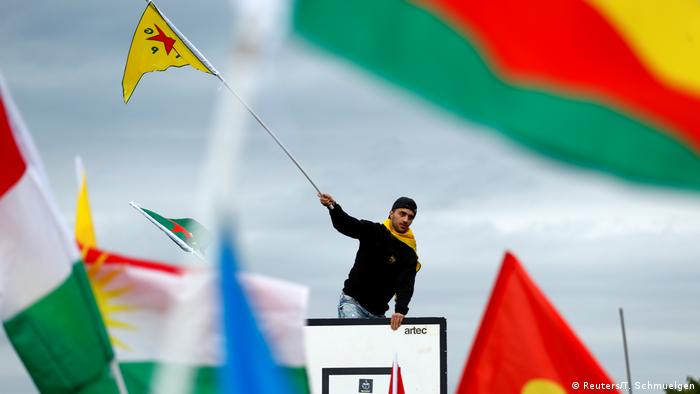 Protests against the offensive, like this one in Cologne, Germany, have taken place across Europe

'An island of one'

Trump has faced strong bipartisan criticism for withdrawing some US troops from the region ahead of the Turkish assault, a move many see as leaving Kurdish militia in the lurch after they aided Washington in fighting the extremist group "Islamic State" (IS).

The US president again defended the withdrawal on Saturday while calling himself an "island of one" in having taken the decision.

Trump told a meeting of conservative activists that the US could not take part in "endless wars."

He described the Middle East as an arena of permanent conflict where the US could do little to help, despite years of giving military and financial aid.

In another development on Sunday, Syrian Kurds said nearly 800 individuals affiliated with IS escaped a camp where they were being held after shelling by Turkey.

Critics of the Turkish offensive have argued the action could cause IS, which has been largely defeated, to regroup and regain strength.