A German newsmagazine has reported that the US wants a German air force mission in Syria to continue. But Angela Merkel's junior coalition partners say they want the flights to end later this year. 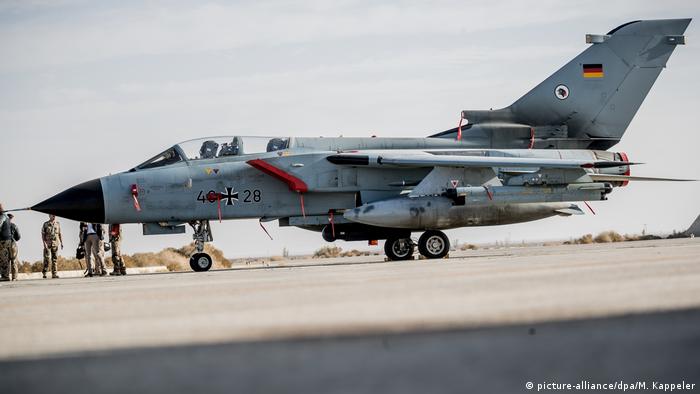 A US general has asked the German military to extend its aerial reconnaissance and tank missions in Syria to help US troops fighting against the remnants of the "Islamic State" terrorist group, German newsmagazine Der Spiegel reported Friday.

Der Spiegel said it had seen a confidential letter sent in May from the head of United States Central Command (CENTCOM), General Kenneth McKenzie, to Germany's Chief of Defense, General Eberhard Zorn.

In the letter, McKenzie reportedly commends Germany's reconnaissance mission and asks for the Bundeswehr armed forces to continue "support in the provision of surveillance flights, air refueling and army training in Iraq."

"Only with the continuation of permanent air surveillance for our men and women … can we ensure a dominance that is crucial for the success of the coalition," he wrote.

Mission due to end in October

Germany's coalition government agreed last year to end all reconnaissance flights and refueling missions by the end of October 2019.

The center-left Social Democrats (SPD), the junior partners to Chancellor Angela Merkel's conservatives (CDU/CSU), recently reiterated that they would not support any further extension to the mission, which began in 2015.

SPD Foreign Minister Heiko Maas, who on Friday visited the airbase in Jordan where Germany's Tornado reconnaissance aircraft are located, suggested last week that an extension was possible.

"Everything else will have to be discussed and decided in the Bundestag in due course," he said after a meeting with US Secretary of State Mike Pompeo.

"We very much welcome the fact that the United States has decided to maintain its presence on the ground," Maas said.