After the meeting, Secretary-General Jens Stoltenberg said that Iran must avoid "further violence."

"At our meeting today, Allies called for restraint and de-escalation. A new conflict would be in no one's interest, so Iran must refrain from further violence and provocations," Stoltenberg said.

Stoltenberg added that while the allied nations supported NATO's training mission in Iraq, it would remain temporarily suspended.

Germany, France and the UK called for a de-escalation of tensions in the Middle East as Iranian officials issued threats and the Iraqi parliament voted to remove US troops from Iraq.

"Europe now has an important role in view of the menacing escalation of the conflict between the United States and Iran,'' German Foreign Minister Heiko Maas said.

Later on Monday, European Commission President Ursula von der Leyen offered for the EU to mediate in the conflict, stressing the "repeated provocations" carried out by Iran in recent months, particularly at sea, and "the shelling of various targets in Iraq."

What did NATO likely discuss?

"There is a lot of concern about the Iraqi parliament's decision to remove all foreign troops," said DW's Teri Schultz in Brussels. "NATO is very worried about their training mission there, which was temporarily suspended within 24 hours of the killing."

"Germany, France and other NATO countries are likely to ask for guidance from the US at the NATO meeting," she added. "European Union countries are walking a tightrope between their ally the United States and their desire to keep Iran in the nuclear deal." 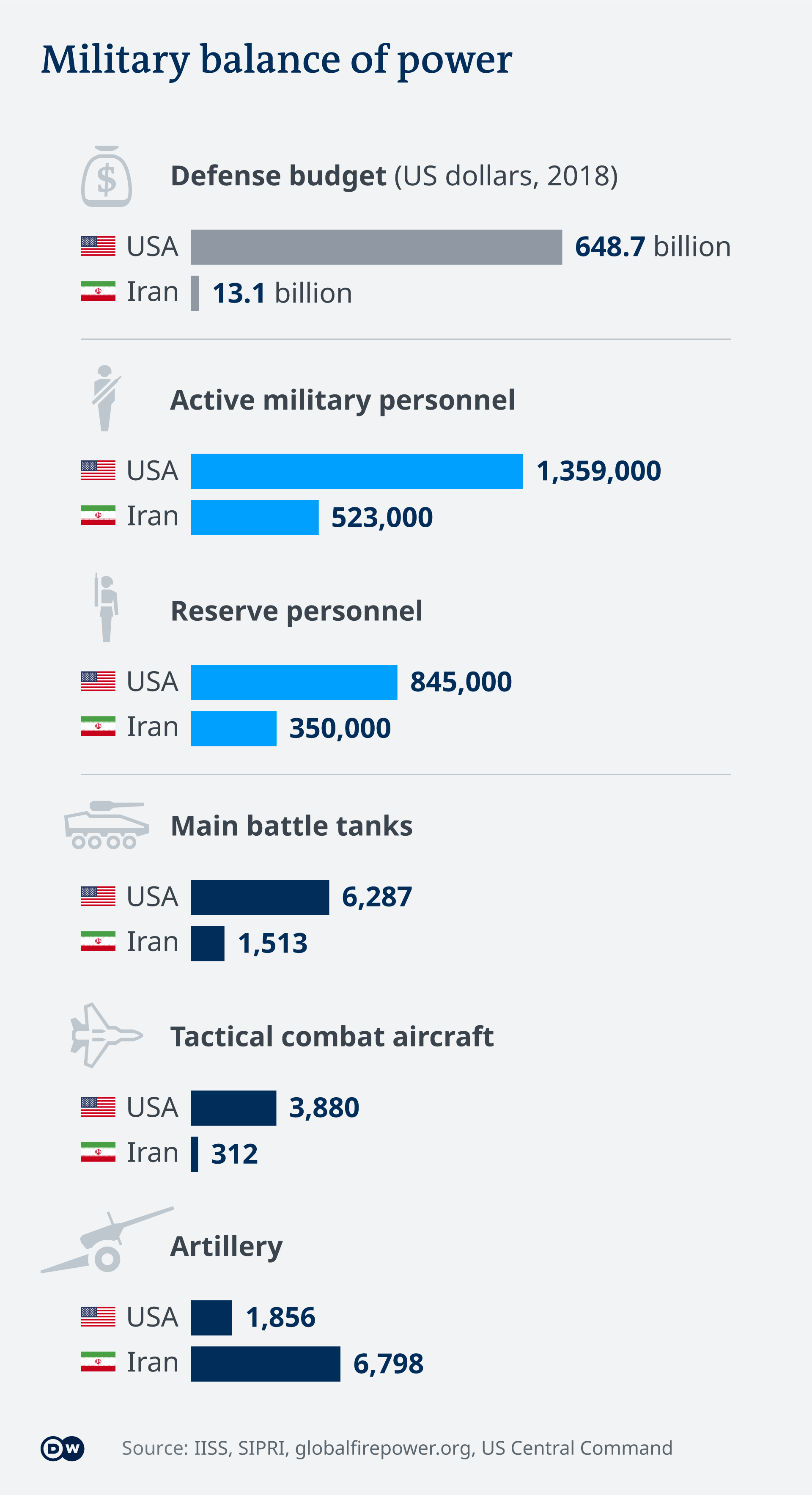 Comparison of US and Iran defense spending

Iran announced on Sunday that the country would no longer abide by the limits of a landmark nuclear deal that restricted the levels of its uranium enrichment.

On Saturday, a NATO spokesman said the mission, which involves several hundred allied personnel, was continuing, but that training activities were currently suspended.

He also confirmed that NATO Secretary-General Jens Stoltenberg had spoken by telephone with US Secretary of Defense Mark Esper.

The Philippines, a major non-NATO ally, said on Monday that the country was prepared to evacuate its workers from Iran and Iraq.

"President Duterte ordered the Armed Forces of the Philippines to be prepared to deploy military assets to repatriate overseas Filipinos in the Middle East, particularly from Iran and Iraq, at any moment's notice," said Filipino Senator Christopher Lawrence Go, a government lawmaker.

Shinzo Abe, prime minister of Japan, another close NATO ally, also said that he was "deeply worried" about the situation in Iran.

"A further escalation in this situation should be avoided and I call for diplomatic efforts by parties concerned," he said on Monday.

Abe also repeated his plans to deploy the Self-Defense Forces to the Middle East to ensure the safety of Japanese ships, even as tensions in the region erupted in the wake of the US killing.

Bunny Wailer, co-founder of the Wailers with Bob Marley, dies at 73 1h ago