Soleimani funeral: Daughter warns of 'dark day' for US

Huge crowds gathered in the Iranian capital Tehran for the funeral of General Qassem Soleimani, who was killed by US airstrikes. His daughter issued a threat to US soldiers in the Middle East.

Hundreds of thousands of mourners gathered for the funeral of Iranian General Qassem Soleimani on Monday, three days after he was killed by US airstrikes in Iraq.

"The families of US soldiers in the Middle East will spend their days waiting for the death of their children," said Zainab Soleimani, daughter of the slain general, on state TV.

"Crazy Trump, don't think that everything is over with my father's martyrdom," she added. She warned that the US and their ally Israel faced a "dark day" in response to his death.

Iranian Supreme Leader Ayatollah Ali Khameni led prayers in the funeral, at one point bursting into tears over Soleimani's coffin. He was flanked by Iranian President Hassan Rouhani and Soleimani's replacement as Quds commander, Esmail Qaani.

"We promise to continue martyr Soleimani's path with the same force [...] and the only compensation for us would be to remove America from the region," Qaani told state radio ahead of the funeral.

Assembled crowds yelled "Death to America!" and "Revenge! Revenge!" according to state TV. Soleimani's coffin was passed across the heads of the assembled crowd.

Iranian state TV put the crowd numbers at "millions," although external source could not verify this.

Soleimani's remains were flown in to the capital for the prayers and official ceremony at Masumeh shrine, ahead of a smaller funeral on Tuesday in his hometown of Kerman.

Comparison of US and Iran defense spending

On Monday, Germany, France and the UK urged a de-escalation of tensions between Iran and the US in order to end the cycle of violence. 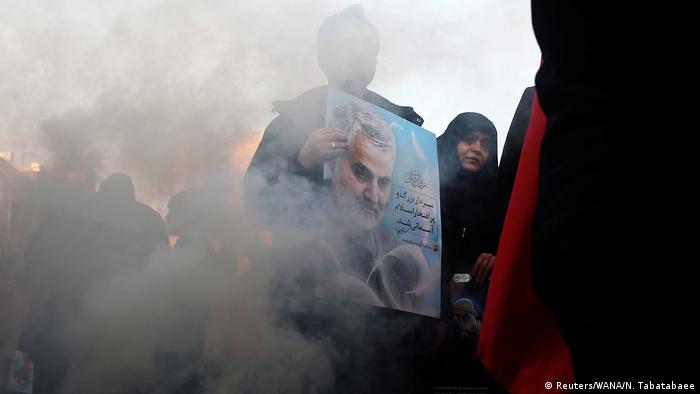 Mourners for Soleimani walk through smoke in Tehran

The US assassinated Iran's top army general Qassem Soleimani by drone strike on Friday. DW takes a look at how Germany's domestic press reported the news. (03.01.2020)