German prosecutors said evidence suggests Russia or Chechnya may have ordered the murder of a Georgian man in Berlin. Two Russian diplomats have been expelled, with the German government discussing further steps.

German federal prosecutors announced on Wednesday that they are taking over investigations into the murder of a Georgian asylum-seeker in Berlin, confirming earlier reports.

In late August, 40-year-old Zelimkhan Khangoshvili was shot in an "execution-style" killing at Berlin's Kleiner Tiergarten park. The suspect in the case, a 49-year-old Russian national, carried out the drive-by style shooting on a bicycle in broad daylight — shooting the victim in the head and chest, prosecutors said.

From the beginning, the killing raised concerns about Russia's intelligence agency possibly being involved. Moscow has denied any involvement in the case.

Who was the victim?

Khangoshvili was an asylum-seeker of Chechen descent from Georgia who fought against the Russians as a separatist during the Second Chechen War from 1999 - 2009. He was also known by a second identity "Tornike K." which was the one used by German prosecutors. After the war, he reportedly worked in both Ukraine and Georgia against Russian interests.

In their statement, German prosecutors said he was "classified as a terrorist by Russian authorities and persecuted as such."

He applied for asylum in Germany in 2016 following multiple attempts on his life in Georgia. His asylum application, however, was denied and he was slated for deportation. Khangoshvili's ex-wife, Manana Tsatieva, previously told DW: "We were warned that this would happen eventually."

Merkel: 'No active help from Russia'

German Chancellor Angela Merkel said that she plans to raise the issue with Russian President Vladimir Putin when she meets him next week for talks on the Ukraine peace process in France.

"We have received no active help from Russia in solving this case," she told reporters on the sidelines of the NATO summit in London.

"That says something about the significance of this crime. The government is still discussing what further consequences we will draw from this," he told a press conference in Berlin."

"Russia failed to work in a trustworthy way with German authorities and to deliver information about the suspect," Kiesewetter told DW. "The expulsion of two Russian diplomats is, therefore, a proportionate and consequential response."

He added that now that the Russian state has been implicated in the crime, Moscow should start cooperating in the case "to avoid a further loss of confidence."

Federal prosecutors in Germany take over investigations when there is a strong suspicion of involvement by a foreign state.

The case threatens to worsen already heightened tensions between Berlin and Moscow.

"First we examine what we are being accused of and why this is happening," he said. Russia has also said that this should not affect the planned talks in Paris next week between Putin and Ukrainian President Volodymyr Zelenskiy, where France and Germany are set to act as mediators. 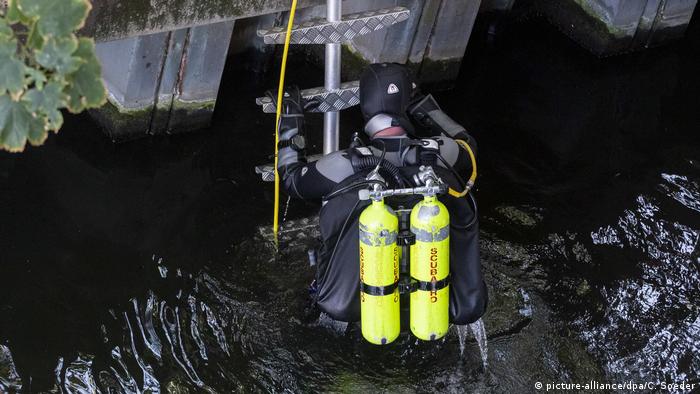 The suspected killer threw his bike, disguise and weapon in a nearby river shortly after carrying out the drive-by shooting on August 28

A senior Russian lawmaker, Leonid Slutsky, said on Wednesday Germany should expect to have two of its diplomats expelled from Russia as a "symmetrical" measure.

However, as Mark Galeotti, a British historian and expert on Russian intelligence, pointed out in an interview with DW, "It personally suits the Russians that they are thought to be behind this."

"Part of the Russian calculus is to present themselves as being so unpredictable and dangerous that the West really needs to make a deal with Moscow," such as over Ukraine, Galeotti added.

The current case follows the poisoning of former Russian spy Sergei Skripal, and his daughter who were poisoned with a nerve agent on British soil last year.

That attack was also blamed on Moscow — leading to the expulsion of dozens of Russian diplomats and triggered a diplomatic crisis between the UK and Russia.

In late August, a Chechen man was shot dead at a Berlin park. Western media reported that the suspect may have ties to Russian intelligence services — but Russia has gone on the offensive to discredit the claims. (25.09.2019)