The victim of an assasination-style shooting in Berlin was not targeted by the Russian government, the Kremlin said. The Georgian man had fought against Russian forces during the Second Chechen War. 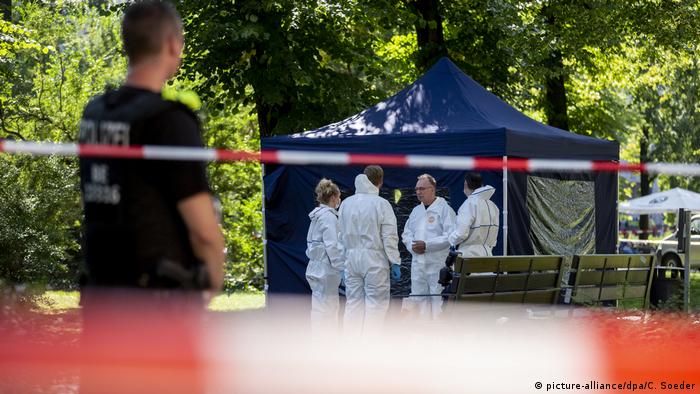 The Kremlin on Wednesday issued a denial of any involvement in the slaying of Georgian man who had fought against Russian forces in Chechnya. Zelimkhan Khangoshvili, 40, was shot dead in a park in Berlin on August 23.

"This case has nothing to do with the Russian state or official agencies," said President Vladimir Putin's spokesman Dmitry Peskov.

Peskov added: "I categorically deny any link between this killing and Russian officials." He also said that questions regarding the 49-year-old Russian suspect picked up by German police would be better directed at the foreign ministry.

Khangoshvili was reportedly killed "execution-style" in the Kleiner Tiergarten park. The assailant approached the man from behind as he was walking to a mosque before shooting him twice and fleeing on a bicycle.

Police subsequently found a Glock handgun, wig, and bicycle in the nearby Spree river.

The victim has been described as a veteran of the Second Chechen War from 1999 to 2009, serving first as a field commander and then joining part of a Georgian counter-terrorist task unit. In 2012, he was part of a group of Georgian special forces who carried out an operation against militants who were holding hostages in the remote Lopota gorge, not far from the border of Russia's Dagestan republic.

Authorities believe the murder could be a revenge killing connected to Khangoshvili's military activity.

One of his sons told German media that his father had survived four previous attempts on his life, most recently in the Georgian capital of Tbilisi in 2015, prompting him to flee and seek asylum in Europe, where he has been living under assumed identities.

'Why did you kill my girlfriend?' — UK nerve agent survivor meets Russia envoy

Charlie Rowley's partner, Dawn Sturgess, was killed after being exposed to the Novichok nerve agent, which was used to attack ex-Russia spy Sergei Skripal and his daughter, Yulia, in Salisbury on March 4, 2018. (07.04.2019)

Salisbury: What we know a year after the Skripal poison attack

The attack on a Russian ex-spy and his daughter in the UK deepened tensions between Russia and the West, and the case still isn't closed. DW presents a rundown of investigations and reactions related to the incident. (04.03.2019)

Ofcom, Britain's communications watchdog, highlighted seven instances of problematic reporting by the channel. Its handling of the poisoning of former Russian spy Sergei Skripal in Salisbury played a large part. (26.07.2019)