How Russian media are reporting on the murder of a Chechen man in Berlin | Europe | News and current affairs from around the continent | DW | 25.09.2019

In late August, a Chechen man was shot dead at a Berlin park. Western media reported that the suspect may have ties to Russian intelligence services — but Russia has gone on the offensive to discredit the claims. 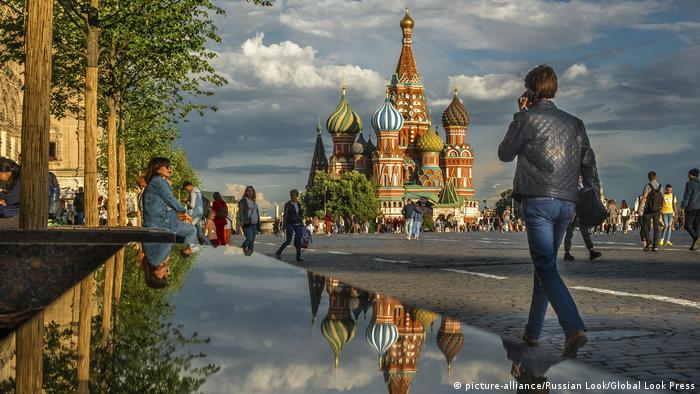 The murder took place in broad daylight. On August 23, 40-year-old Selimkhan Khangoshvili — a Georgian man of Chechen descent — was shot dead at lunchtime in a Berlin park. The suspect, a 49-year-old with a Russian passport, is believed to have used a silenced pistol to shoot Khangoshvili in the back and head. He was swiftly arrested.

Khangoshvili had once been a field commander of Chechen separatists and fought against Russia in the Second Chechen War. It is for this reason that Russian authorities had been searching for Khangoshvili. After surviving several attempts on his life in Georgia, Khangoshvili sought safety in Germany. According to investigative platform Bellingcat, German weekly Der Spiegel and Russian website The Insider, a range of facts regarding Khangoshvili's suspected killer and his passport suggests the involvement of the Russian intelligence services. Moscow has denied any involvement. 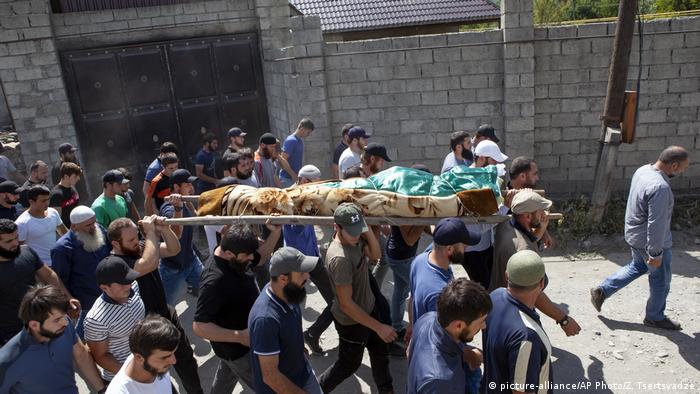 People carry the body of Zelimkhan Khangoshvili during the funeral in Duisi village, the Pankisi Gorge valley, in Georgia

That's why how the case was reported in Russia media is noteworthy. Russian daily Kommersant, for instance, wrote that another Chechen was responsible for Khangoshvili's death. It cited "acquaintances of the victim," without however naming them or providing additional information. The paper wrote that these unnamed acquaintances had said Khangoshvili had been an "influential fighter" and that only other Chechens would have been able to kill him. The acquaintances supposedly said it was Chechens from Russia or those who had fled to Europe who murdered Khangoshvili. Several other Russian media outlets picked up the story, including Russia's Interfax news agency.

Russian media also reported that Khangoshvili had an Islamist background. Indeed, German authorities had him temporarily listed as a potential Islamist terrorist after a tip from Russia's intelligence service. Later, however, he was removed from the German watch list. Numerous Russian media outlets, meanwhile, have continued to insist that Khangoshvili is an Islamist with ties to radical Chechens who fought in the Second Chechen War.

Several Russian media outlets have speculated over who might gain from a scandal involving Khangoshvili. The country's state-run Rossija 24 television station accused DW and German daily Der Tagesspiegel of reporting about a possible Russian involvement in Khangoshvili's death because this was more "interesting and exciting" than other stories. A host on Rossija 24 even accused Western media of peddling conspiracy theories.

Although there is no evidence that Khangoshvili's murder is in any way connected to the G7 or the construction of the Nord Stream 2 gas pipeline, Russian media have speculated about possible links. Broadcaster Rossija 24, for example, said German Chancellor Angela Merkel had needed "strong arguments" to convince other G7 member states to not allow Russia to rejoin the group.

And Russian news agency Ru-AN even went so far as to suggest the US and other European states were trying to stir up media coverage of the murder case in order to prevent the controversial Nord Stream 2 pipeline from being completed.

International investigative platform Bellingcat, which has looked into Khangoshvili's murder and also the MH17 crash in eastern Ukraine in 2014, has been singled out in particular. Nimmo said, "The Kremlin has been waging a long campaign to discredit Bellingcat — after all, their researchers are very good at what they do."

Nimmo, however, said the world is not witnessing a large-scale disinformation campaign comparable to the one after the assassination attempt against double agent Sergej Skripal in England, or after the downing of MH17. He says much will depend on how Germany treats the Khangoshvili case. Nimmo expects that if it quits the investigation — Russian disinformation will cease. But if Moscow is accused of any kind of involvement, Nimmo said: "We can expect to see a large disinformation campaign."