Leaders of Ukraine, Russia, Germany and France have agreed to revive their "Normandy format" Ukraine talks for the first time since 2014. The renewed effort follows several breakthroughs over the summer. 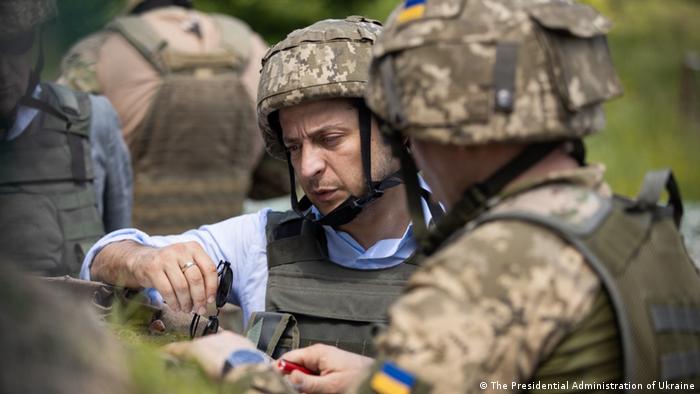 The Elysees Palace said there had been "major advances" in negotiations since summer, including troop withdrawals by both sides and prisoner exchanges.

It will be the first leaders' summit as part of the so-called Normandy format — shorthand for France and Germany acting as mediators between Russia and Ukraine — to be held since 2016. Talks have continued in the format at ministerial level though.

The Ukrainian military has been fighting Russian-backed separatists in the two easternmost regions, known as Donbass, for more than five years. The fighting broke out early in 2014, after Ukraine's pro-Russian president was toppled and Russia subsequently annexed the Crimean Peninsula.

Since his election in April, Ukrainian President Volodomyr Zelenskiy has made a priority of resolving the conflict with pro-Russian rebels in the east. In July, Zelenskiy — previously a comedian and actor — made a YouTube appeal to Russian Presdent Vladmir Putin.

"We need to talk? Let's talk," he said. "Let's discuss who Crimea belongs to and who isn't in the Donbass region."

Putin responded by saying this would be "more or less be possible."

In late July, a meeting was organized by the Trilateral Contact Group on Ukraine, which includes representatives from Russia, Ukraine, and the Organization for Security and Co-operation in Europe (OSCE). A comprehensive ceasefire was agreed.

Some 13,000 people have been killed in the fighting according to the Untied Nations. Russia has denied any direct involvement in the conflict, presenting itself as an intermediary.

In the past several weeks, Ukrainian forces and the separatist rebels have pulled back from three front line points. Russia and Ukraine in September released 35 of the others' nationals who had been imprisoned.

In October, Ukraine signed a tentative agreement with the rebels on holding elections in the separatist-held areas.

That move led to criticism from some Ukrainians who claimed it amounted to a capitulation to Russia.

Kyiv government forces and pro-Russian troops have started withdrawing from the eastern Ukrainian town of Zolote. The move is a key precondition for German- and French-mediated talks between Ukraine and Russia. (29.10.2019)

News of a potential breakthrough to end the ongoing conflict in eastern Ukraine has been greeted as a positive step in Moscow and Berlin. Opposition in Kyiv, however, called it capitulation. (03.10.2019)