Fischer Establishes German Outpost in Kaliningrad | Europe | News and current affairs from around the continent | DW | 12.02.2004

After 65 years of absence, the German government appointed its first official diplomat to the Russian enclave of Kaliningrad on Thursday. The former Prussian city has belonged to Russia since World War II. 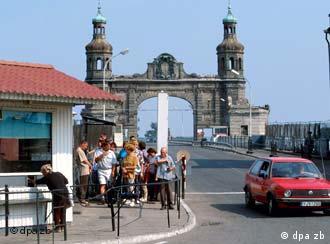 Kaliningrad will be landlocked by the EU, including Lithuania whose border is picture here, as of May 1.

Describing the step as a "sign of confidence" of the determination of Germany and Russia to forge a common future, German Foreign Minister Joschka Fischer opened his country's first diplomatic outpost in the Russian enclave of Kaliningrad on Thursday.

The events celebrating the posting of Germany's first consul general also marked Fischer's first trip to the former East Prussian capital of Königsberg, which came into Russian hands after World War II. More than 7,000 Russians of German origin live in the enclave.

"The past is part of our identity," Fischer said, "but it is also part of the current relations between Germany and Russia. The lessons we have to learn from the past are the basis for Germany's special commitment to peace and reconciliation, to European unity and close cooperation with Russia."

Kaliningrad will be completely enclosed by the European Union after neighboring Poland and Lithuania become member states on May 1. The enclave's post-accession status precipitated long and difficult negotiations between Russia and the European Union over transit rights for Kaliningrad's citizens, who will soon have to cross EU territory when traveling to the Russian mainland. However, in 2002 leaders from Moscow and Brussels reached an agreement establishing a simple travel document for local residents. With the difficult matter of the transit status of Kaliningrad's citizens behind them, Russia and Europe are now working to boost relations between Kaliningrad and its neighbors.

"This is an important sign of confidence in the foundations of our relationship and proof that Russia and Germany are united in wanting to shape our future together, that the Russian government and the European Commission after long, sometimes troublesome negotiations can solve the issue of transit, which is important for both sides," said Fischer. "I hope that will soon also be the case in the area of goods transport, so that we can create the conditions for a successful, cross-border cooperation between the European Union and Kaliningrad."

Up until now, residents of Kaliningrad had to travel to Moscow in order to get a travel visa to visit Western European countries that are part of the Schengen open borders agreement, but once the consulate is up and running, they will be able to take care of visa applications at the German post.

Plans for a Kaliningrad consulate have been in the pipeline since the early 1990s, but were held up by Russian concerns -- mostly among nationalists and Communists -- that post-reunification Germany might want to reclaim the former Prussian territory. In 1994, then-President Boris Yeltsin put a perfunctory stop to the venture, citing "considerable resistance from parliament and sections of the public." Along with the German embassy in Moscow, Germany has consulate generals in St. Petersburg, Saratov and Novosibirsk.

It was only in 2003 that President Putin and German Chancellor Schröder dusted off the project and agreed to open a German consulate general in the Russian enclave -- the main impetus being the EU's imminent eastward expansion, which will leave Kaliningrad geographically isolated from Russia.

Kaliningrad governor Valdimir Jegerov welcomed the move, saying, "It's an important signal that our concerns are being taken seriously in the European Union," and adding that "more German businesses may now take the opportunity to invest in Kaliningrad."

Cornelius Sommer, who has been appointed as consul general, is still searching for a home for the German diplomatic representation. He is currently residing in a hotel. However, the government is planning to open a visa department by summer.

After opening the consulate, Fischer traveled on to Moscow, where he is expected to meet with Russian Foreign Minister Igor Ivanov and President Vladimir Putin at the Kremlin. He is expected to discuss the latest developments in Iraq and the international war on terrorism before returning to Berlin late Thursday night.

Kant as a cultural bridge 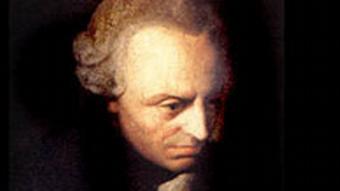 Fischer chose Thursday to open the consulate because it marks the 200th anniversary of the death of the German philosopher Immanuel Kant, who lived and died in the East Prussian trading city. The German foreign minister has described Kant (image) as a major influence on his own political development, and a thinker whose theories helped shape contemporary politics. Kant's 1795 essay "Perpetual Peace" explored the idea of a world federation of republican states, providing a blueprint for today's concept of the United Nations.

Kant is also seen by many as a bridge between Germany and Kaliningrad, and a symbol of the Russian city's German past, when the city played a significant role as a port and center of academic excellence.

In honor of the philosopher, Fischer placed a wreath over his grave on Thursday.

A Philosopher for the Modern Age

"Kant is the most influential thinker of the Modern Age"

After causing devastation in Cuba, Ian was forecast to strengthen further before arriving in Florida as a major storm.