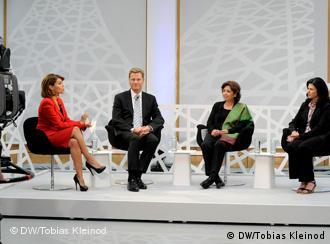 More dialogue in a time of upheaval: Deutsche Welle will begin broadcasting its new television channel for the Arab World on September 12, 2011. Audiences from Morocco to Oman can tune in to a six-hour block in Arabic – always in primetime throughout the region. DW-TV ARABIA will continue to inform its viewers about the most important developments in Arab countries, Germany and the rest of the world.

Deutsche Welle continues to implement its strategy by introducing new, regionalized productions to help improve the connection to its viewers around the world. Germany’s international broadcaster is offering the possibility to engage in dialogue about regional issues – especially with its talk shows with representatives from Germany and the Arab World. DW-TV ARABIA will now broadcast a block of programming in Arabic during primetime. English-language programming will complete the channel’s 24-hour line-up. Up until now, the schedule alternated hourly between Arabic, or German with Arabic subtitles, and English.

The initial broadcast will feature Germany’s Foreign Minister Guido Westerwelle, Mohammed ElBaradei, as well as young bloggers from Germany and Egypt, who will discuss the latest developments in the Arab World. The talk show will be recorded on Thursday, September 8, 2011 at 4:30 pm in Germany’s Federal Press Conference building in Berlin. It will be moderated by Dima Tarhini from DW-TV ARABIA.

The core of the new DW-TV ARABIA schedule will be made up of four 30-minute segments of “Journal” – Deutsche Welle’s news flagship. There will also be Arabic versions of “Arts.21” and “GLOBAL 3000”. In addition to “Quadriga”, there will be four new talk shows added to the mix. These will all be conducted and broadcast in Arabic and offer viewers the chance to participate while shedding light on the changes in the Arab World.

The target audience for DW-TV ARABIA is made up of viewers in the Arab world who are interested in Germany and the German position on international and regionally-relevant issues and who expect reliable information about their own country from Deutsche Welle – Germany’s international broadcaster. “With DW-TV ARABIA’s consolidated schedule, we are offering attractive programming in Arabic for our target audience between Morocco and the UAE,” says Deutsche Welle’s Director of Television, Christoph Lanz. “In an era of such political instability, we are meeting the needs of our viewers by offering reliable news, insights and information.”

Deutsche Welle began broadcasting in Arabic in 2002 with a two-hour block, which has been continuously expanded over the years. DW-TV ARABIA can be received via Nilesat and Arabsat/Badr 4 between Morocco and Oman as well as in Europe.