Coronavirus: Germany is no longer a role model | Germany | News and in-depth reporting from Berlin and beyond | DW | 07.12.2020

Coronavirus: Germany is no longer a role model

Germany had hoped that a partial lockdown would be the best way to tackle the second wave of the coronavirus pandemic. But infection rates are still high and the number of people dying from COVID-19 is rising. 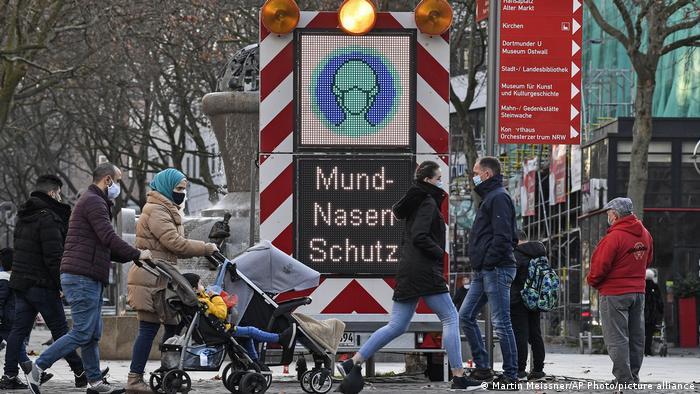 When coronavirus infection numbers started to rise exponentially, German states introduced restrictions in November. They were hoping this would pull rates of infection back down to an acceptable level. At the beginning of November, restaurants, cafes, and bars were ordered to shut down. Theaters, cinema, fitness studios, and many other similar businesses also had to close their doors.

Retail outlets were allowed to stay open, as were schools and kindergartens. The idea was in essence to shut down large sections of the leisure sector while keeping much of the rest of the economy turning over. Work, yes. Play, no. As a result, Germany has become a stay-at-home country.

While most Christmas markets for which Germany is so famous will not be working their magic this year, some restaurant owners are doing what they can to bend the rules as much as possible. So, there are plenty of long lines in front of restaurants where"mulled wine to go" is the seemingly irresistible draw. Anything to keep business ticking over – and not be totally dependent on government loans and subsidies. 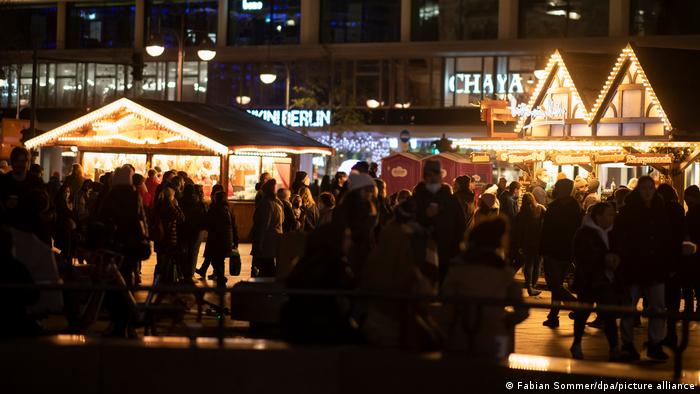 Stalls selling mulled wine have popped up on Berlin's streets

In some towns and cities, such as Berlin, isolated Christmas stands have gone up. People get excited and gather around, seeking some warmth and comfort. But as the alcohol begins to take effect, social distancing is forgotten and people rub up against each other while standing in the long lines. Some guests refuse to "move on" even though it is actually against the law to stop and join others.

Increasingly, police are being asked to step in. The southern state of Bavaria, where coronavirus rates are frighteningly high in some places, is beginning a tough crack-down, completely banning outdoor sales of alcohol from Wednesday this week.

Two other states, Baden-Württemberg and Saxony, have either already followed Bavaria's lead, or are planning to do so.

The German constitution grants far-reaching powers to the country's 16 federal states. Among their prerogatives is the right to take charge of protection against infectious diseases. What is allowed and what not is decided at the state level and not by the federal authorities in Berlin.

However, the federal government does have one trump card: The chancellor, Angela Merkel, a strong advocate of tough measures to combat the pandemic. There have been a number of fierce showdowns between the influential chief ministers of the federal states on the one hand and the chancellor on the other. And Angela Merkel has generally come out of those fractious gatherings much worse for wear.

Many commentators note that the relentless squabbling of recent weeks has resulted in an unsatisfactory and contradictory "patchwork" of measures, making a solution to the challenges Germany is facing seem far off.

The most recent example: Chancellor Merkel and the 16 heads of the federal states had given the go-ahead for a partial easing of rules regarding family get-togethers for the immediate Christmas season.

But in Berlin itself, city authorities announced there would be no easing of contact regulations because the situation in the capital is viewed as so dire. But then, as if to prove how determined they are to create a mood of destabilizing contradiction, the Berlin authorities also ordered that stores could open for Christmas shopping on last week's Advent Sunday – a shopping and leisure occasion that is deeply cherished in Germany. It turned out temperatures were unseasonably warm and shopping areas were, to put it mildly, bustling.

It was hardly a surprise when on Monday government spokesman Steffen Seibert stated that infection rates in Germany are a "cause for concern." He added: "We are a long way from turning the tide." The partial lockdown has already been extended twice, now going through to January 10th. Not many people, though, are betting on it being the last extension.

During the first wave of the pandemic Germany was applauded for its efforts to combat the deadly virus. In spring, new infections peaked at 6,000 a day. Now they are about four times that number.

More than 4,000 COVID-19 patients are currently being treated in intensive care units across the country. In spring, that same figure peaked at 2,850. DIVI, the association that represents Germany's emergency and intensive care doctors, reports that every second ventilated patient is now dying in hospital.

"We simply can't accept such a high number of fatalities here in Germany," said Bavaria's Chief Minister Markus Söder. In November, he attracted a lot of attention when he said that so many people were dying that it was like a plane crash every day. Now, just a few weeks on, that dreadful comparison is already well out date.

But there is no public outrage. It almost seems as if the high rate of fatalities has had no alarming impact. This is what psychologists call habituation. What it means is that people get used to ongoing catastrophe. If you are confronted with horror often enough, there comes a point where it is no longer horrific.

People are yearning to return to their "normal" lives

The overall mood in Germany has palpably worsened: a trend that is accentuated by the cold and damp, as winter takes hold.

Against this backdrop, it is hardly surprising that the latest opinion survey results put out by Germany's ARD TV channel suggest that one-in-two respondents say they would welcome an easing of rules and regulations over the Christmas period. Of course, that would also seem to indicate that most of those people do not have much confidence in the measures in the first place.

So, the question is: would a hard lockdown be better? And would it be a more tempting option if it were coupled with the prospect that things might indeed begin to get back to "normal" after the tough medicine? It is a strategy that has been pursued by a number of other European countries. In Belgium, for instance, infection rates are down. In France, too. And it also seems to have worked in Israel.

A threat to the economy

But, for the powers that be, it would pose some very serious questions. After all, a full lockdown would surely deal a devastating blow to the economy. The state would again have to move in with massive sums to prop up businesses small and large. New net borrowing for the current fiscal year has already reached nearly €160 billion ($190 billion.) For 2021, that figure is already set to rise.

And that sum would certainly not suffice in a hard lockdown. It would also leave politicians having to admit they got it wrong. In the same way they got it wrong by clinging to the strategy that, come what may, schools and kindergartens must stay open.

So, where on the learning curve are Germany's political leaders? For his part, Economics Minister Peter Altmaier has come out with this: "It can be said, indeed it must be said, that our efforts to date have not gone far enough to really break the second wave of the virus."

What happens next? That is the inevitable question. People in Germany are fond of talking about Christmas as a time of Besinnlichkeit, or contemplation. And rarely in recent decades has this country needed quiet contemplation quite as much as it does now.

Pandemic profits: How some made billions during the COVID-19 crisis

While many industries have taken a hit during the coronavirus crisis, others have been on a tear, producing newly rich people or making those already rich even richer. There are also a couple of Germans among them.