Coronavirus: Germany′s confusing patchwork of restrictions | Germany | News and in-depth reporting from Berlin and beyond | DW | 12.10.2020

Residents from Germany's increasing number of high-infection areas are banned from staying in hotels in parts of the country — but not everywhere. The patchwork of regulations is leading to more and more confusion. 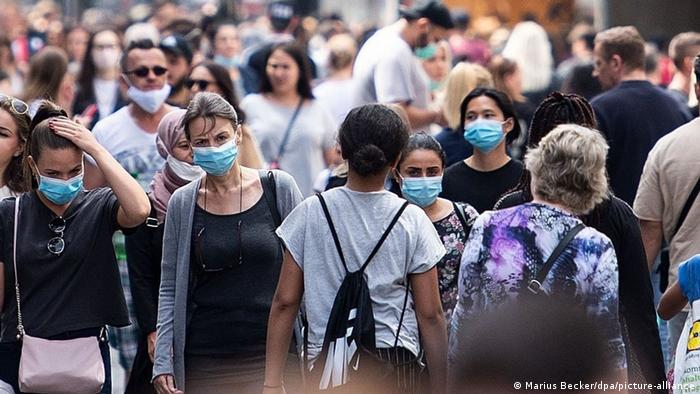 Germany's latest guidelines aimed to curb the spread of the coronavirus are affecting everyday life across the country. Even the highest court has been impacted: The Constitutional Court, in the southwestern city of Karlsruhe, is due this week to discuss CETA, a controversial trade deal between the EU and Canada. Left Party Bundestag member Amira Mohamed Ali is one of the plaintiffs and needs to attend. But the government of Baden-Württemberg, where Karlsruhe is located, has imposed an "accommodation ban" on travelers from high-infection areas, like Berlin. So Ali will have to get up bright and early to make the six-hour journey to Karlsruhe, where the hearing will start later than usual. And, in the evening, embark on another six-hour journey back to Berlin — unless she decides on a stopover on the way in the state of Thuringia, which has decided against such a ban. No wonder people are confused!

The new magic formula in Germany's battle against the virus is to measure the number of new cases per 100,000 residents in one area in the course of seven days. If the figure is over 50, then that town or those regions become high-risk areas.

Read more: Coronavirus vaccination — What are we actually waiting for?

That list already includes most of Germany's most populous cities and much of the densely populated northwestern state of North Rhine-Westphalia.

This, of course, worries people in sparsely populated regions like Schleswig-Holstein in the north, which live off tourism. They worry that travelers from high-risk regions will bring the virus to rural areas like theirs, where the numbers have so far been low.

Nevertheless, Manuela Schütze of the Schleswig-Holstein Tourism Agency told DW: "There is no entry ban in our state. The list of areas worst-hit by the seven-day formula is constantly being brought up to date, and anybody who comes from those regions has to have a negative coronavirus test from the last 48 hours." Exceptions are, however, made for people visiting family members and business travelers.

With most of Germany's federal states now calling on people to take tests before traveling, there have been long lines at testing points in places like Berlin. Many Germans skipped their traditional summer holidays in southern Europe. Now, more than ever, they hope to enjoy the fall break, even if it only means just a few days off inside Germany's borders.

So are the politicians going to back down on the "accommodation ban"?

Berlin's mayor, Michael Müller of the Social Democrats (SPD), told public broadcaster ZDF he believed that enforcing such a ban between Berlin and the surrounding state of Brandenburg was absurd, given the hundreds and thousands of commuters who regularly travel between the two.

Christian Lindner, leader of the business-friendly opposition Free Democrats (FDP), said: "This across-the-board clampdown on freedom of movement within Germany is out of all proportion."

Avoiding a new lockdown at all cost

As coronavirus infection rates are once again on the rise, a raft of new regulations has been implemented, which again vary from state to state.

But all politicians want to ensure that schools and childcare centers remain open this time around.  They especially want to prevent a rerun of the lockdown that badly hit German industry and business earlier in the year.

"We need regulations that allow economic activity to continue to flourish, instead of getting in the way of business," economist Clemens Fuest, head of the influential German Ifo Institute for Economic Research, stressed on Monday.

That sentiment was echoed by Economics Minister Peter Altmaier of the governing conservative Christian Democrats (CDU): "We have learned a lot in the last six months. We now know much more about what is dangerous and what is not," he told the mass-circulation Bild newspaper

Most experts agree that travelers returning from holidays in the summer months were responsible for a significant rise in infections. But now they mainly blame social gatherings without masks or social distancing for the latest rapid increase.

So most states have implemented restrictions on the number of people who can meet in public. Berlin has ordered bars and restaurants to close by 11 o'clock in the evening. Violation of the ban can carry a fine of up to €5,000 ($5,900). Bavaria has introduced a €250 fine for anybody who refuses to wear a mask as stipulated.

The 16 state premiers are to meet with Chancellor Angela Merkel on Wednesday in a fresh attempt to streamline the measures.

Virologist Christian Drosten, who has become a household name in recent months, has warned: "The virus will spread more and more; and we will increasingly find ourselves in a situation where we have to adopt uniform measures." For the time being though, such a streamlined approach seems a long way off in Germany, where federal structures are hampering a unified approach.