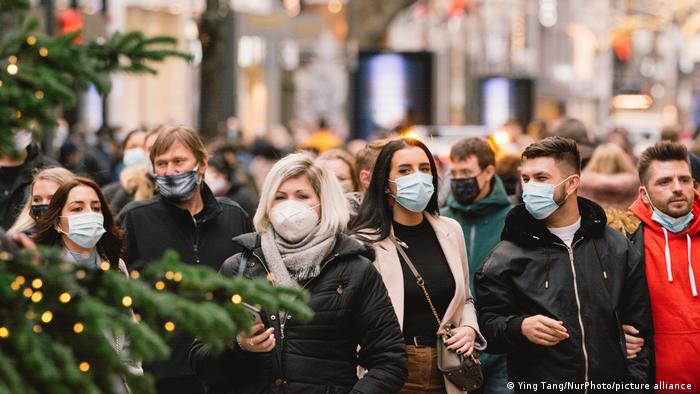 A narrow majority of Germans agree with the decision to loosen restrictions on how many people can meet during the Christmas holidays, according to a new poll published Thursday.

In a representative Deutschlandtrend survey, conducted by German broadcaster ARD, 53% of respondents said they agree with the looser restrictions for Christmas, while 44% disagreed.

The same cannot be said about New Year's Eve celebrations. Some 68% of respondents disagreed with the decision to loosen rules for New Year's, while 30% think it's the right call. 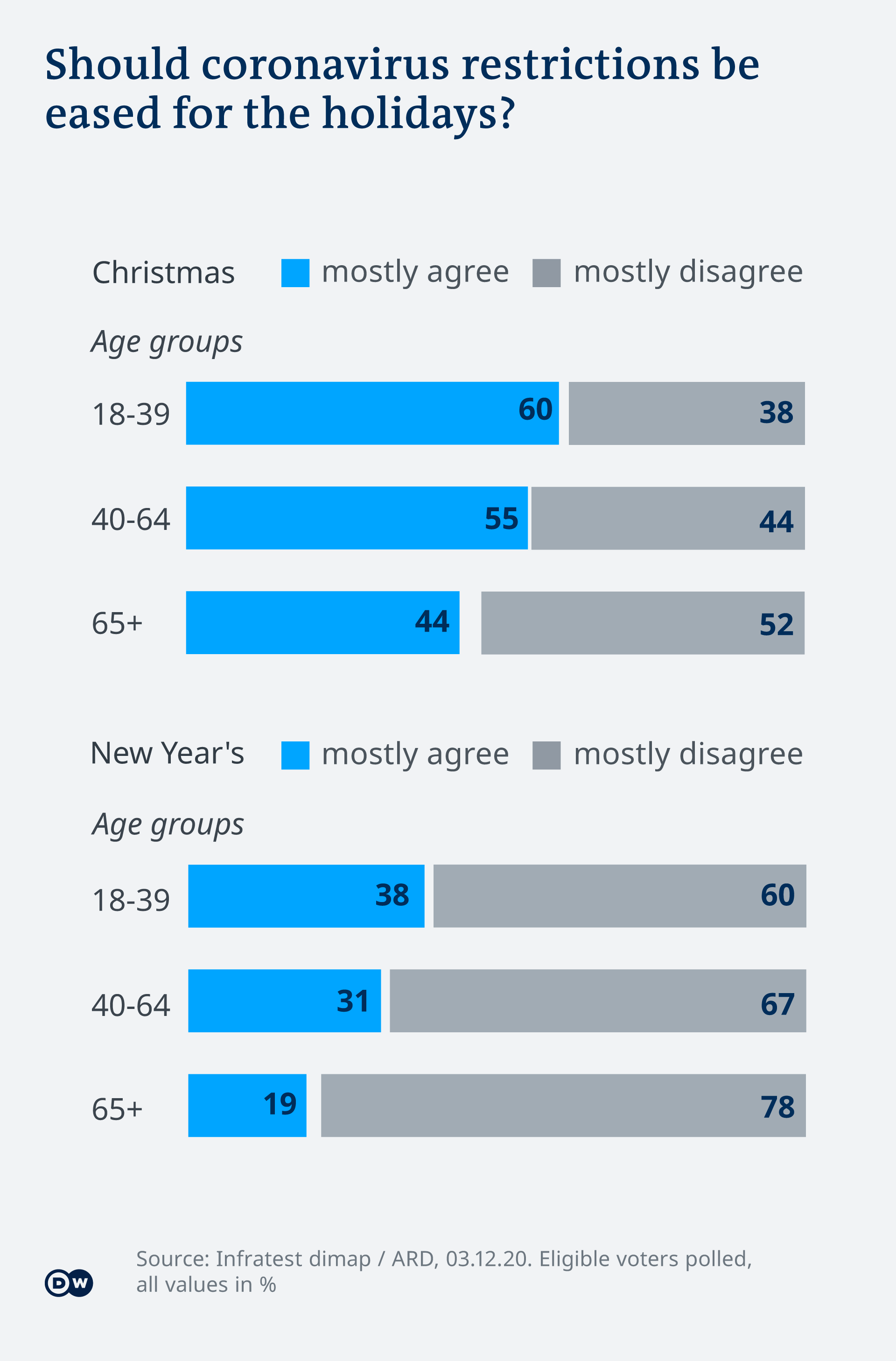 Chancellor Angela Merkel and the leaders of Germany's 16 states recently agreed to a so-called Christmas amnesty, which will slightly relax social distancing rules between December 23 and January 1.

It's up to state leaders though to decide how much to relax the rules over the holidays, but it's generally expected that private gatherings of up to 10 people will be allowed regardless of the number of households.

Under Germany's current partial lockdown, almost all private gatherings are capped off at five people from a maximum of two households.

While some have been staging protests against coronavirus measures, the vast majority of Germans — 62% — are not worried that their personal freedoms and civil liberties will be impacted on a long-term basis.

However, the number of people who are "very worried" about long-term impacts on their civil liberties rose by four points to 18% in the latest poll compared to results from May. 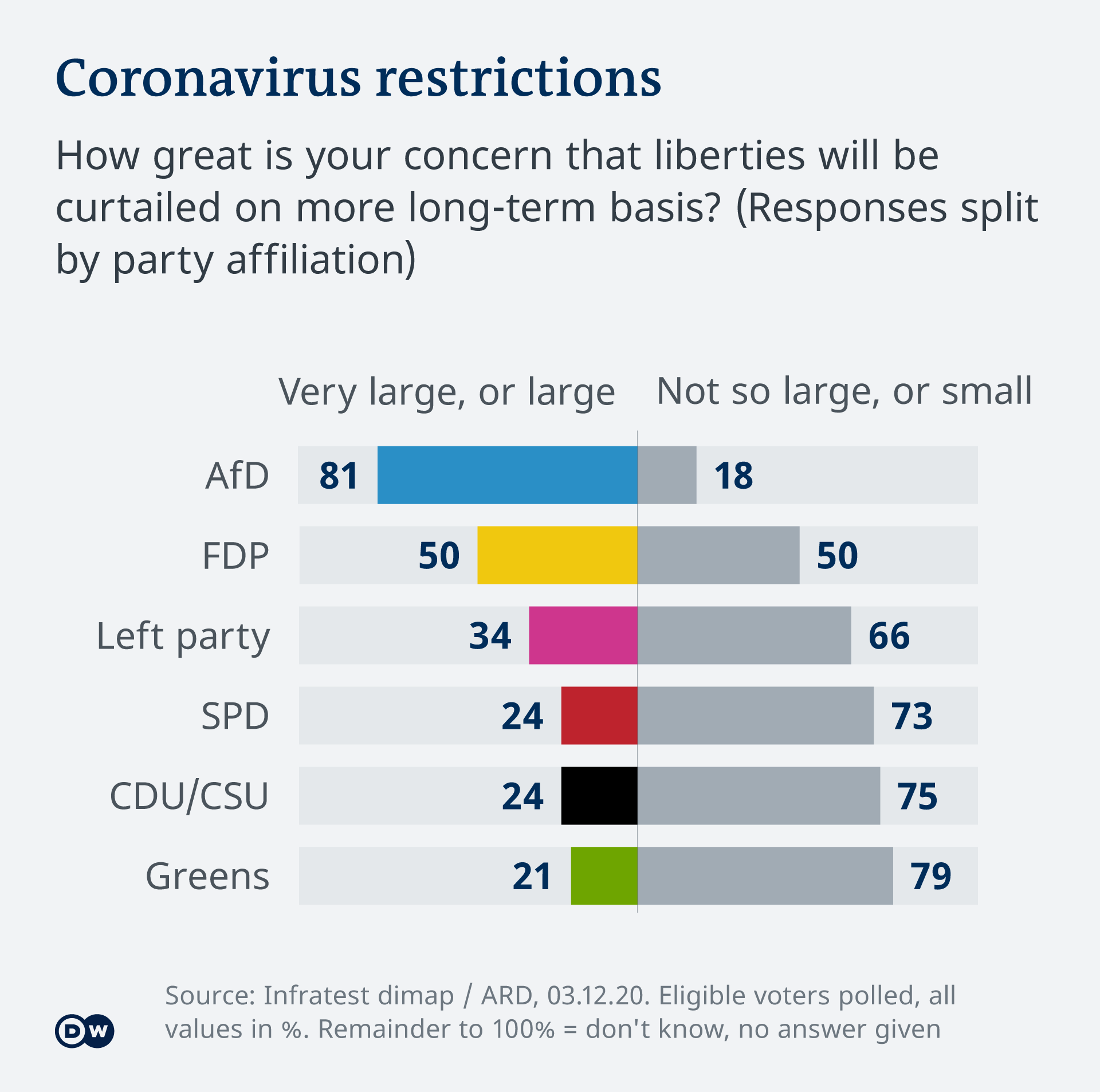 The latest poll revealed an uptick in anxiety among the German public about the ability of the country's medical system to cope with the pandemic.

Some 36% of people surveyed said they were "concerned" or "very concerned" that coronavirus patients may not receive adequate medical care — a rise in 15 points compared to results from May.

The majority, however, ranked their concerns about Germany's medical system lower.

Overall, people in Germany support the government's measures to curb the spread of the coronavirus — with 53% responding that the measures "are appropriate" while another 18% believe they do not go far enough.

Germany is still far off from curbing its second wave, with over 22,000 new daily cases reported on Thursday, according to tallies from the Robert Koch Institute (RKI) for infectious diseases. Over 1.1 million people in Germany have become infected since the start of the pandemic, while over 17,600 people have died.

Germany's Christmas markets, collections of festive shopping stalls and mulled wine stands in city centers, are shuttered because of the pandemic. But a company in Cologne is trying to do what little it still can.

Christmas shine despite the coronavirus: Germany's cities are festively lit

Most Christmas markets in Germany have been canceled. What remains is festive lighting in many cities. A journey through pre-Christmas Germany: From Lübeck to Nuremberg.