Intensive care units (ICU) at some German hospitals are reaching full capacity with seriously ill COVID-19 patients, the country's hospital federation said. A high percentage of nurses are off sick or in quarantine. 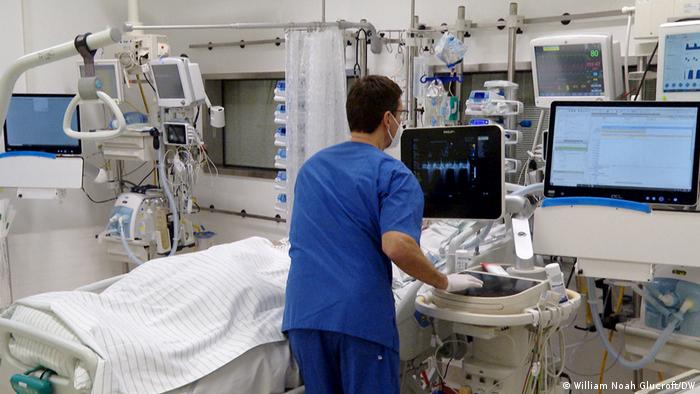 Some German hospitals are reaching their limits as they struggle to cope with the second wave of the coronavirus pandemic, the head of the German Hospital Federation (DKG) has warned.

In an interview with the Welt Am Sonntag newspaper, DKG President Gerald Gass said there are currently 40% more COVID-19 patients in intensive care units (ICU) than during the first wave in the spring.

DKG said around 16,000 patients are being treated for the disease on non-critical care wards.

The comments come just days after Chancellor Angela Merkel warned that the country would remain in a partial lockdown until January to stem a major surge in cases.

Gass said that smaller hospitals and those in rural areas have hardly any capacity left and are having to turn away non-COVID patients.

He told the paper that in some German states, like Saxony, the number of ICU patients is five times higher than in April.

Gass denied that hospital executives were exaggerating the crisis to force the German government into offering more financial aid.

"We clearly reject the accusation of alarmism," the DKG chief said.

Last weekend, one of the largest hospitals in Germany, Vivantes in Berlin-Neukölln, said it would no longer accept emergency patients.

According to the report in the newspaper Tagesspiegel, 85% of the hospital's 1,200 beds are currently occupied.

Hospitals in the German capital say their resources are being increasingly stretched by critically ill COVID-19 patients.

Other senior German hospital executives have warned of a shortage of medical teams to tackle the surge in seriously ill COVID-19 patients.

Gernot Marx, who heads the Clinic for Operative Intensive Care Medicine at the University Clinic in Aachen told Welt am Sonntag that the "limiting factor is not the lack of ICU beds, but appropriately qualified staff."

Thomas Werner, a clinical expert at the Berlin Medical Association, told Tagesspiegel that about 15% of nurses are absent from most wards  — because they are sick themselves or are in quarantine.

German Chancellor Angela Merkel has said she is hopeful the vaccinations will help in the fight against COVID-19. Meanwhile, Britain is preparing to roll out the first BioNTech-Pfizer shots. Follow DW for the latest.