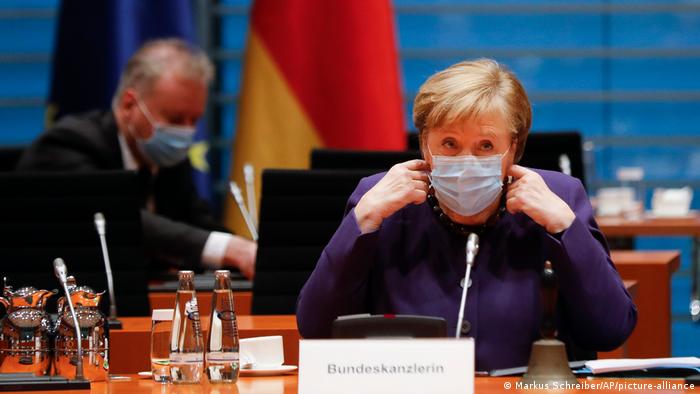 As German lawmakers prepare to debate the government's 2021 budget, Chancellor Angela Merkel has warned that the huge aid commitment made to tackle the coronavirus pandemic can't last indefinitely.

In her weekly video podcast, Merkel said as a result of the health crisis the country now carries a very large debt burden, which would need to be paid off starting in 2023.

But she acknowledged that the cost to the German economy and society would have been "even higher" if the government had not stepped in with an unprecedented package of support to shore up businesses and the public.

Since the beginning of the pandemic, it has been the federal government's goal to "mobilize our country's financial resources to counter the crisis," she added.

Germany in a strong position

Merkel said the huge sums committed both this and next year were only possible because the government had maintained a budget surplus in previous years.

The chancellor added that the grants and support programs offered by the state had created a "solid basis for the time when the pandemic is under control.

Then, she said, the German economy should be in a good starting position to grow again quickly.

But "the federal government, states and municipalities must work constructively and well together in order to overcome the pandemic and its consequences as well as possible," she cautioned.

Last month, the government announced plans to take on almost €180 billion ($218 billion) in new debt next year, which is almost double the €96 billion initially touted by Finance Minister Olaf Scholz.

The additional borrowing will be the second-highest net new debt in Europe's largest economy since the end of World War II and comes after the government already took on record-high borrowing of some €218 billion this year.

The fiscal plans required ministers to suspend the constitutionally enshrined debt limits in 2021 after parliament already abandoned them this year.

The Bundestag is due to vote on the new budget this week, but some opposition politicians have accused the government of using the health emergency to unleash a huge wave of public spending ahead of next year's federal election.

Germany's COVID restrictions will be extended at least until January 10, Chancellor Angela Merkel announced following talks with the country's 16 state leaders. "Generally things will remain as they are now," she said.