German retail shops in red as coronavirus pandemic drags on

Most shops have remained open during Germany's partial shutdown. But many customers are staying away. How will businesses cope during the lead-up to Christmas? 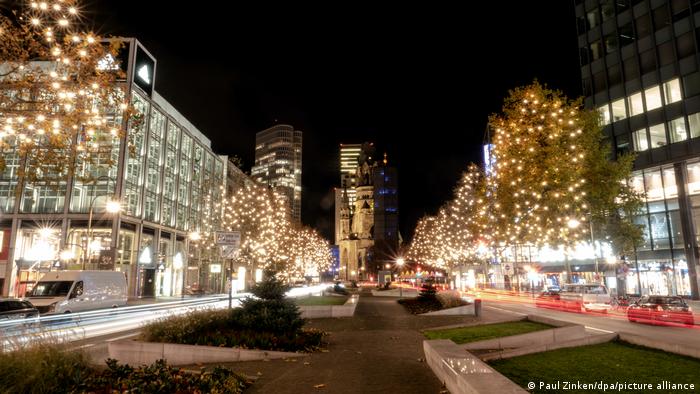 Berlin's historic Hackesche Höfe courtyard complex is eerily quiet as the 2020 holiday season approaches. Normally, this area in the heart of Germany's capital is bustling with visitors and locals alike. The complex houses numerous restaurants, cafes, a theater, an independent cinema and dozens of small shops that sell fashion, crafts and jewelry. Usually, business is good all year round.

But this is no ordinary year. As Berlin's hospitals fill with victims and the news about vaccines changes daily, the coronavirus pandemic has forced the restaurants, theater and cinema to shut. Many stores are open, but for reduced hours, as customers are rare. Fewer people frequent the complex: Many increasingly prefer to shop from the safety of their own homes.

Andreas Müller sits among glass vitrines displaying luxurious handcrafted Askania watches in his shop. There are no potential buyers in sight. The watchmakers, who have their workshop on the next floor up, are all furloughed at home, receiving state support. 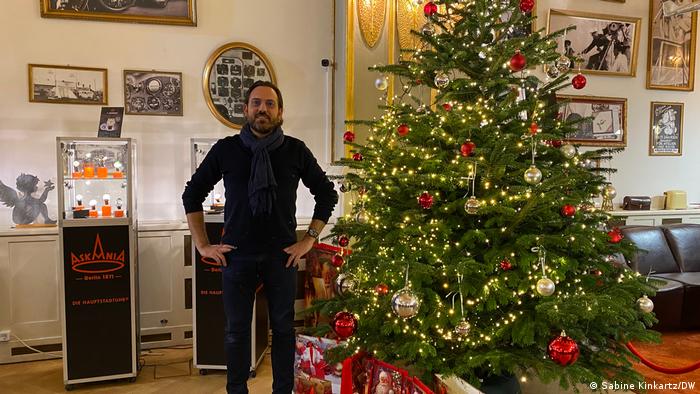 Askania has two shops in Berlin: one at Hackesche Höfe and a second on Kurfürstendamm in the west of the city. Müller said business was down at both shops, but Hackesche Höfe was the slower of the two. He said selling watches to tourists made up 90% of his revenue. But, because of the coronavirus pandemic, there are barely any visitors in town. "It is bad," Müller said.

Opposite his shop, a restaurant has been shuttered. Müller has placed two large parasols with chains of lights in front of the establishment to offset the glum appearance. A decorated Christmas tree, with a red star on top, stands nearby.

"We are trying to reach out to our regular clients through mailing lists and to generate publicity on social media, but it's not working that well," Müller said. Online sales have not proved a viable alternative. "You don't sell a €2,000 euro ($2,400) watch just like that," he said. "You need to talk to your clients, who need to feel the watch and hear its story." These are the early weeks of Germany's coronavirus winter. It could take months before Hackesche Höfe again fills with revelers and shoppers. Will businesses survive until then? A few nearby shops on Oranienburger street have already gone out of business, with vestigial signs in their windows telling clients to social distance inside the emptied spaces.

Anke Runge, who sells handmade bags, rucksacks and wallets at a close by shop on Tucholsky street, is deeply concerned. The designer has been running this shop for 23 years and made a name for herself within and beyond Berlin. Until the pandemic began, business was good, according to the red notebook in which she meticulously records the details of every sale.

The book testifies to the pandemic's effect on Runge's business. In November 2019, she made 44 total transactions sales, some of which covered several items at once. This November, however, she barely sold a thing. "Some days, not a single customer came to my shop," Runge said.

Runge said she had €4,000 left in her business bank account. "Tomorrow, €3,000 will be going out to pay rent," she said. How is she covering her expenses for herself and her son? "By going into overdraft," the 49-year-old said. Following the first coronavirus shutdown in spring, when all businesses were forced to shut, Runge received €14,000 in financial support from the city-state government of Berlin and the federal government. 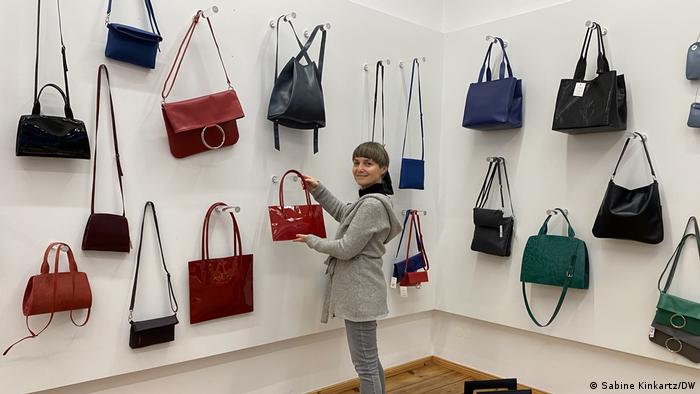 Business like Runge's were permitted to reopen in June. But, with fewer tourists in town, sales are down. She said she would apply for additional financial assistance from the state. "I will have to transfer that money instantly to my landlord," Runge said. She is angry that the financial fallout of the pandemic has not been distributed equitably. "My landlord owns this large building with commercial properties and apartments and keeps earning the full rent," she said.

Runge has tried several times to negotiate with her landlord about reducing the rent during the pandemic, but to no avail. "In spring, when it was allowed to temporarily stop paying rent because businesses had to close, my landlord called me and said I could go ahead but that we would have to talk about interest rate payments," she said.

The 100-square-meter (107.5-square-foot) shop includes a small workshop. She cuts leather for her various products at a desk. On her shelves, there large reams of leather. There are two sewing machines. And, above them, dozens of cotton reels, sit side by side and stacked on top of each other. "I have been running this business for so long," Runge said. "I helped make this neighborhood, with its shops and restaurants, what it is today." Even so, she said: "I do not know how things are supposed to continue."

Many shopkeepers share Runge's fear. Even larger businesses on major streets and in malls face questions about their futures. "Projections for Christmas season sales in this coronavirus year are worryingly bad for inner-city traders, and fashion outlets in particular," says Stefan Genth, who heads the German Retail Federation (HDE).

Without social gatherings and with most people working from, there is little demand for fancy handbags and the latest fashion. Sweatpants will do just fine — in fact, sweatpants sales are up.

An HDE survey of downtown shopkeepers found that 45% of respondents say the coronavirus pandemic is threatening their business. "Ultimately," Genth said, "entire city centers could be affected."

Usually, November and December are the most lucrative months for shopkeepers. "If they miss out on this revenue, many businesses will get into trouble," Genth said, But not all sectors are equally affected. Sales of household goods, home-improvement equipment, furniture and groceries are up. Online sales are surging, too. It is projected that this sector will grow its revenue by one-third in the lead-up to Christmas as compared with last season.

Runge received several orders through her website as well. She will send out the products by mail. "But," she said, "these are just a handful of orders." She added: "My bags are of better quality than big brands, which are more expensive, as well, but I'm not well-known enough for online sales to take off." Runge said the coronavirus pandemic had helped her realize that she has been slow to build up her online business.

Lately, Runge has been thinking a lot about her future. She wants to keep selling bags. To keep going, however, she would need to take out a large loan. She is unsure about the financial risks that that would entail and whether they can be quantified. After all, nobody can foresee how long the pandemic will drag on — or how things will develop afterward.

"This summer, the manager of a restaurant a few buildings down took out a loan to redesign her establishment to meet coronavirus safety standards for winter," Runge said. The partial shutdown that began as Germany approached record deaths in November, however, has meant that all restaurants have had to shut. "I have no idea how she plans to repay that loan," Runge said, shrugging hopelessly.