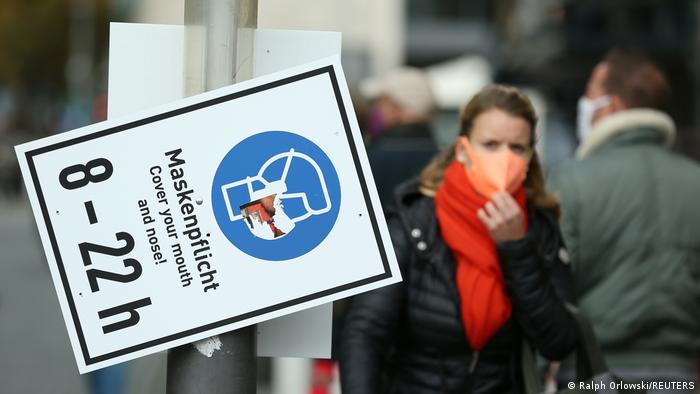 Officials at the Robert Koch Institute in Berlin said there had been 410 fatalities reported the previous day, eclipsing mid-April's record of 315 deaths.

It means that at least 14,771 people have died from the disease in Germany since the outbreak of the pandemic.

The institute also reported that there had been 18,633 new infections on Tuesday, bringing the total to 961,320.

German Chancellor Angela Merkel will meet federal state leaders later on Wednesday to discuss how to coordinate the country's coronavirus strategy for the rest of the year. The current shutdown is expected to be extended until December 20.

The public spending watchdog in Britain has said that the failure to stockpile key pieces of personal protective equipment before the pandemic left supplies low and forced the government to pay five times the normal price to meet demand.

France will start easing curbs this weekend so people will be able to spend the holiday with their families, French President Emmanuel Macron announced late on Tuesday. Macron said a vaccine could start being administered by the end of the year if approved by regulators.

In Spain, the local government in Madrid is also planning to ease restrictions on social bubbles ahead of the holiday season. It will allow family and social events to be attended by 10 people, rather than six, which is currently permitted. But the changes will only apply on key dates over the Christmas and New Year period, such as December 24, 25 and 31, as well as January 1 and 6, the latter of which is the much-celebrated Dia de los Reyes, or Kings' Day, in Spain.

Lithuania has extended its lockdown until December 17, when the country's new government is expected to take over.

Italy wants an EU-wide shutdown of ski slopes this winter in a bid to halt the spread of the virus. The call from Prime Minister Giuseppe Conte has drawn mixed reactions. Bavaria's premier Markus Söder backs the idea, but Austria's finance minister Gernot Blümel said, a ski shutdown would cost the nation around €2.4 billion ($2.8 billion) in lost revenue for the three-week Christmas vacation season.

"If the EU really wants [a shutdown] it has to pay for it," Blümel said, arguing the EU would have to compensate 80% of the revenue, in line with the Austrian government's own COVID-19 aid scheme for shuttered businesses.

Fashion-conscious shoppers in Japan can now protect themselves against the coronavirus in luxurious style, with opulent masks adorned with diamonds and pearls for a cool 1 million yen ($9,600) each. The diamond masks are embellished with a 0.7 carat diamond and more than 300 pieces of Swarovski crystal, while the pearl masks contain some 330 Japanese Akoya pearls.

Bars and restaurants in Japan's capital, Tokyo, will be asked to close early in a bid to halt coronavirus infections, the city's governor Yuriko Koike said on Wednesday. Businesses would be asked to close by 10 p.m. (1300 UTC) from Saturday until December 17 and will be eligible for cash assistance from the government, Koike said, urging people to stay home as much as possible.

A senior leader of India’s Congress party has died of COVID-19-related complications, his family has announced. Ahmed Patel, a legislator who was party treasurer and was seen as close to the Gandhi family who leads the party, is the second veteran from the opposition group to die under such circumstances in recent days.

The daily death toll from the coronavirus in the United States has surpassed 2,000 for the first since May. The daily record of 3,384 deaths came on April 14, in the early stages of the pandemic.

US hospitalizations for the novel virus exceeded 87,000 on Tuesday, an all-time high, while 30 of the 50 states reported a record number of COVID-19-related hospitalizations this month, meaning many of the country's hospitals are already full.

US and airline officials cited by the Reuters news agency say the White House may rescind entry bans on most non-US citizen from 26 EU countries, Britain, Ireland and Brazil.

Departing President Donald Trump had not made a final decision but the easing had the backing of public health and federal agencies, the sources said.

Many argued the bans, in place since mid-March on visits from Europe, and since May from Brazil, no longer made sense while easing would boost US airlines.

Bans on non-US citizens who had recently been in Iran and China would remain.

Airlines for America, an airline lobby group, said it had been advocating standardized national testing "in order to lift travel restrictions."

Last Saturday, the US Centers for Disease Control (CDC) recommended that air travelers "get tested" 1-3 days prior to their flight and 3-5 days afterwards, and "stay home for 7 days."

On Tuesday, IATA, the International Air Transport Association, said 2020 was likely to be its "worst" year ever, with revenue down by 60% because of the coronavirus.

IATA has pressed governments to introduce virus testing before departure to eliminate quarantine on arrival, often for up to 14 days.

Many airports have set up centers so passengers can undergo rapid antigen tests or more accurate PCR molecular tests, required by the country of destination.

President-elect Joe Biden will give a speech on Wednesday highlighting the upcoming challenges the country faces. With Thanksgiving on the horizon, and Christmas drawing nearer, Biden is set to plea with citizens to avoid the usual family gatherings with coronavirus infections surging across the country.

The address will focus on the sacrifices citizens are making during the holiday season, as officials across the country plead with Americans to stay at home and avoid large gatherings.

The state of New South Wales (NSW) in Australia will start easing social distancing rules in the coming days, as well as removing requirements for companies to allow employees to work from home, Premier Gladys Berejiklian has announced.

After almost three weeks without any locally transmitted COVID-19 infections, NSW will, from December 1, also allow restaurants, pubs and cafes to increase capacity.