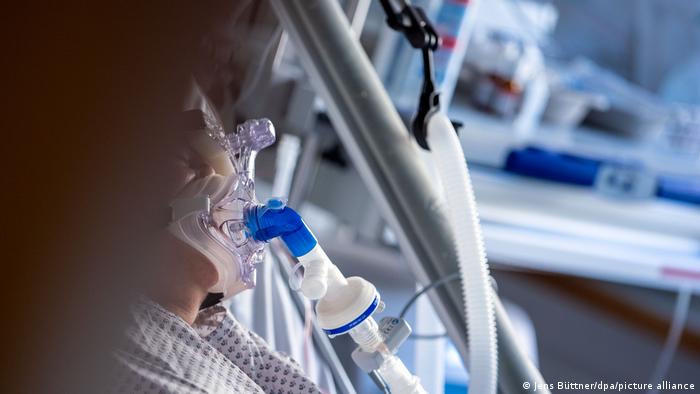 A subdued mood permeates the yellow-tinted halls of the intensive care unit at the Caritas-Klinik Maria Heimsuchung in Berlin's Pankow district.

High-tech machines whirl and beep. A dizzying labyrinth of cables and tubes connect them to screens displaying critical health data. The bare walls and linoleum floors emphasize the ward's sterility.

Doctors and nurses, in blue scrubs and white masks, keep the life-saving operation going around the clock. When not popping into rooms to check on patients, they're in the halls reviewing charts or chatting quietly with each other.

A bowl brimming with Christmas treats stands on the main desk.

The scene belies the stress the staff are under and conceals the presence of the highly infectious virus that has killed thousands of people in Germany this year. Nearly half of those deaths have occurred since the end of October.

"The situation is difficult," says Thomas König, who leads the ICU at the hospital. "We are constantly under strain. And we're only at the beginning of winter." 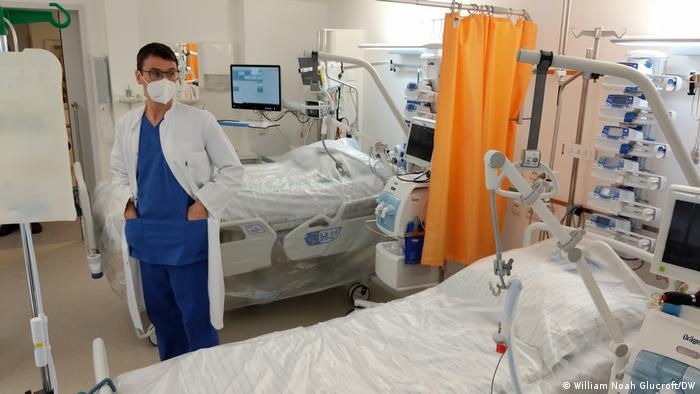 Thomas König has to leave ICU beds empty, because he has no one to staff them

König says he expects to see more need for ICU beds in the new year, as flu season kicks into gear. And the planned loosening of lockdown rules over Christmas has health experts worried about a post-holiday surge in cases.

But König has none to spare. All ten of his ICU beds are currently occupied. About half are keeping COVID-19 patients alive.

He says that has been the case for weeks. The only way to free up space is by transferring patients to other hospitals as part of a Berlin-wide plan known as SAVE, which was developed in the spring to allocate hospital resources for the pandemic.

"Having to keep COVID patients isolated only adds to the burden," he tells DW, adding they also have to stay longer in the ICU, on average, than other types of patients.

Two of his staff approach one end of the ICU, stopping outside a patient's room. A laminated red sign is clipped to the door. It is a checklist of safety measures for handling coronavirus cases and indicates the rooms with those patients.

Masks, glasses, gowns: Piles of extra protective gear sit on tables outside the rooms. The two medical workers quietly suit up before stepping in and sliding the door shut behind them.

At the other end of the hall, another room shows a very different picture. Two beds, besieged by monitors and IV bags hanging from hooks, sit idle, covered in plastic. They are ready to go, but König lacks the people to use them.

"ICU personnel have been stretched thin for years. We have far too few qualified nurses," König says. "The corona situation has exacerbated the situation." 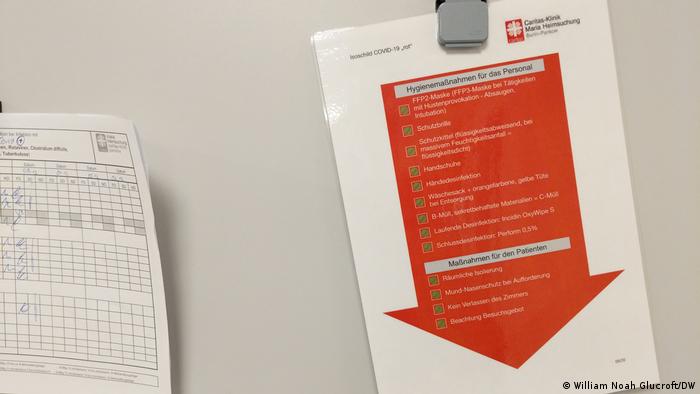 Germany has about 28,000 operational ICU beds, according to the German Association of Intensive and Emergency Medicine (DIVI). An additional 20% could be available, but cannot be used due to lack of staff.

"It's not that patients will have to be turned away," DIVI President Uwe Janssens, himself an ICU chief, tells DW. "But if things stay the way they are over the next several weeks, we are really uncertain how we will manage it all."

The burden is especially great in Germany's biggest cities, Janssens says, and it may be weeks before ICUs see any let-up. Berlin is accustomed to ICU occupancy rates of over 80%, which makes for a worrisome forecast with the potential of a post-Christmas wave of cases, combined with the regular flu season.

Germany-wide, the German Hospital Federation (DKG) estimates 4,700 jobs need filling in intensive care alone. The vacancies come at a time when around 30,000 medical workers have been themselves infected with coronavirus, according to Germany's Robert Koch Institute for public health.

In early November, as hospitalization rates spiked and Germany went into another partial lockdown, the DKG's Berlin branch sent out an urgent appeal to former and available registered nurses. 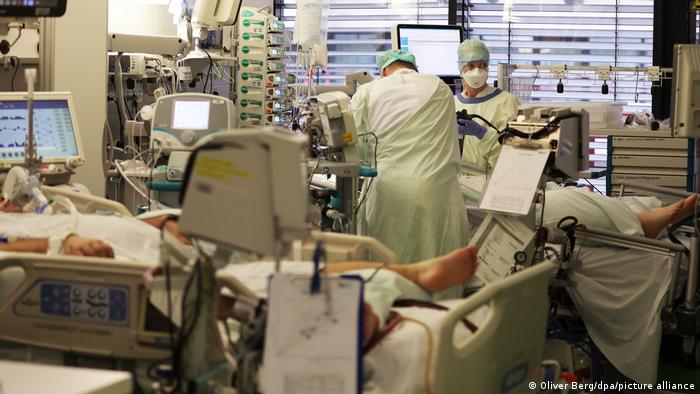 Germany wide there is a shortage in staff

Some of the shortfalls are made up for by nurses supplied by private contractors. The Caritas ICU brings them in sometimes, but they are less reliable than full-time staff.

"Some are really good and give it their all. But some just don't care. They come, do their job, and leave. That's the problem," König says.

They are also more expensive. The pandemic has impacted many businesses' finances, and hospitals are no exception. One way they make money is with regular operations, like knee or hip surgery. But many of these have had to be postponed to make way for COVID-19 patients.

The federal government was covering those losses for much of the pandemic. In March, the German parliament approved a wide range of financial support to help hospitals prioritize coronavirus treatment. This included 560 euros ($680) per day and patient for every hospital bed kept free and 50,000 euros ($60,800) for every extra ICU bed.

The relief program ran through September. An update, which started on Nov. 19, has more strings attached. For example, to receive aid hospitals need to have at least 75% of their ICU beds occupied and be located where the seven-day infection rate is over 70.

"The conditions contradict the legal requirements put forward by the state of Berlin to keep beds free," a spokesperson for the Berlin Hospital Association said in a statement, noting that financial discussions between the federal ministry and its state-level counterparts are ongoing.

While all this plays out on the political level, doctors and nurses forge ahead with what they have in their fight against COVID-19. They cannot win all of them, and Thomas König at Caritas-Klinik Maria Heimsuchung says his staff remains upbeat, despite the immense physical and psychological burden they carry.

"Death is part of working in intensive care or medicine in general," König tells DW. "But the important thing is knowing you've done everything possible."

Tessa Walther and Anja Köhler contributed to this report.