Berliners are debating the pros and cons of the latest anti-coronavirus measures. With much of the city labeled as "hot spots" due to alarming infection rates the government is clamping down.

Once again, COVID-19 is the talk of the town in the central district of Berlin-Mitte. The streets and sidewalks are narrow by Berlin standards and with the city enjoying Indian summer, people have been sitting at close quarters night after night outside restaurants und cafes as if nothing had changed since the virus arrived.

They've been joined by tourists intent on sampling the city's take-out delights or savoring a sundowner at one of the neighborhood's many hipster hangouts. In the eyes of many residents, the combination of crowds carousing cheek to jowl and a dearth of official checks was bound to end badly.

Berlin has been watching the storm gather for weeks now. But Mitte is not the only trendy neighborhood in town. The streets of other central boroughs like Neukölln, Kreuzberg or Friedrichshain buzzed day and night, too.

Berlin is a risk area

The national health authority, the Robert Koch Institute, publishes a list of COVID-19 hot spots in Germany (rki.de info in English) The RKI listed four Berlin districts in its top ten risk areas on Wednesday (7.10.): Neukölln, Friedrichshain, Mitte, and Tempelhof-Schöneberg. The institute's latest update reads: "The situation in the affected districts of Berlin is a result of diverse factors, including young people, international travelers and party-goers who contract the disease while out partying and then take these infections home with them to their co-residents or families." 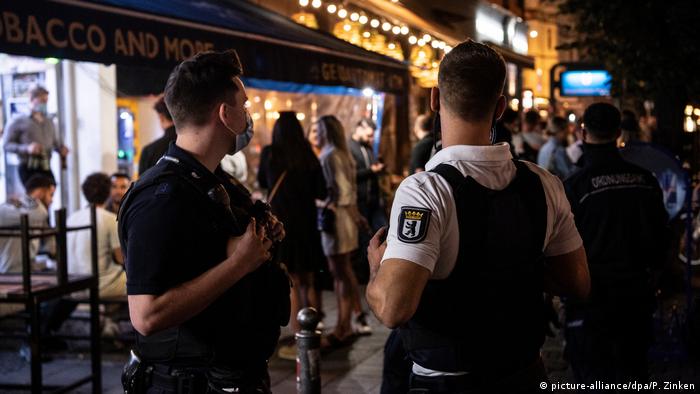 Police in Berlin are now set to get tough on partygoers

In terms of Berlin as a whole, the rate of infection has surpassed the peak of the first wave of the pandemic in March. The national parliament and government have been affected, too. After all, they are also located in Berlin-Mitte.

Local newspapers are increasingly giving voice to popular anger, too. According to the daily Berliner Zeitung, "Incompetent politicians are letting the city go to rack and ruin and making it a national disgrace."

According to official figures, the biggest proportion of infections is in the 20 to 40-year-old age group. There have been numerous reports of large gatherings in Berlin parks, outside take-out shops or in beer gardens. The usual locations, the city's many nightclubs, have all been closed because of the pandemic. There have also been big indoor celebrations. One headline in the yellow press screamed: "No distancing, no masks — dozens of COVID-19 infections at a wedding in Berlin"

Now, the city government has taken action - more decisively and with more determination than most observers expected. In a city famous for its 24-hour bars, official closing time for pubs and restaurants is being imposed from 11 p.m. to 6 a.m. and there will be restrictions on the sale of alcohol.

Outdoors, a maximum of five people, made up of members of two households at the most, will be allowed to gather in one group. Private indoor parties will be restricted to ten people. The measures are scheduled to stay in place until the end of October. Depending on the infection curve, they will then be loosened or tightened accordingly.

Johannes, who runs the restaurant "Schwarzwaldstuben" in Berlin-Mitte says he can just about live with the new rules. He has suffered a large drop in sales because he has had to reduce the number of seats and tables in his restaurant to maintain social distancing. The main thing, he says, is that the regulations are enforced. In his opinion, the lax application of the rules by the authorities was a factor in the decision by many people in his industry to loosen up. That, he says, with unconcealed anger, has led to a new rise in infections.

New regulations are to be rigorously applied and fines for infringements would start at 5,000 ($5500.)