COP26: Biden accuses China and Russia of failing to lead

The US president has said China's leader Xi Jinping made a "big mistake" by not attending the COP26 Glasgow climate change summit. He also blasted Russian President Vladimir Putin for failing to turn up. 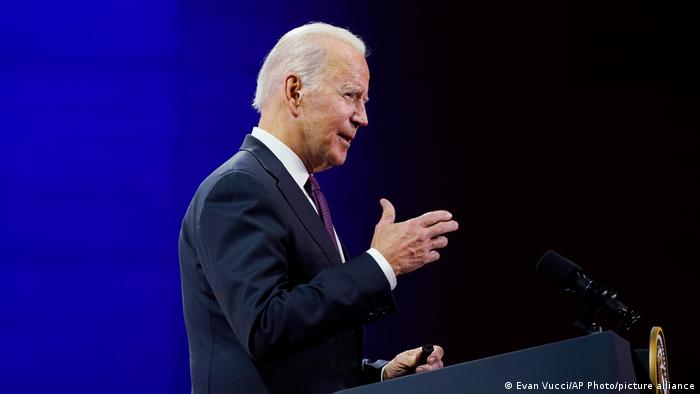 US President Joe Biden launched a broadside at his Chinese and Russian counterparts as he departed the COP26 climate change conference in Glasgow on Tuesday, accusing them of failing to show leadership.

Biden, who has been keen to promote the US as being back at the forefront of efforts to tackle climate change, said Beijing and Moscow had lost influence by not being present.

The US president began by criticizing the decision of China's President Xi Jinping — whose economy is the largest overall emitter — not to attend the summit, at the beginning of the 13-day climate negotiations.

"The fact that China, trying to assert, understandably, a new role in the world as a world leader, not showing up? Come on!" said Biden. "The single most important thing that's gotten the attention of the world is climate. Everywhere. From Iceland to Australia, it just is a gigantic issue. And they've walked away. How do you do that and claim to be able to have any leadership mantle?"

"The same with Putin and Russia," said Biden, turning his focus to Russian President Vladimir Putin.

Scientists urge leaders to save what's left of Arctic

Biden has trumpeted US climate action with promises to have zero carbon emissions by 2050, sharply in contrast to his predecessor and climate skeptic Donald Trump. However, the president still faces tough domestic hurdles in implementing those policies at home.

How were Russia and China represented?

Chinese President Xi Jinping is not known to have left his country since the pandemic began. Instead, he addressed observers and delegates in a written message on Monday.

Xie Zhenhua, a special climate envoy for China, spoke to reporters at the summit, dismissing a reporter's question about whether China, as the world's current biggest carbon emitter, bore any special obligations.

Xie, who played a pivotal role in negotiations that achieved the 2015 Paris climate accord, underscored China's longstanding position that the US — given its historic position as the world's largest polluter — and other developed nations should do more, not China.

"We have wasted already five years," Xie said, referring to the US withdrawal from the Paris climate accord under Trump. "And now we need to work harder and catch up."

No reason has been given for the Russian president not attending in person, although his country is struggling with a dire COVID situation, hitting repeated daily records in case numbers.

In a video address, Putin told the COP26 leaders meeting on Tuesday that Russia's vast swaths of forest would help keep Moscow on track for carbon neutrality by 2060.

Experts have questioned calculations on just how much carbon Russia's forests can absorb, particularly after recent devastating forest fires.

What else happened on Tuesday?

World leaders promised to protect Earth's forests, with summit host the UK saying it had received pledges from leaders representing more than 85% of the globe's forested areas.

They promised to stop and reverse deforestation by 2030. Among them are several countries with huge areas of tree cover. They include Brazil, China, Colombia, Congo, Indonesia, Russia, and the US.

President Biden also launched a plan to reduce emissions of methane, a particularly potent greenhouse gas. The announcement was part of a broader effort with the EU and other countries to bring down overall methane emissions worldwide by 30% by 2030.

In a separate initiative, the US, Britain, France, and Germany said they would provide $8.5 billion (€7.34 billion) in loans and grants over five years to help South Africa phase out coal.

The country generates some 90% of its electricity from coal-fired plants, which are a major source of emissions.

More than 120 world leaders were on their way home after the first two days of COP26. During that time, they were warned about the dangers posed by climate change by UK Prime Minister Boris Johnson, naturalist and television presenter David Attenborough and British monarch Queen Elizabeth II.