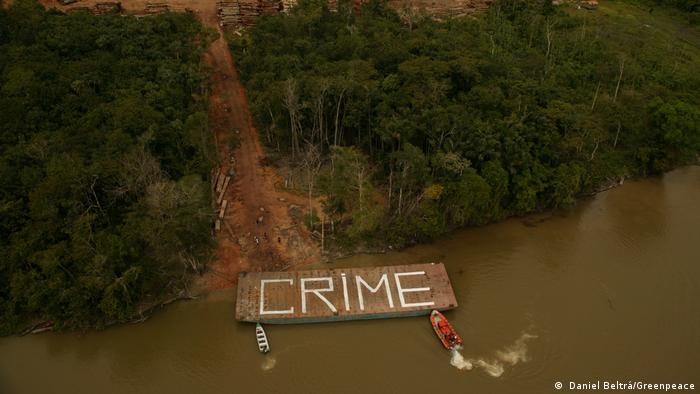 More than 100 countries have pledged to end deforestation by 2030 to combat global heating at the UN climate conference in Glasgow, Scotland. But environmentalists, skeptical of the commitment, say more needs to be done to end the so-called "chainsaw massacre" of the world's forests.

The deal commits 105 signatory states to work to together to halt and reverse forest loss, while "delivering sustainable development and promoting an inclusive rural transformation."

The Forest Stewardship Council (FSC) — which advocates for improved forest management — told DW that it was pleased to see the number of countries involved, covering 85% of the planet's forests. Crucially, the deal includes Brazil, the Democratic Republic of the Congo and Indonesia — home to most of the world's wildlife-rich tropical forests as well as to most of its deforestation. Days later however, Indonesia appeared to err in its commitment.

Video explainer: What is a forest and what is it for?

The agreement is important because deforestation is one of the most significant drivers of climate change after fossil fuel combustion. But with the failures of previous international forest protection agreements firmly in their minds, environmental organizations say the agreement lacks specifics.

"Fundamentally, the world's forests will not be saved by a political declaration," FSC told DW, "unless it is followed up by specific political and financial initiatives to make forest protection and sustainable forest management economically attractive solutions for the people who depend on the forests for their income and livelihood."

But what about the money?

Funding will play a key part in the success of the agreement. It's is currently backed up by €16 billion ($19 billion), one-third of which will come from private sector investors and asset managers, including Aviva, Schroders and AXA.

But groups such as the Coalition of Rainforest Nations, an intergovernmental organization that represents up to 50 forested tropical countries in climate negotiations, say an additional $100 billion a year over the next decade could be required to bolster the agreement.

"Forests, for developing nations, are a resource. And unfortunately, still, trees are worth more dead than alive. Governments are able to issue a concession to cut down trees for timber to sell back to the West or to develop commercial agriculture," the coalition's managing director for media and communications, Mark Grundy, told DW in Glasgow.

That robs the earth of crucial carbon sinks and leads to forms of land use that generate even more emissions, but "brings monies into the government's coffers," said Grundy.

"If we're going to stop that, then financing for the carbon of those forests needs to be of high-enough value to offset that concession."

Why the focus on Indigenous communities?

The countries with the greatest loss of primary forest are Brazil — by a very long way — the Democratic Republic of the Congo, Indonesia and Peru. Some 12 million hectares of tree cover in the tropics was lost in 2020 alone. And a third of that occurred in important humid tropical primary forests, resulting in carbon emissions equivalent to the annual emissions of 570 million cars, according to data from the World Resources Institute, a global research non-profit.

These forests are also home to Indigenous groups – and the agreement has placed a strong emphasis on such communities as "guardians" of the forest.

A recent UN report found that deforestation rates are up to 50% lower in territories occupied by Indigenous groups and stated that one of the best ways to tackle the problem is to recognize their rights.

The International Work Group for Indigenous Affairs (IWGIA), which promotes indigenous rights, told DW that despite accounting for just 6% of the world's population, Indigenous peoples protect nearly a quarter of the global land surface, including areas of significant biodiversity.

"(The agreement) explicitly recognizes the rights of Indigenous peoples, which is significant, especially when you look at the list of signatory governments," Stefan Thorsell, Climate Advisor for the IWGIA, said.

But Thorsell added that the declaration didn't specifically reference territorial or tenure rights for Indigenous communities, as they face being ejected from their land to make way for logging and other activities.

"Without legal recognition of their territories, Indigenous peoples struggle even more in defending their forests and other vital ecosystems," said Thorsell.

Rights safeguarding Survival International, which advocates for the survival of tribal people, voiced concern that conservation efforts can lead to abuses of Indigenous groups.

Fiore Longo, head of Survival's Decolonize Conservation campaign, said forest offset projects enable those in the Global North to continue polluting while Indigenous lands are taken for afforestation offset projects.  Such schemes allow individuals or companies to invest in environment projects to neutralize the emissions they create.

"The same goes for the private sector 'investment,' which we believe will largely be for the purchase of carbon offsets, so will do nothing to reduce emissions or help stop climate change," said Longo. 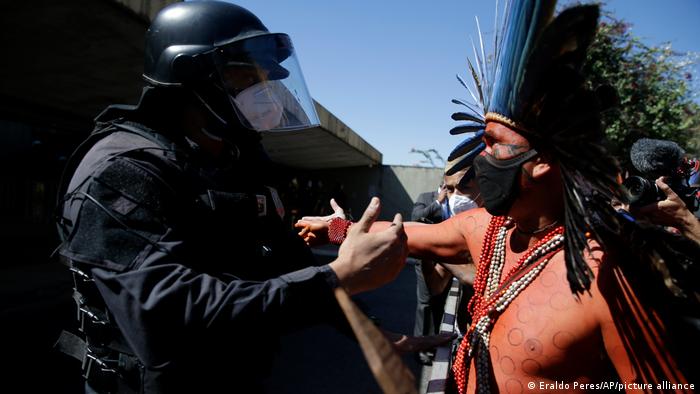 A lot of this will sound familiar, with a very similar agreement being struck in 2014. At that time, 40 countries signed up to the New York Declaration on Forests, which pledged to half deforestation by 2020 and end it by 2030. That was largely unsuccessful, but proponents do hope this time will be different.

According to the World Wildlife Fund, the greater focus on private sector financing in 2021 will help with implementation.

"Many corporations are even more powerful than these developing countries. So we need all hands on deck. We need alignment, we need philanthropies, we need private capital. We need financial institutions to step up," Josefina Brana Varela, WWF's Vice President and Deputy Lead for forests told DW in Glasgow.

Another key difference is the much broader commitment to the deal, with key forest nations such as Brazil signing on this time. The FSC say the number of countries backing the deal is probably it's "strongest point," given that it includes the most important forest countries as well as the developed countries needed to financially support the efforts.

Indonesia already erring on its commitment

Just days after signing the deal, Indonesia appeared to be backtracking on its commitment.

In a tweet on Wednesday, Environment Minister Siti Nurbaya Bakar, who attended COP26, said "forcing Indonesia to (reach) zero deforestation in 2030 is clearly inappropriate and unfair."

She added that "the massive development of President (Joko Widodo's) era must not stop in the name of carbon emissions or in the name of deforestation."

Her position was backed up by Vice Foreign Minister Mahendra Siregar, who declared in a statement: "The declaration issued does not refer at all to the 'end deforestation by 2030.'"

Greenpeace Indonesia said the reversal was disappointing, and revealed the government's true commitment.

"Within a day of President (Joko Widodo's) signing the Glasgow Leaders’ Declaration on Forest and Land Use, this statement, completely at odds with the declaration, has emerged from his minister," Kiki Taufikm, head of Indonesia Forest Campaign, responded on Twitter.

It is "increasingly clear where the Minister for Environment & Forestry's loyalties lie. She should be in the vanguard of ensuring all Indonesian citizens can enjoy their right to an intact & healthy environment as mandated in the Indonesian Constitution," he said.

This story has been updated to include Indonesia criticizing the agreement that it signed .

Indigenous groups have filed a request with the ICC in The Hague for it to investigate Brazilian president Jair Bolsonaro over alleged genocide and crimes against humanity.