Protesters here, police there — one group wants to stop coal mining, the other is trying to stop them. Protests, a ritual in the Rhineland, are getting help from the Fridays for Future movement, as Peter Hille reports. 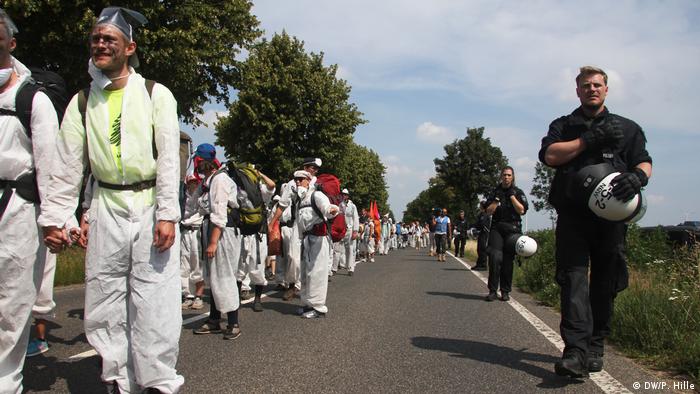 A group of people dressed in white coveralls marches along the L277 state road between Keyenberg and Immerath, deep in the west of Germany — to the left, farmers' fields; to the right, trees; in the middle, a strip of asphalt.

The site could be an idyllic stretch of countryside, were it not for the giant Garzweiler lignite strip mine. Parallel to the road stands a row of excavators that devour the landscape, insatiably chewing up earth to get to the lignite, or brown coal, that lies beneath the surface.

The machines are owned by the energy giant RWE, and are the reason the group of hundreds, perhaps thousands of activists are here. The activists are part of the organization Ende Gelände (End of the Line), which protests for climate protection and against strip mining.

Sina Reisch, sporting round glasses and unruly blonde hair, is one of them, "Today, some of us will commit ourselves to storming the pit and stop the mining," she tells DW. 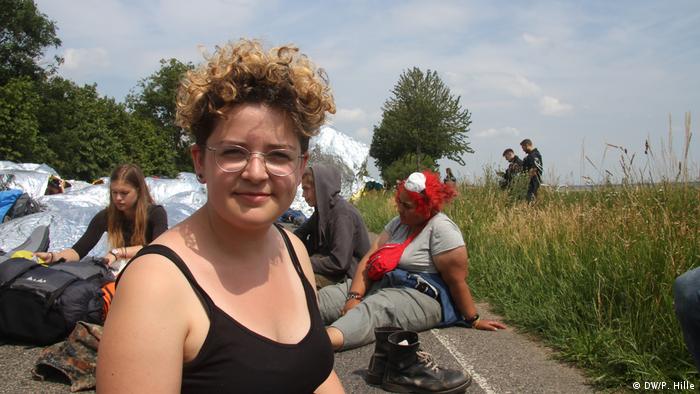 Protesters, like Sina Reisch of Ende Gelände, say of German lignite mining, 'We're going to use our bodies to stop it'

Reisch says the massive amounts of coal stripped from the Rhine district make it Europe's biggest source of environmentally devastating CO2 emissions. She says despite the fact that scientists have long known about the negative effects of climate change, the government still refuses to take action.

"That's why we have decided to take things into our own hands. We are going to use our bodies to stop it," says Reisch.

But the parade of activists is not alone: Hundreds of police are there to keep them from accessing the pit. The mine is the property of RWE, and anyone who enters the area is guilty of trespassing. Police also say that climbing down into the pit could be deadly.

Some 20 police vans creep along in a column behind the activists, a helicopter rattles away as it circles overhead and mounted police are there as well.

With brightly colored protest banners on one side and horses and uniformed police on the other, the scene is strangely reminiscent of a Catholic holy day procession meandering through the countryside in the sunshine.

The activists are almost as well-organized as the police. The red section is here on the L277, and the gold, pink and multicolored sections are trying to access the pit in other areas.

The activists stop every once in a while to pop up umbrellas and gold-silver emergency blankets, in an attempt to create a bit of shade for themselves.

A 20-year-old man, who doesn't want to give his name but traveled hundreds of kilometers to get here, says the activists want to show that they're not going to give up. He has a face mask hanging around his neck — he says one never knows if the police will use tear gas.

He says the Fridays for Future student climate protests — camped out close by and fighting coal mining with music, posters, and bullhorns — are "super cool."

He also says it was great that tens of thousands peacefully protested in nearby Aachen on Friday: "But we really need to actively do something, because the climate damage that is happening now will be irreversible in 15 years. You have to run riot for some causes."

Fighting against the excavators

'It's all for nothing, nothing at all'

Now, only potato fields covered with a blanket of white blossoms and a pale green wheat field separate activists from the edge of the pit and the excavators. It is just a couple hundred meters away; yet, police are standing shoulder to shoulder in front of them.

A scruffy activist wearing a white T-shirt and sunglasses attempts to strike up a conversation with one of the officers. The reply; "Get lost, I don't want to talk to you."

The officer has been out on the road for hours. His reddish-blonde hair glistens in the midday sun. The officer tells DW he is from Essen, about an hour away. He says his deployment at Garzweiler will last four days and four nights, "and it's all for nothing, nothing at all."

The officer — heavy plastic handcuffs on his lapel, a truncheon, pepper spray and pistol on his belt — is one of those Germans who do not want to give up cheap energy produced from lignite.

Cops-and-robbers games between activists and police at coal mines have been going on for years. The most recognizable fight at the moment is that over the nearby Hambach Forest, which has made headlines around the world. 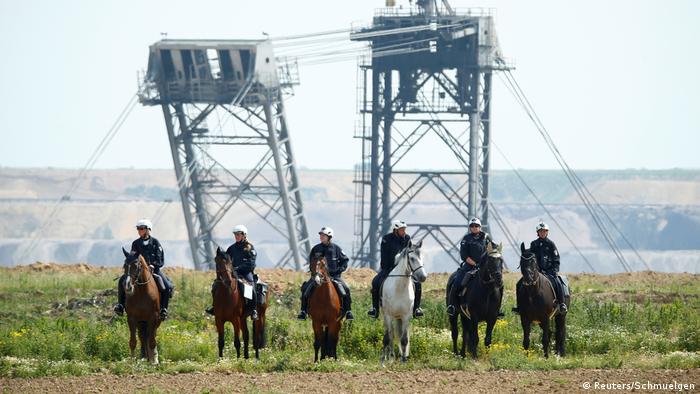 At some point during the day things get so boring that a few officers eventually consent to talking with protesters. A group of activists encircles one of them and attempts to win him over to their cause. He shows interest and promises to read through an online petition against lignite mining.

Then, suddenly, there is a surge of movement. Bands of activists run hand-in-hand toward the pit in their white coveralls. The red group has managed to slip through the police cordon and is making its way through a waist-high wheat field toward the edge.

They chant "onward, onward, end of the line." Red smoke wafts through the air, protest banners flutter in the wind and the helicopter whirs above. According to authorities, several police officers were injured. 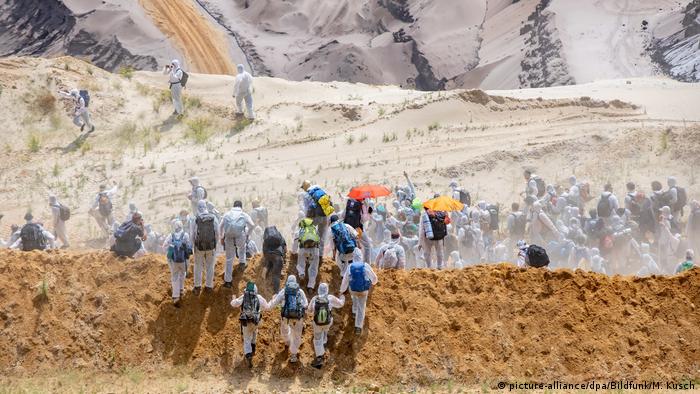 Some 200 members of the red group reach their objective — running, climbing and then sliding down into the pit — as another 700 join them from other groups. The feat is clearly a success in the eyes of the activists, who point out that women still wouldn't have the right to vote had it not been for illegal actions.

RWE, on the other hand, can point to an agreement between the German government, environmentalists and energy companies, allowing the industry to continue mining coal until 2038.

In any case, no matter how one reads this latest episode, it won't be the last "act of civil disobedience" or "trespassing" in the fight over coal in Germany.

The quest by energy companies for extractable lignite coal has driven some residents of the lower Rhine plain from their homes. Despite a recent Supreme Court ruling, many view the development as "too little, too late." (17.12.2013)