Hambach: the battle between a forest and a coal mine threatens Germany′s environmental image | Environment | All topics from climate change to conservation | DW | 30.08.2018

Hambach Forest in western Germany has become a symbol of resistance to coal mining, but its days may well be numbered. Can protesters save Germany's green image as an environmental and climate champion? 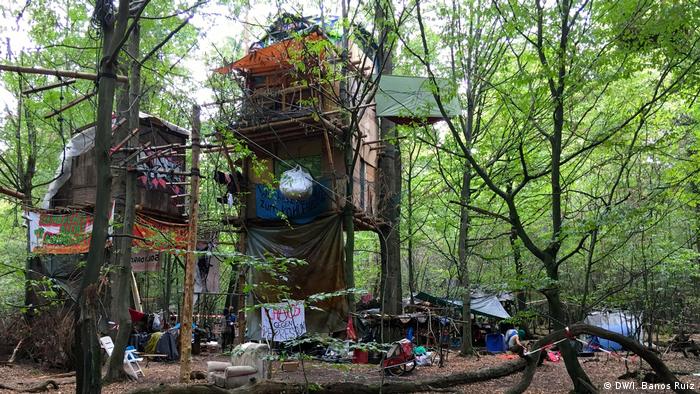 Hambach forest in western Germany looks like an idyllic spot, with a community of some 150 people living in tree houses and walking around barefoot. But appearances are deceptive. These are protesters who have set themselves the tough task of protecting the forest from being sacrificed to a giant opencast mine to extract lignite or brown coal, one of the dirtiest fossil fuels.

The energy company RWE plans to expand the nearby Hambach mine, already Europe’s biggest open pit coal mine. That means chopping down the forest, which has become symbolic of the battle between fossil fuel concerns and environmentalists.

After a long fight, RWE won permission to start clearing from the start of October. That would mean evicting the activists living there - and clashes with the police have already begun. 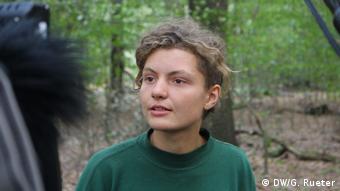 Indigo is ready to protect the forest until the end.

The activists want not only to save the forest, but also to send a message to the world. It's time to phase-out coal mining, says Indigo, after sliding nimbly down a rope  from a tree house. She uses the pseudonym when she talks to the media. Indigo is  convinced we also need to abandon consumerism and show more respect for nature:

"We want to change the system we live in, because we believe that the roots of the environmental problems we have are based on how our society works," she added.

If the forest is destroyed, Germany's green image could suffer badly 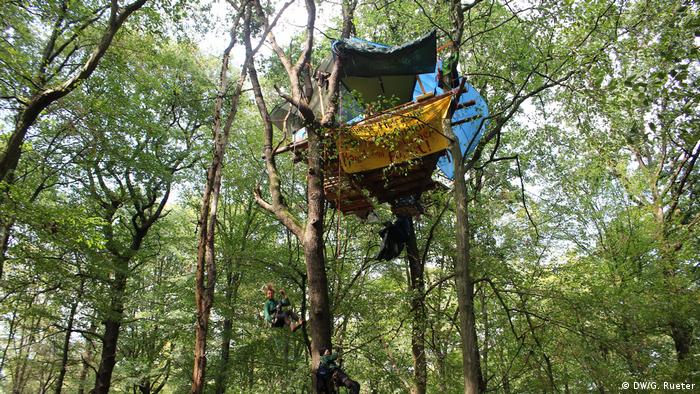 Last stand for the forest

Hambach forest is the last bastion in a long battle against the nearby mine. Neighboring villages such as Manheim, where most houses are empty or have already been destroyed, provide sad evidence of the devastation caused by the mine development. 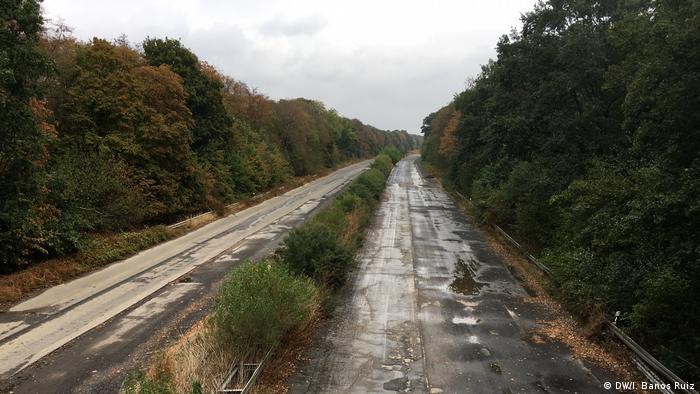 The remaining forest area looks miniscule compared to the vast expanse of the mine. Yet it is of enormous value in ecological terms. Although only around 10 percent of the original forest survives, it is one of the oldest forests in Europe and has an abundant biodiversity that includes endangered species.

Clearing it for coal mining would mean a significant increase in CO2 emissions, incompatible with Germany's plans to halt climate change.

A few months ago, the German government set up a panel of experts — known as the coal commission — to draw up a plan by the end of the year for a withdrawal from burning coal. Five out of the 31 members are firmly opposed to cutting down Hambach forest. Along with church, civic and environmental organizations, they have launched a "lignite moratorium,"  calling for the clearing of the forest and nearby villages to be halted until the commission takes a decision on the coal industry's future. Kai Niebert, president of the environmental organization Deutscher Naturschutzring and a member of the German coal commission, told DW the expansion of the mine would make it almost impossible for Germany to reach its climate target of reducing greenhouse gas emissions by 55 percent by 2030 compared to 1990 levels — and align with the Paris Agreement goals.

But RWE says they have already waited too long and the period of grace has come to an end. RWE has extraction rights for the Hambach mine up to 2040 and plans to make use of them. The company told DW that brown coal power plants were an essential backup in the transition to renewable energy.

Niebert points out, however, that the country already has capacity to produce twice the amount of electricity it needs at peak times and exports large amounts of "dirty" electricity to neighboring countries such as the Netherlands. Therefore the expansion of the Hambach mine would not be necessary to guarantee energy security, he said. 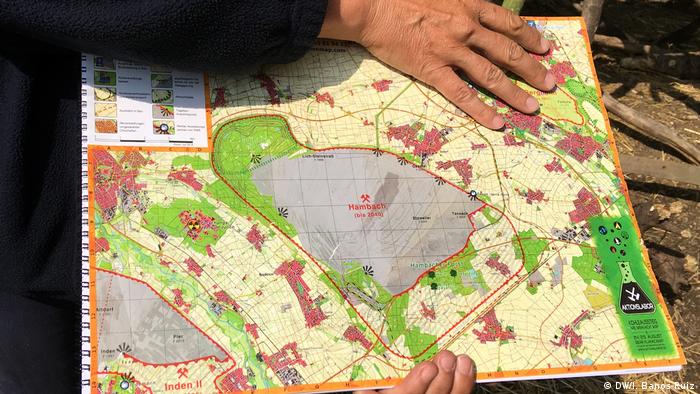 The mine already covers around 85 square kilometers (52 square miles)

Act before is too late

While discussions continue between political leaders and environmental groups, time is running out for the forest. In a few weeks' time, RWE will begin clearing. If the politicians do not react quickly, the situation threats to escalate.

There have already been hostile clashes between activists and police officers. The activists say they are resisting peacefully while the police try to scare them, destroying their tree houses and acting aggressively. 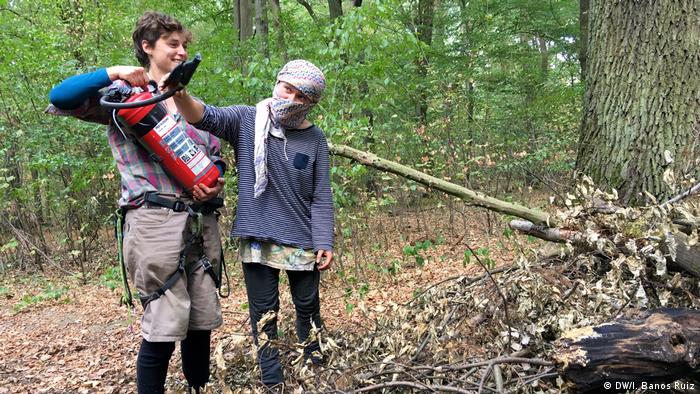 Activists joke about their "dangerous weapons", such as an empty fire extinguisher

"I didn't see anyone reacting violently around here," Indigo said. "What I saw was police acting very aggressively. Four times in the last days we had to climb up the trees and pull all the stuff up because we were afraid of getting arrested."

But the  police have a different view. Dirk Weinspach, the police chief in charge of Hambach forest operations, told DW the activists attacked them with slingshots and fireworks, and injured some of his colleagues. 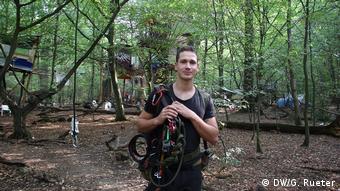 Clumsy has lived in the forest since the protest began

Massive protests are expected if the eviction begins, and there will be a huge police deployment, Weinspach warned.

An activist known as Clumsy, who has been living in the forest for six years, says this is a turning point for German climate policy. He believes it's time to see "whether the state gives in to the lignite hardliners or gets sense and starts protecting our life support basis on this planet."

It is still unclear whether Hambach forest can emerge victorious and intact in the struggle between climate and environment protesters and the fossil fuel giant. However it goes, though, the battle is likely to make its way into the history books.

"We've managed to get the issue of lignite mining and climate change into the public discussion — and that’s quite a big achievement," said Clumsy.

An environmental group has failed in its legal bid to stop the controversial expansion of Germany's biggest lignite mine. Activists say the operation threatens the Hambach forest, home to a number of endangered species. (24.11.2017)

Although Germany has ambitious plans to reduce CO2 emissions over the upcoming decades, a total phase-out of the country's main climate culprit still seems far off. A report from Germany's biggest coal battleground. (03.04.2017)