Tears and tree houses: The occupation in Germany′s Hambach Forest | Environment | All topics from climate change to conservation | DW | 30.11.2017

Tears and tree houses: The occupation in Germany's Hambach Forest

The trees may soon have to give way to a coal mine expansion. But activists are building tree houses and blocking roads. DW spent three days in the ancient forest with them.

Michael Zobel is feeling dejected and has tears in his eyes. Soon he may have to say goodbye to the Hambach forest, which has become a big part of his life. "Perhaps this will be the last time we see the forest in all its beauty," he says.

Zobel is a forest guide and offers tours through the 12,000-year-old forest once a month. But that could soon be over. Energy company RWE wants to begin clearing the forest away completely on Sunday, to make room for the nearby open-pit lignite mine. The clearing is set to begin the very next day.

Zobel is not alone: several hundred people are worried. "The mood is very tense," says Zobel. And around 200 people plan to put up a fight and defend their home.

Activists such as Pello refuse to let the forest disappear. "I have decided to spend the winter here in the forest to protect it," he says. Pello means business; he has even postponed his master's degree for a year. 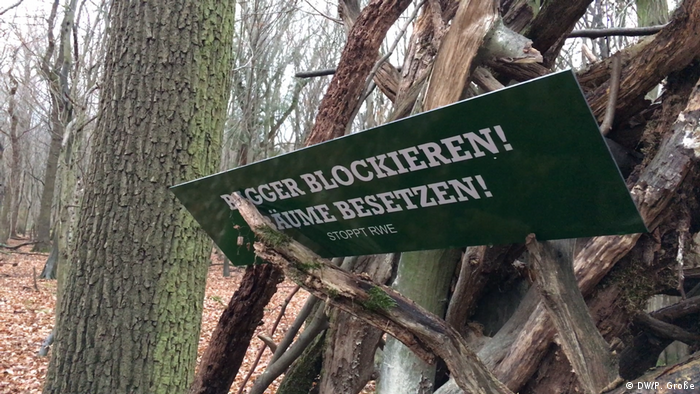 Approximately a hundred people now live permanently in the Hambach Forest near Cologne. They have built tree houses which they hope will help them survive the winter. "Most are insulated and even have an oven installed," explains one activist who has lived in the forest for several years now. There are over 20 tree houses, which are between 16 and 25 meters off the ground. Many are connected by rope ladders to form a kind of tree house village.

"The tree houses should serve as barricades," says Pello. "As long as someone is in it, the tree cannot be felled." It would be up to the police to remove people from the houses. But it won't be an easy task. "We have come to protect the forest and we'll stay up there for as long as we can," says Pello. 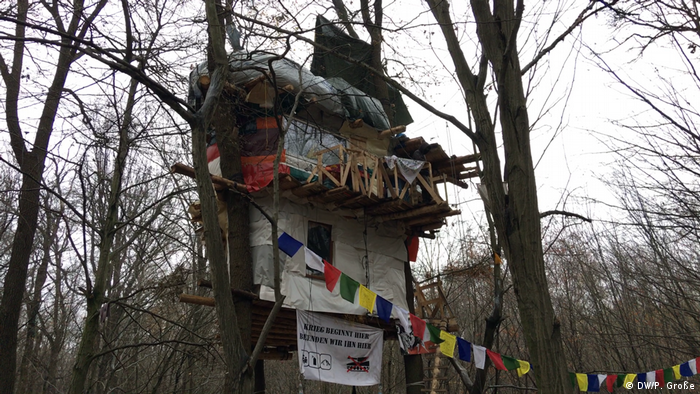 Everyone does as they please

The occupation of Hambach Forest began five years ago with six activists. Now, there are more than 200 people gathered there – from Germany and around the world. "It's a beautiful community life here," says Pello.

You have freedom in the forest, one activist explains: "Anyone can do what they want here, they do not have to do anything." Within the camp there is no hierarchy or leader. And everybody can decide for themselves how they wish to defend the forest. "Most of us want to defend [the trees] peacefully, but there are also a few here who are willing to use force," says a longtime forest dweller.

Day one: Stones and pepperspray

"It was a bit exhausting for me emotionally and I barely slept on Monday," says Zobel. He is particularly anxious because his girlfriend has now joined him in the forest. "It was clear that the clearing would start on Monday, but no one knew exactly what would happen."

The day begins with noise from above. It is still dark when a helicopter hovers over Hambach Forest. A little while later, the police arrive. The officers block the access road to the forest. The first clearing begins on the right side of the road, while on the left side the activists watch. The RWE security personnel and the police stand between them. 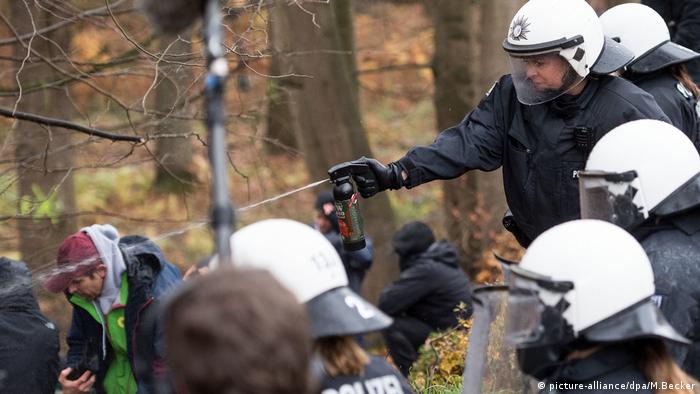 Pello explains her tactics: "We will block the forest roads and try to prevent the machines from getting through. We want to delay the clearing for as long as possible or even prevent it." At the same time, a group of around 50 people are trying to break up the police chain.

As activists walk up the embankment, they are forced back by police with pepper spray. The police accuse them of throwing stones, which they admit to, but only after the police began to use pepper spray.

On Tuesday a group of activists attempt to break up the police again – without any success. "The police are outnumbered, it's a cat-and-mouse game between us and the police," explains one activist.

Some are growing frustrated with the situation. But for RWE, everything is going according to plan: "Thanks to the police presence – without which this work cannot take place unfortunately – there has been no significant disturbances," RWE spokesman Guido Steffen told DW.

According to estimates, RWE managed to clear about two hectares of forest by Tuesday evening. But then comes some surprising news – the environmental organization Bund für Umwelt und Naturschutz Deutschland (BUND) was successful with an emergency application in court to stop the clearing of Hambach Forest. RWE is ordered to halt work by 6pm on Tuesday. They may only resume clearing if the Higher Administrative Court decides in a few week's time if the deforestation is legal. From 'Meadow' to 'Death Trap'...whole villages have been created in Hambach Forest

Only a small win

That evening the police leave Hambach Forest. And the activists, together with their supporters, celebrate their small victory as the forest is saved – at least for now. "Nothing final has been decided yet," says Zobel. However, after many days of stress, the forest guide can now relax a bit: "I have cried a lot lately, so this news is great."

The forest is once again calmer. The activists return to their tree houses. The court decision was also a surprise for RWE. But they are nonetheless confident in their future plans: "The decision is not a [final] decision regarding the matter and we are confident that work will be resumed soon," says Steffen.

Zobel will also return to the forest: "The next tour will be in early December – with more people than ever before." For him, the ongoing struggle in Hambach Forest is only a symptom of many other environmental conflicts worldwide: "It's all about the symbolism, getting out of coal is inevitable and that has now come to the attention of the public all around the world."