Thousands of people have protested to save the last 200 hectares of western Germany's ancient Hambach Forest. The forest is at risk of being felled to allow energy giant RWE to continue its lignite mining operations. 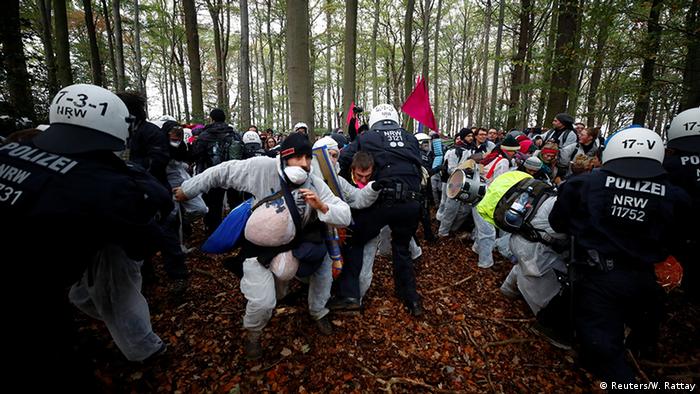 Protesters gathered at Hambach Forest near the western German city of Aachen on Saturday in the hope of saving what is left of the 12,000-year-old forest before it is felled for mining.

DW's environment correspondent Irene Banos Ruiz was at the protest and said thousands of people were demonstrating at the "Ende Gelände" or "End the Site" protest camp.

The main protest broke up into two groups, with one smaller group blocking a train carrying coal from the RWE mine by occupying the track, Ruiz reported.

The police tweeted that the occupation of the train track meant a water cannon had to be used against protesters.

Police said about 250 people had tried to access the open-cut mine and some were being taken into custody.

They also warned people to stay away from the edge of the mine due to landslides, adding that there was a serious risk to people's lives.

German energy giant RWE bought the land Hambach Forest sits on in the 1970s but the company is required to preserve the forest as long as possible and clearing trees is only allowed when it is seen as essential to mining operations.

Protesters have occupied the area for the past six years, with some living in tree house structures. But as RWE prepares to fell the remaining forest, protests at Hambach have escalated.

Police recently cleared 86 tree houses in an operation costing millions of euros, but withdrew from the forest after a court ban on further tree clearances. Activists have since rebuilt some of the tree houses and set up new barricades.

The court ban was put in place following a law suit filed by environmental group BUND, the German branch of Friends of the Earth.

In its lawsuit opposing the forest's clearance, BUND argues that the area falls under the EU's Habitats Directive because of its population of Bechstein's bats.

Hambach Forest is sacred ground. It must be left standing as a monument to our folly — and our ability to shift course and do the right thing, says author and environmental activist Bill McKibben. (11.10.2018)

Officers have ordered 1,000 activists traveling by train to clear Düren station. They are trying to make their way to Hambacher Forest where a massive anti-coal protest is planned for the weekend. (26.10.2018)