A German energy giant's plan to clear ancient woodland, long occupied by environmentalists, so it can mine lignite has been halted temporarily. Meanwhile, a ban on an anti-coal protest near the site has been lifted. The senior administrative court in the western German city of Münster on Friday told energy concern RWE that it must desist from clearing the 12,000-year-old Hambach Forest, pending its verdict on a lawsuit brought by environmental group BUND, the German branch of Friends of the Earth.

An hour later, a second administrative court in Aachen overruled a police ban on an anti-coal rally near the forest due Saturday, ruling in favor of a right-to-assembly appeal brought by another protest organiser, the environmental network Naturfreunde Deutschland [Nature Friends Germany].

The Münster court said documents supporting the BUND lawsuit filled several cartons, making it impossible for it at short notice to decide on legal issues of felling or preserving the 100-hectare (250- acre) forest patch located on RWE property.

RWE had also not adequately proven that clearing the forest was essential for maintaining the energy supply in Germany, the Münster court said in its ruling, which overturned a previous judgement by a lower court in Cologne.

"We cannot presume that we will have a decision in this case within a few weeks," a court spokeswoman said on Friday, adding that proceedings would depend a lot on how the two parties involved acted and whether further evidence had to be gathered.

BUND hailed the court's decision, saying it was "really a turning point here in North Rhine-Westphalia," the state where the forest remnant fringes the giant Hambach open-cast mine that feeds adjacent coal-fired power stations. 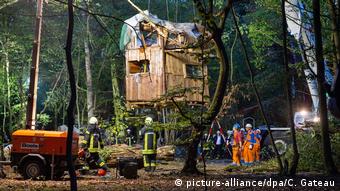 RWE conceded that the ruling could lead to a lengthy delay, saying a definitive court judgment on felling the trees could take until "the end of 2020." The utility warned its shareholders that Friday's interim stop could cost it more than 100 million euros ($115 million) in earnings in its financial year 2019.

Plans by RWE to destroy most of the remaining forest to make way for an extension of its open-cast Hambach lignite mine triggered long-running protests by activists, with some living in the woodlands in treehouses for more than six years to block clearing activities.

In its lawsuit opposing the forest's clearance, BUND has argued that the area falls under the EU's Habitats Directive because of its population of Bechstein's bats.

The Habitats Directive aims to conserve endangered native animals and plants in Europe.

In dismissing the police ban on the environmentalist rally, the Aachen administrative court said Saturday's demonstration "can take place."

It added, however, that North Rhine-Westphalia's conservative-led state government could appeal the protest go-ahead at the higher court in Münster.

The Aachen court said it did not share police concerns about public safety at Saturday's planned rally, saying rules for the arrival and departure of protesters could be resolved through police talking with rally organizers.

The right to peaceful assembly is anchored — albeit with caveats — in Article 8 of Germany's federal constitution or Basic Law.