Police are clashing with activists in Germany's Hambach Forest as energy firm RWE prepares to get at the coal beneath it. Environmentalists say more than just the future of this ancient woodland is at stake.

On Thursday morning, police moved into Germany's ancient Hambach Forest to remove activists and the treehouses they have lived in for the last six years. The forest is one of the oldest left in Europe. But underneath it lies a wealth of lignite, or brown coal — an extremely carbon-heavy fossil fuel.

Police told DW they were acting on the request of local authorities to remove the tree-dwelling activists because of fire-safety concerns. But tensions have been building in the west German forest for months, as energy company RWE prepares to fell the trees in order to expand an open-cast lignite mine.

Over the last week, police have clashed with activists over the removal of the camp's ground-based structures. Now, the conflict has stepped up a notch, as officers dismantle the treehouses. Paul Kemen, a spokesman for police in the western state of North Rhine-Westphalia, told DW on Thursday afternoon that they had begun taking down the first of the 51 treehouses. He could not say how long the clearance would take.

Kemen added that one of his colleagues had been injured that morning by protesters hurling stones. But activists insisted their protest was peaceful. 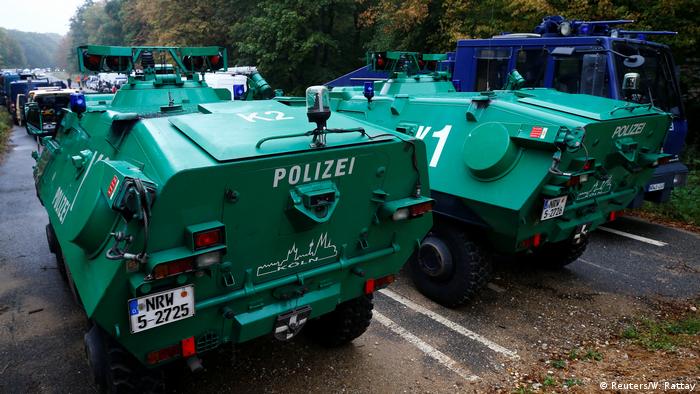 A mother of five, whose name was among a group of "pilgrims" that recently arrived at the forest to support the activists, said it broke her heart to see what was happening.

"These are peaceful people," she told DW with tears in her eyes. "I don't understand why the forest must be felled and why we continue to commit to coal."

Read more: How far is Germany from a complete coal exit?

Activists are calling for nationwide demonstrations on Friday and saying they expect thousands of people to join sit-ins in the forest itself. What's at stake, they say, is much more than a scrap of ancient woodland.

Ronan, an activist protesting the clearance on Thursday, said RWE was just out to maximize its profits. "They don't want to lose investors, so they want to see lignite used long into the future," he told DW.

Karolina Drzewo of anti-coal group Ende Gelände said in a statement it was "a scandal that the state government is protecting company profits and not the environment," while Greenpeace said the state government had made itself an accessory to the energy company's strategy of escalating the conflict in the forest.

For many, the conflict over Hambach Forest is symbolic of the wider struggle for the future of the planet.

"The Hambach Forest — for us a symbol of a future-orientated society — now threatens to become a memorial for the destruction of our future," said Andreas Büttgen of Buirer für Buir, a citizens' initiative by residents of the small town of Buir, which is located close to the Hambach mine.

According to Friends of the Earth Germany (BUND), around 10 percent of the ancient forest is all that's left from logging over recent years. Neighboring villages have also been evicted to make way for the mine.

"We feel abandoned by those responsible in federal and state government — forgotten," Büttgen said. 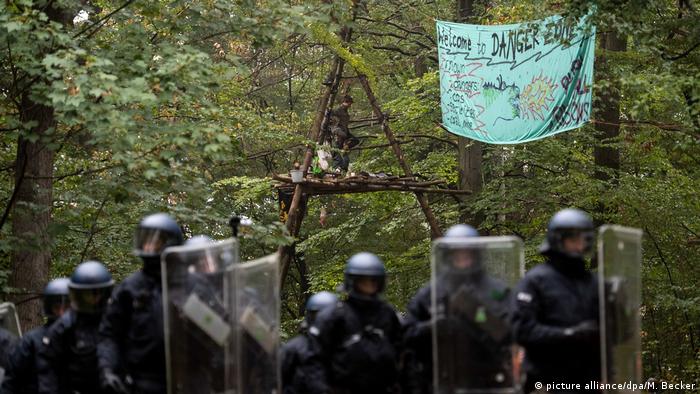 Germany wrestles over future of coal

Germany has made developing its renewable energy capacity a national priority. But the question of when the country will finally say goodbye to coal is the subject of fierce national debate, and has now been handed over to a panel of experts and politicians known as the coal commission.

It is the commission's job to weigh up climate protection against the economic impacts of shutting down the coal sector — and to devise what's being called a "socially acceptable coal exit." Environmental groups and some members of the commission have called for the forest clearance to be put on hold until it decides on a deadline for Germany to give up coal and a plan for the economic future of mining regions. 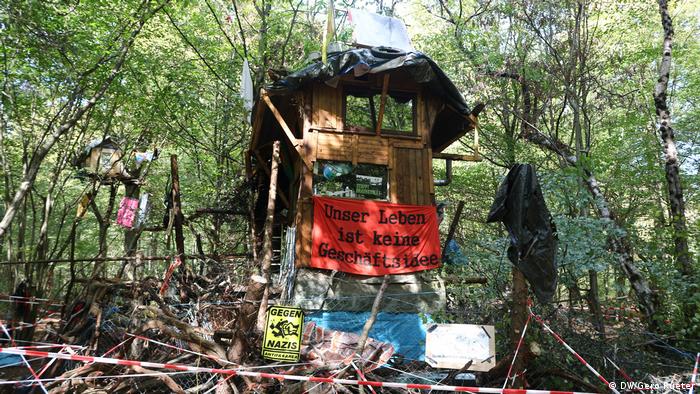 Kai Niebert, head of environmental group Deutscher Naturschutzring, is a member of the commission. He says expanding the mine will make it almost impossible for Germany to reach its domestic climate targets, or live up to its commitments under the 2015 Paris Agreement.

"There's around 1.5 billion tons of carbon under us here in the Hambach area," Niebert said. "If it was burned, we would use up virtually all Germany's carbon budget, and that would be anything but a socially acceptable way to exit coal. It would mean all the other mines in Germany would have to close tomorrow."

But RWE, which has extraction rights for the Hambach mine until 2040, says it has already waited too long to access the coal beneath the ancient forest. Earlier this week, the utility met with activists and offered a possible suspension of the forest clearance until December, but insisted the trees would be felled before the winter season was through.

The utility said that as activists rejected its offer, it planned to proceed in mid-October, arguing that the deforestation was "necessary to maintain open-cast mining operations and coal extraction over the next two years." It added that the coal commission's work didn't justify a suspension of the clearance because its findings "will deal with the medium- and long-term prospects for coal-fired power generation."

On Wednesday, Environment Minister Svenja Schulze told the German parliament: "One side should take its hands off the chainsaw and the other should come down from the trees and open up to a political discussion. We need joint discussion here."

The federal government has not yet intervened. 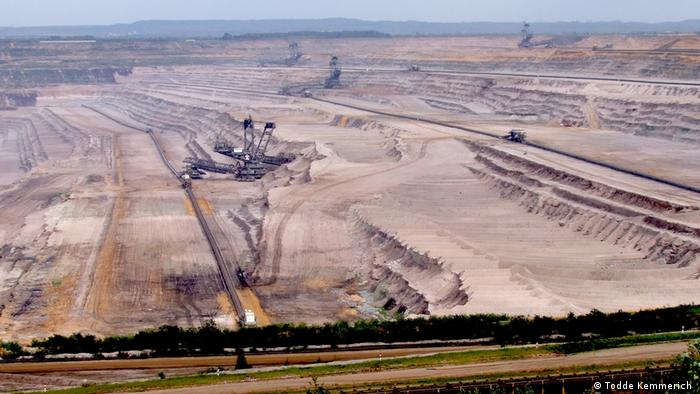 Clive Spash, an ecological economist and chair of public policy at the Vienna University of Economics and Business, believes the Paris Agreement hasn't changed how governments act when it comes to fossil fuel extraction, which is still heavily supported with public money. Rather, Spash told DW, the German government looks to be making the most of its lignite resources while it still can.

"They've hyped up the fact that they're switching to renewables, but they've actually been increasing brown coal extraction because they know that under the Paris Agreement, they will not be able to do this in the future," Spash said. "So they're trying to extract it as fast as possible and burn it as fast as possible."

Ende Gelände, whose name is a wordplay that translates into "end of story," said Thursday that civil disobedience would continue to block the felling of the forest, and that it planned to blockade coal infrastructure at the Hambach mine itself next month.

Spash said such activism was "essential" in the fight against climate change.

"Governments do not act in the right way without pressure," he told DW. "They are acting on behalf of the corporations 99 percent of the time. You can see this very clearly in the actions they're taking supporting the coal corporation and the fossil fuel-extracting industries."

Demonstrations took place in at least five cities, including Berlin and Hamburg. The protests come two days before a government commission intended to map a national path away from coal is to convene for the first time. (24.06.2018)

200 years of coal mining have certainly left their mark on Europe. As Germany prepares for the closure of its last two hard coal mines, an exhibition in Essen takes a look back at the "Age of Coal." (26.04.2018)