Officers have ordered 1,000 activists traveling by train to clear Düren station. They are trying to make their way to Hambacher Forest where a massive anti-coal protest is planned for the weekend. 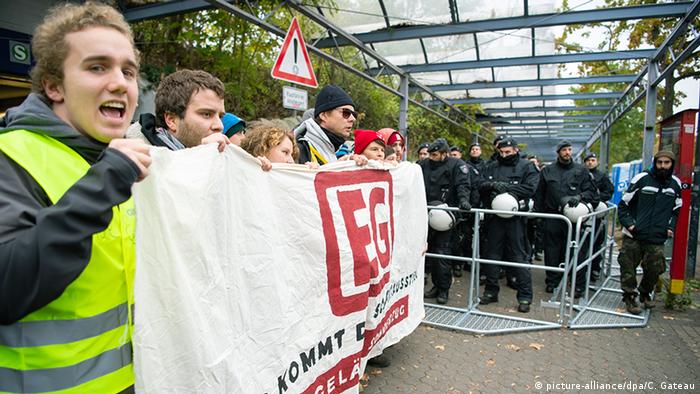 Environmental protestors and police faced off in the western German city of Düren on Friday as about 1,000 activists were on their way to the Hambach Forest for a major demonstration planned for this weekend.

Officers dragged demonstrators away after they refused to clear the station. Train travel was disrupted between the cities of Aachen and Cologne.

Some 5,000 activists are expected to show up at the "Ende Gelände" or "End the Site" protest camp over the weekend.

The train from Prague and Vienna

The specially-commissioned train began its journey in the Czech city of Prague, traveled through the Austrian capital of Vienna and the through several German cities, picking up protestors along the way.

According to police, the activists were asked to get off the train in Düren after it became too difficult to perform security checks in the packed cars.

The protestors filed an injunction against the police controls with a court in Aachen, but that court sided with the police.

Now, they have taken the cased to the Higher Administrative Court in Münster and are still waiting on a reponse. On social media, demonstrators wrote that they were taken to holding cells in Aachen for having stripes of face paint, with police claiming that the makeup made it difficult to identify them.

"Ende Gelände" is the latest iteration of a long-standing protest against the destruction of a large part of the Hambacher Forest, one of Germany's oldest and most biodiverse forests, to make way for a coal mine built by energy giant RWE.

Activists built treehouses in the forest and refused to leave, sometimes for months on end, since the project was announced in 2012.

Police finally received permission to clear the treehouses in September, ramping up rallies against the coal mine. Journalist Steffen Meyn fell through a rudimentary bridge between two treehouses and died.

On October 5, the Higher Administrative Court in the city of Münster ruled that RWE had to stop development of the coal mine immediately, while scientists prepared a report on what the effects the operation of the mine would have on local bat populations.

A final court decision is not expected to come before 2020.

Berlin-based search engine Ecosia has offered to buy Hambach Forest from energy company RWE. The threatened woodland has been the scene of sometimes violent clashes between police and anti-coal activists. (09.10.2018)

Hambach Forest is sacred ground. It must be left standing as a monument to our folly — and our ability to shift course and do the right thing, says author and environmental activist Bill McKibben. (11.10.2018)