Is the destruction of Hambach Forest legal? | Environment | All topics from climate change to conservation | DW | 25.09.2018 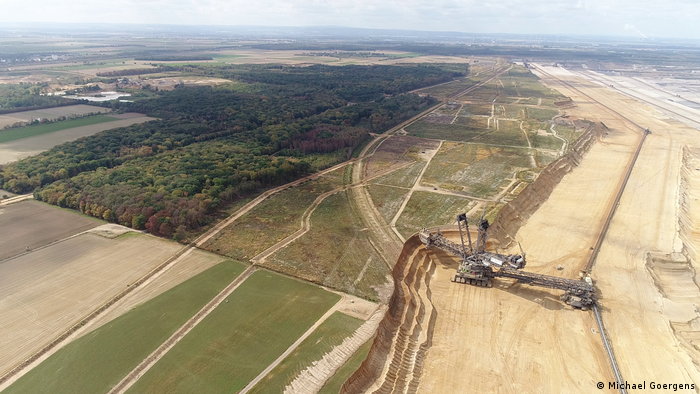 It is there in black and white, in the planning approval for opencast mining in Hambach: Woods and other natural habitats "should be preserved in their ecological capacity for as long as possible," and forest clearance "should be limited to what is necessary to carry out operations."

German energy company RWE plans to start felling Hambach Forest next month. Police have clashed with environmental activists, whom they are attempting to remove from the forest so RWE can bring its diggers in access the seams of coal beneath.

Yet doubts are being raised as to whether RWE really did exhaust all other possibilities at its opencast lignite — or brown coal — mine to fulfill the statutory requirements of preserving the old-growth forest for as long as possible.

On Monday, the "felling the forest isn't necessary" argument was bolstered by a legal opinion from Greenpeace. According to lawyer Cornelia Ziehm, author of a report commissioned by the environmental organization, "there is no existing law that allows RWE to clear Hambach Forest under any circumstances, at any time and to any extent."

So is RWE's planned forest clearance, supported by the regional government in the German state of North Rhine-Westphalia, illegal — rendering the huge police deployment there unnecessary? 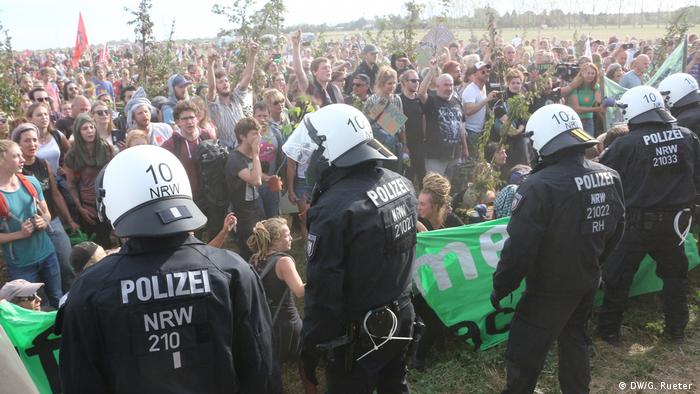 Is RWE moving too fast?

RWE is permitted to clear the forest two years in advance of their planned excavation. Over the last few years, the diggers have been advancing toward the forest at a speed of less than 120 meters (131 yards) per year, meaning that under certain conditions, clearing forest up to 300 meters from the current edge of the pit could be considered lawful.

However, satellite images show that the distance between the pit and the edge of the central section of the wood is between 450 and 600 meters. The closest the remaining Hambach Forest comes to the edge of the pit is around 330 meters at its eastern tip, while the western end is 370 meters away from the mine.

So how can forest clearance reaching a kilometer from the opencast mine be legitimate?

Legality of forest clearing is a question of time

RWE boss Rolf Martin Schmitz says around 100 hectares (247 acres) of woodland in Hambach Forest is to be felled this fall.

DW wanted to know why this clearance plan was necessary for RWE's operations, and therefore legal, and asked for relevant proof. But despite several requests from DW, RWE hadn't supplied the requested information at the time of writing.

According to Ziehm, the legal position is clear: If RWE starts clearing woodland in Hambach Forest in October, as planned, it will be in violation of the law.

The legality of the forest clearance depends on concrete evidence that using land within Hambach Forest "is necessary, or rather essential, regarding the timescale," Ziehm wrote.

She says there is no need to start clearing forest in October 2018 — something even RWE itself has admitted. In a press release, RWE said that forest clearance is only necessary for its operations from 15 December 2018.

Ziehm has therefore suggested that environmental organizations take RWE to court over this timing, should the regional authorities fail to order a ban on forest clearance for October.

Optimizing the lignite mine

Questions over the need for deforestation have also emerged from a technical perspective.

In an analysis of the Hambach opencast pit commissioned by Greenpeace, mining consultancy Plejades said modifications could enable the excavation perimeter to stay in place for longer than stated, so the Hambach Forest could remain untouched for longer.

Claudia Kemfert, energy and environment expert at the German Institute for Economic Research, said the planned forest clearance doesn't make sense from an energy perspective, either.

"Lignite mining isn't needed for energy supply security," Kemfert said. "The firm could manage without the opencast mine in Hambach Forest until next year." What's more, a fast fossil-fuel phase-out, which environmentalists say is essential for Germany to meet its domestic emissions targets and commitments to the Paris Agreement, could make the clearance "totally void."

Kemfert suspects RWE is counting on escalating the issue "to bring about the collapse of the coal commission on the one hand," she said, referring to Germany's task force charged with planning for the country's phase-out of coal, "and on the other to use blackmail to eventually get large compensatory damages."

The coal industry is the biggest employer in some regions of Germany. In the east German city of Zeitz, people fear for their jobs and demand concrete plans for their future once the climate-killing fuel is phased out. (01.06.2018)