Paralyzed by internal divisions and unable to agree on the bloc's direction, EU leaders have failed to agree on tougher climate targets. But can they afford to ignore the growing climate protest movement? 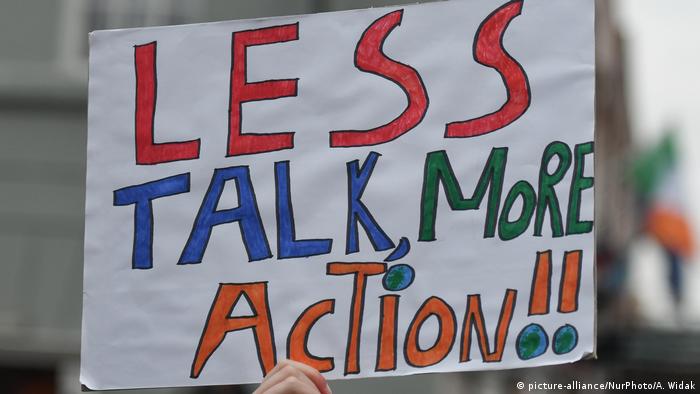 This week's European Council meeting in Brussels was seen as the last chance before the summer break for EU leaders to agree on a stronger pledge to tackle the climate crisis, ahead of a UN summit in September aimed at accelerating the implementation of the 2015 Paris climate agreement.
And yet, despite protests across Europe calling for urgent action and decisive gains for European Green parties in the EU elections in late May , the 28 EU member states failed to achieve unanimity on Thursday. Instead, they pushed a proposed EU-wide target to go carbon neutral by 2050, making it a non-binding footnote in their final statement.

"It's a shame," said Ska Keller, president of the Greens/EFA group in the European Parliament after the summit. "The heads of state and government have ignored the urgency once again, and put all of our futures at risk. Protecting business interests and power still seem to be more important."

Following the decsion, French President Emmanuel Macron said 24 countries including France, Germany and the UK had backed the new target to cut net carbon dioxide emissions to zero by mid-century. But after lengthy talks, they were blocked by Eastern European members including Poland and Hungary, countries heavily reliant on fossil fuels.

Current EU targets, set before the 2015 climate accord, call for a 40% decrease in CO2 and other greenhouse gases by 2030, but climate campaigners have said this target is nowhere near enough to help potentially cap global warming at 1.5 degrees Celsius (2.7 degrees Fahrenheit) by the end of the century, the goalpost set in 2015. And an urgent report released late last year by the Intergovernmental Panel on Climate Change (IPCC) showed this target was already outdated.

In a statement, Greenpeace called the summit's outcome "a black day for climate protection in Europe."

Sebastian Mang, a climate change expert with Greenpeace in Brussels, told DW without immediate action the world is on track to warm by as much as 4 degrees by the end of the century, resulting in "millions and millions of deaths" and "putting humanity's future into question." He pointed out that even the 2030 targets set by the EU were "woefully inadequate."

A September 2018 study by the European Climate Foundation (ECF) found that for the EU to be on the right path to reach net-zero by 2050, carbon emissions would need to be reduced from about 55–65% compared to 1990 levels by 2030. Much of that would come from a shift to renewables such as wind and solar, which would have to increase by at least 80% within the next three decades, according to European Commission figures.

Quentin Genard, acting head of Brussels climate change think tank E3G, told DW that UN Secretary-General Antonio Guterres had been "putting a lot of pressure" on world leaders ahead of the UN summit in September. The EU's 28 members are collectively the third-largest carbon emitter, behind China and the United States.

"This is a crucial moment internationally, and Guterres has insisted that the EU does not come [to the UN] with empty hands," said Genard. "With the US retreating, Europe is needed more than ever."

In late May, Guterres wrote to outgoing European Council President Donald Tusk and said he was "counting on" the EU to "demonstrate leadership" with a target of 55% reduction in emissions by 2030, and to end the approval of new coal-fired power plants by 2020.

"The road to 2050 goes straight through 2030 — you can't go around that," said David Waskow of the World Resources Institute."Strengthening the targets in the EU's 2030 commitments under the Paris agreement is essential to getting on the path to net-zero."

But such a major shift in the EU will require strong leadership — another contentious topic of discussion in Brussels this week. Leaders also ran into a wall on that issue, pushing the decision of who will take the reins of the EU's top jobs for the next five years to another summit on June 30.

For climate leadership, the EU would do well to look northward to member state Finland, which is years ahead of the bloc when it comes to its climate strategy.

Finland, which will take over the EU's rotating six-month presidency in July, has set an ambitious target to become "the world's first fossil-free welfare society and to achieve carbon neutrality by 2035," according to the country's Environment Ministry.

"Climate change is a priority for the Finnish presidency," Liisi Klobut, the ministry's deputy head of unit for international and EU affairs, told DW in an email. "The climate transition will afford the EU a real opportunity to modernize, and at the same time to become a global leader in a green economy."

Klobut said Finland hopes to use its presidency to encourage other member states and the European Union to make "bold decisions and act faster."

EU needs to go 'beyond tinkering at the margins'

Swifter action has been one of the main demands of climate demonstrators. And as EU leaders were meeting in Brussels, tens of thousands of activists from 17 countries and several prominent protest movements — including Fridays for Future —gathered across the border in Aachen, Germany and nearby locations to drive their message home.

What began with 16-year-old Swedish activist Greta Thunberg protesting alone in front of the Swedish parliament in August 2018 has swelled in less than a year to a worldwide crusade, with millions of mostly young people demanding that leaders face up to the truth. But after yet another delay by the EU, is the movement really capable of bringing about change?

Genard of E3G describes the "immense political pressure on leaders" as a "wake-up call," but says nice words are not enough. "I think leaders have realized they need to show more ambition and adopt more stringent policies ... that go beyond tinkering at the margins."

"We need politicians who will take the climate crisis seriously, and who are willing to act accordingly," said Kathrin Henneberger, a spokesperson for the Ende Gelände protest movement, which plans to stage a blockade of the nearby open-pit coal mine in Garzweiler over the weekend to call for an immediate end to coal mining in Germany.

She said leaders needed to act now, and not put off the decision to some undetermined future. "What politicians are doing now, saying that they want to achieve net-zero in the EU by 2050 — that pledge is fit for the trash, not worth the paper it's printed on. It's definitely not enough."

Dorothy Nalubega, a Ugandan climate campaigner in Bonn for a climate change conference, said despite the EU inaction "nothing has delivered quick results" like the mass climate protests in Germany and Europe.

"It was important to me to attend the protests, because climate crisis is a global concern … which needs concerted effort and urgent action," she told DW. "What is done in Germany or any other industrialized country in the global north affects the world, and especially the global south."

"With millions of people demonstrating in the streets, and with scientists saying the window for action is closing, European leaders have understood that they need to talk big on climate," said Sebastian Mang of Greenpeace. "But now they need to act big on climate."

Tens of thousands of people turned out in Berlin for the global protest movement du jour. But as the climate protection demonstrations get more professional, will they lose their soul? DW's Jefferson Chase reports. (15.03.2019)

Council members in the German city have unanimously passed a resolution recognizing climate change as an acute threat. The move was spurred by calls from the local chapter of the Fridays for Future protest movement. (02.05.2019)

Police called in the special forces to deal with climate protesters in the northern German port of Kiel. About 50 people blocked the departure of the vessel, saying that "cruises kill climate." (10.06.2019)