Police say they are close to clearing the last remaining activist tree houses from the Hambach Forest. Energy firm RWE, which wants to raze the woodland to expand its mine, says there's no way the trees will be spared. 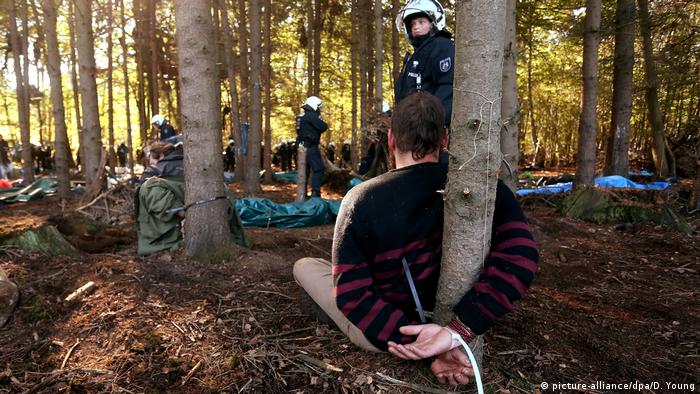 Police said Sunday they had dismantled some 77 tree houses from a patch of ancient woodland in western Germany and were nearing the end of an operation to evict anti-coal protesters.

Environmental activists have been camping out at Hambach Forest near Cologne — some of them for up to six years — in a bid to stop German energy company RWE from clearing trees to make way for the expansion of its open-cut lignite mine.

Police began taking down the tree houses about three weeks ago, initially estimating they were dealing with some 60 structures. A spokesman told German news agency dpa they were close to completing the job, but stressed it might still "take some time" to find and remove less-exposed huts. 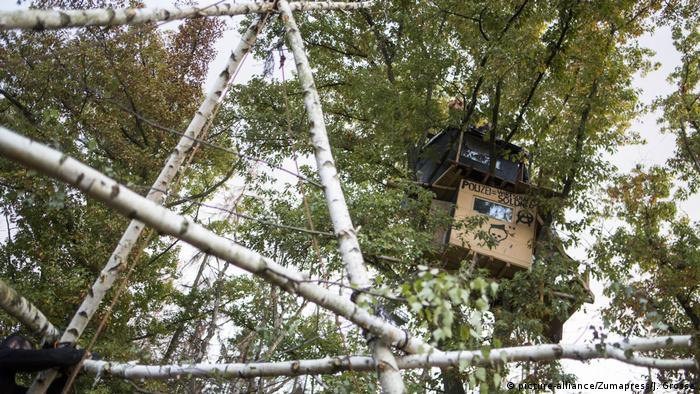 RWE: The forest must go

RWE, which owns the forest, plans to begin felling trees in mid-October. It says expanding the Hambach mine, one of the biggest in the country, is crucial to securing Germany's immediate electricity needs. But environmentalists say preserving the 12,000-year-old forest is important for biodiversity and climate protection.

In comments carried by the Kölner Stadt-Anzeiger newspaper, RWE CEO Rolf Martin Schmitz said there was no room for compromise.

"There's no possibility of leaving the forest standing," he told the paper, adding that allowing part of the woodland to remain untouched is "technically impossible. We need the ground beneath the remaining forest in order to keep the embankments stable."

The Greens have sharply criticized RWE, accusing Schmitz of being "indifferent to the opposition of thousands of citizens," and not caring about "reaching a compromise in the dispute over Hambach Forest."

Schmitz claims the German government has left his company in the lurch by failing to deal with "criminal" protest actions. He says his main responsibility is to the 5,000 employees who depend on the Hambach mine.

Moving away from fossil fuels

Germany continues to remain heavily reliant on coal, partly to offset Chancellor Angela Merkel's decision in 2011 to phase out nuclear power by 2022. Earlier this year, the government tasked a panel of representatives from business, unions and politics with designing a strategy for phasing out coal. The so-called coal commission is expected to submit its recommendations by the end of 2018.

Activists, and some members of the panel, have urged RWE to delay logging in Hambach until the commission agrees on a coal exit deadline and a plan for the economic future of mining regions.

But the premier of North Rhine-Westphalia (NRW), the state where Hambach is located, told the Tageszeitung newspaper that the commission's decision on a deadline "has nothing to do with Hambach."

NRW Premier Armin Laschet also said it had been a mistake to let protesters camp there for as long as they had: "Such an unlawful situation is wrong. It will now be eliminated."

German author and ecologist Peter Wohlleben, who was in the forest on Sunday, called on Premier Laschet and Chancellor Angela Merkel to "send a clear signal for green democracy."

Activists say they plan to hold a major protest on Saturday against the forest clearance.

Clashes broke out earlier this month when police tried to force out activists who have been occupying the forest as part of a protest against coal mining. Activists say there's more at stake than just the Hambach Forest. (24.09.2018)