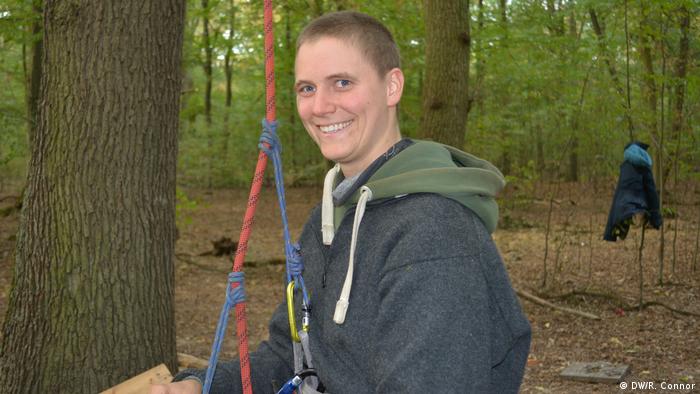 Treehouse dweller Mux has no fear of heights, but does worry about police clearing the site

Mux has lived in treehouse Jelka — named after a female World War II resistance fighter — for "quite a while now." It's her third treehouse.

"I heard about the Hambach Forest a few years ago," Mux told DW. "I got to know more about it and then some of my friends came and stayed here last winter. This year, I learned lots about climbing and other important stuff for the forest, and so I wanted to come and stay here."

Life in the branches - climbing up and down on ropes that are also used to shuttle supplies some 20 meters vertically - looks a little precarious. But that's not a big concern for Mux. She's more afraid of the day that the police arrive, to evict treehouse dwellers from their homes using physical force.

"Life in the treehouse for me is really nice because I really love to live outside. Sometimes you wake up because there's a helicopter. That's quite scary because you know there might be police."

The treehouses in what remains of Hambach Forest, affectionately known as "Hambi," have come to symbolize a resistance to coal mining in the region. The woodland — between the western German cities of Cologne and Aachen — is only 10 percent of the size it once was, with the more ancient trees long ago having fallen victim to Germany's insatiable demand for solid fuel - coal in particular.

The remaining forest is perched at the edge of the Hambach mine, Europe's largest open-cast lignite mine, operated by energy giant RWE.

Activists have lived there for the past six years. As well as wanting to protect the woodland, they're opposed to RWE extracting lignite, or brown coal, which ranks among the less clean forms of fossil fuel. But the days of the treehouse camps could be numbered. Last Thursday, authorities moved in to start removing the structures, ostensibly because they pose a "fire risk" to the already-condemned forest.

The new mining zone would subsume some 100 hectares (247 acres) of land, also including the nearby village of Morschenich.

"The problem is that it's not only destroying the forest and nature here, as well as the place where people in this region live, it's also causing climate change," Mux said.

"There are lots of people dying because of global climate change, which is caused here, so I think I have to use my privileges to stand against that. I have to do it because I can do it."

Jelka is the centerpoint of a "neighborhood" known as "Kleingartenverein" (allotment garden association). It's attached by rope to smaller satellite treehouses. There are numerous other settlements, all organized in their own way.

"This is only a very small occupation, there are lots of others in the forest," said Mux. "They've already destroyed four or five treehouses, but there are around 40 treehouses left, and I think it will take they a long time to destroy all this."

While Mux was concerned that Jelka's time will also come, she was also heartened by the sounds from protesters still gathered outside as evening began to fall.

'A symbol for climate justice'

One of those groups, "Aktion Unterholz", had set off from Cologne several hours earlier. It included people of all ages, although the majority were in their twenties and thirties. They joined hundreds at the officially sanctioned rally point, after being blocked from their original goal - the likely doomed settlement of Morschenich.

Police were keen to keep protesters from getting into the forest, with armored vans and scores of officers deployed in full riot gear around the perimeter.

Emil Freitag, acting as a spokesman for Aktion Unterholz, explained why the protesters felt so strongly. "It's not just about the forest, the forest is a symbol for climate justice and if we stop the eviction and the cutting of the forest, we can also stop the lignite mining in the area. That's what all this is about." 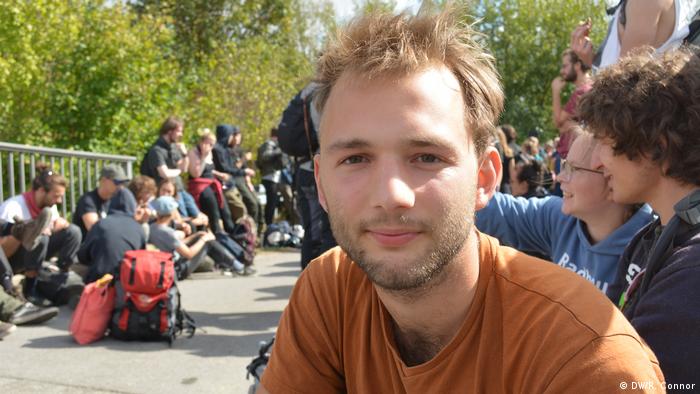 For Emil Freitag and others, the reasons for the protest go beyond the trees in Hambach Forest

"We want Germany to stop coal mining immediately because it's the dirtiest form of power. So the forest is a kind of symbol."

Read more: Hambach: the battle between a forest and a coal mine

Alina Achtziger had traveled all the way from Bamberg, in Bavaria, more than 300 kilometers (about 200 miles) away.

"I heard in the media that the forest was going to be chopped down and that the police were removing the activists from the forest,” she said. It made me so furious."

"Normally I'm not someone who'd go against the go against the police in any sort of way, or put myself forward like this, but I don't think it's right and I think we definitely have to show resistance, take responsibility and support the people. It's not good enough just to show solidarity on the internet. You have to be in the place, to be present."

As the Cologne group neared the official meeting point, there was jubilation. 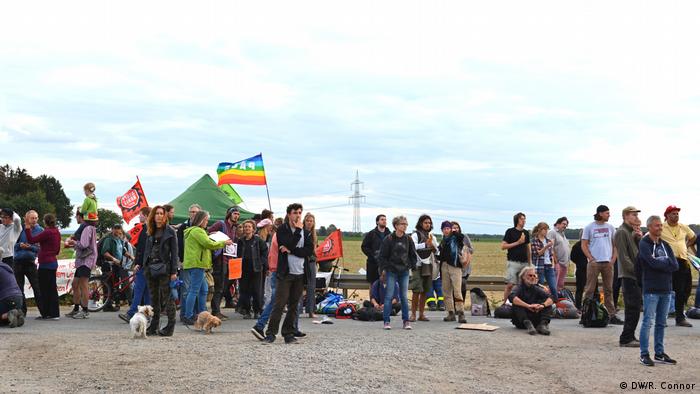 At the official meeting point, the mood switched between relaxation and confrontation

"We're here and we're loud because they want to steal our Hambi!" went one chant. "Saturdays off for the police!," which rhymed in German, another.

At the site itself, the mood switched from relaxed to confrontational. Amid standoffs betweeen police and protesters, there were songs and music.

Read more: The fight for villages and forests in Germany's coal country

The sounds of protest are muffled by the forest by the time they reach the treehouses. But for Mux, they're a sure sign of vindication for what she and her companions are doing.

"There were thousands of people here lately who were marching to the forest to support us," she said. "We know that what is happening here with the police and RWE is wrong, but they're still doing it, against the will of the people."

Dozens of activists have been arrested by police as authorities continue clearing out an ancient forest. An energy company says it needs to cut down the forest to mine coal and meet energy needs in western Germany. (16.09.2018)