Clashes broke out earlier this month when police tried to force out activists who have been occupying the forest as part of a protest against coal mining. Activists say there's more at stake than just the Hambach Forest. 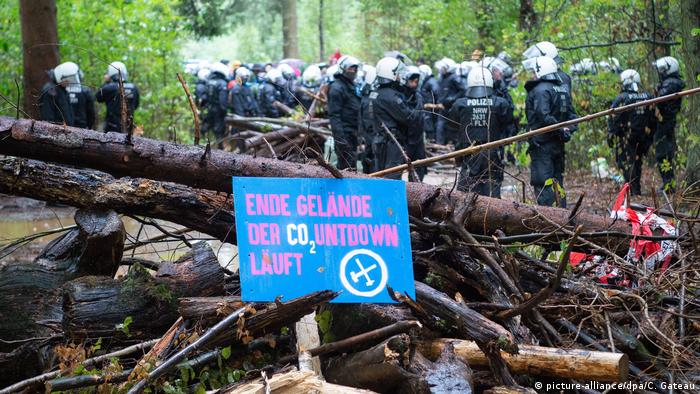 German police on Monday continued evicting environmental demonstrators from the disputed Hambach Forest between the cities of Cologne and Aachen.

Authorities last week began clearing makeshift camps from the site where German energy giant RWE plans to expand its coal mining activities. All actions were suspended last Wednesday, however, after a 27-year-old journalist fell to his death from a rope bridge connecting two trees in the forest.

The Interior Ministry for North Rhine-Westphalia said that activists had put up new barriers over the weekend that needed to be cleared. The state government also urged all protesters holed up in tree houses to evacuate the site immediately.

Authorities maintain that the demonstrators have for several years been illegally occupying the Hambach Forest, which is owned by RWE. The energy giant intends to clear some 100 hectares (247 acres) of woodland to mine for lignite — a brown, low-grade coal considered to be one of the most polluting fossil fuels.

While authorities quietly tolerated the activists' occupation of the Hambach Forest since 2012, protests have come to head in recent weeks after authorities ordered the woods to be cleared immediately, citing fire hazards. RWE has also said it intends to be begin cutting down trees as soon as next month.

The protests over the centuries-old forest have come to symbolize Germany's uneasy transition away from fossil fuels. Protesters have been arguing that Germany should stop extracting fossil fuels and commit to its clean energy goals.