Stillness and shock in Hambach Forest after journalist dies | Environment | All topics from climate change to conservation | DW | 20.09.2018

Hambach Forest is silent with grief. After a video blogger fell to his death, the regional government has suspended evictions of activists protesting a coal mine expansion. Our DW journalist reports from on-site. 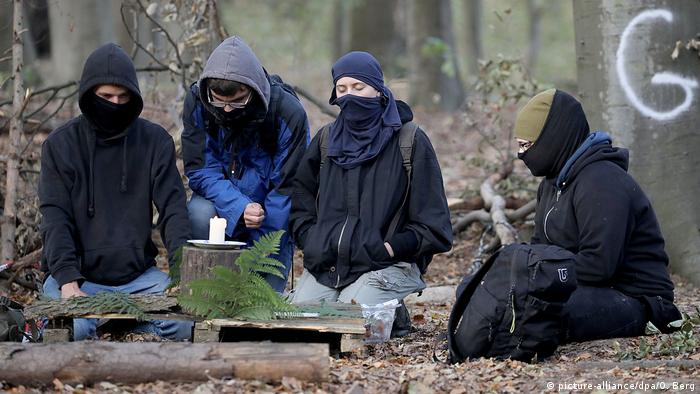 It's quiet in Hambach Forest today. There is no sound besides birds singing and wind whistling through the trees.

Today, there are no workers dismantling tree houses, no yelling activists, no chainsaws cutting down trees to make way for bigger machines.

Today, there is only stillness, sadness and shock.

Despite efforts to revive him, the 27-year-old German citizen died after being flown out by helicopter.

Following the accident, the state of North Rhine-Westphalia's interior minister, Herbert Reul, announced that police activities in the forest would be suspended — for now.

"We cannot just proceed as normal — at least I can't," Reul said at a press conference Wednesday night. Whether the eviction will continue is not yet known. 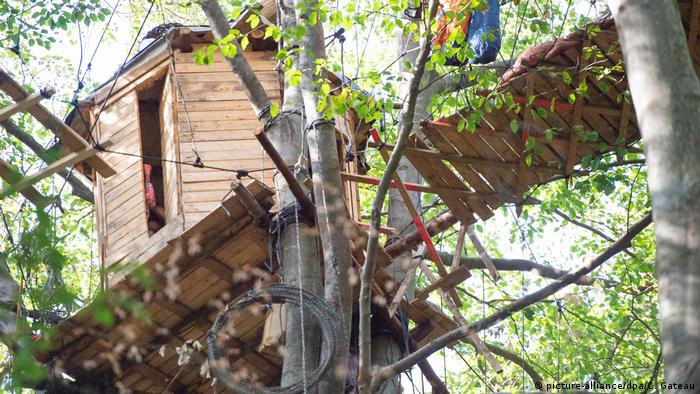 Activists and members of the public have gathered in Beechtown, one of the treehouse villages.

People lay flowers on a makeshift altar, hug each other, sit on the leaf-covered forest floor and converse in whispers. 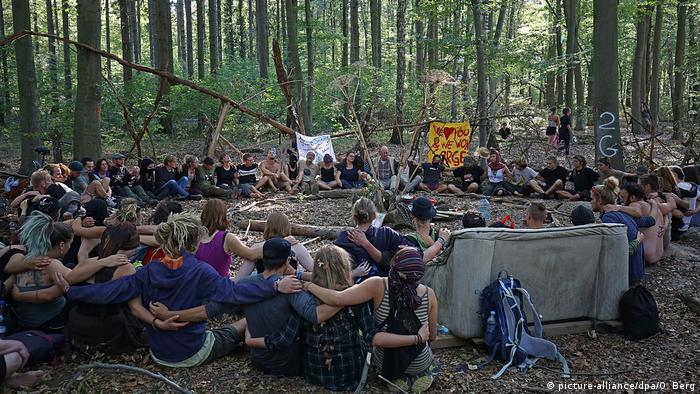 A yellow banner hangs between two trees: "We love you and we won't forget," it reads in red letters, just a few meters from where the journalist died.

Meyn had been present at the protest in the forest for months. He was working on a documentary about the occupation, he told me when I met him last week in Hambach Forest.

A fellow freelance journalist — with no direct assignment, but clearly strongly motivated to document what was happening on the ground. Equipped with a 360-degree camera placed on his bicycle helmet, and a big smile.

To those he met, he came across as a friendly, chatty guy. Indeed, he was a friend to many activists and colleagues.

"He was pure sunshine, you simply had to like him," Antonia Greco, a freelance photographer, told DW. "We got along really well because we were documenting the same thing."

She spent many days and nights with him in the forest, filming and photographing the activists' lives. She also witnessed his fall.

"I'm about to collapse … but I want to be here today," she said as she shared her account. 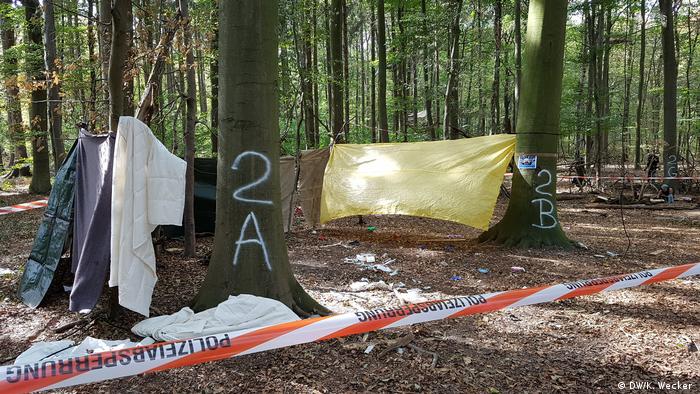 Meyn had been in the forest virtually around the clock when the eviction started.

On Tuesday this week he decided to climb up into the trees, apparently frustrated that media couldn't get closer to where the action was.

"It's become apparent over the past days that it has been difficult for the press to move around in the forest, to get into the forest, or to duly cover the eviction, because the police have cordoned off vast areas around the operation," he said in a video uploaded to his Twitter account on September 18.

"Well, now the press is here up in the trees in Beechtown, in order to cover everything from above and to inform the people about what is happening here. See you soon!"

He published several short videos and photos documenting conversations between police officers and activists, as well as demolition work taking place around 20 meters from where he stood.

A video about workers on a crane was his very last tweet. 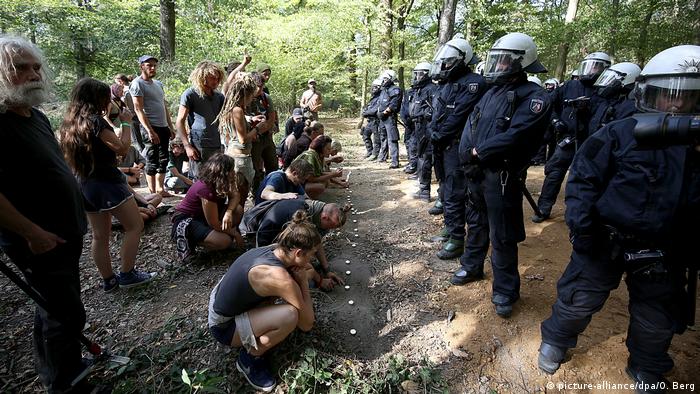 The day also included some confrontation, as police detained a woman with climbing gear when she could not produce identification

Police and activists have slightly different accounts of what happened in the minutes before the tragic accident.

While police maintain that no police activities were taking place near the treehouse where Meyn was standing, activists and eyewitnesses say an officer was on a crane by the next tree, only a few meters away.

Visible from his last tweets is a nearby crane, high in the trees, perhaps 20 meters away.

All accounts agree, however, that it was an accident — a string of unfortunate circumstances.

Aachen police, who are responsible for the region, did not provide comment to DW by the time of publication.

What exactly happened should be clarified in the near future; the public prosecutor has opened an investigation into the incident.

"It's not the time for pointing fingers. It's time for grief," Lutz, one of the activists, told DW with tears in her eyes. 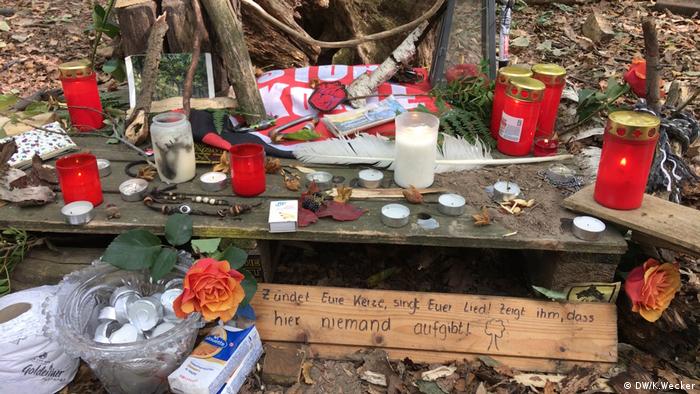 'Light a candle, sing your song! Show him that no one here is giving up!' reads a wooden plaque at the altar

As of Wednesday, the police reported that they had cleared 39 of the 51 treehouses activists built and have been living in for the last six years.

While State Interior Minister Reul suspended the eviction, he also called on the activists to voluntarily vacate their treehouses.

RWE — the energy company whose proposed expansion of an open-cast lignite mine sparked the protest — said in a statement that it regrets the tragic incident, but didn't provide further information on how it plans to proceed.

So far, the activists say they will remain where they are.

Tree-sitters in the area where the journalist fell are still up in the trees, and have only lowered themselves to quickly hug friends in mutual consolation over the tragedy.

They worry about being arrested or prohibited from returning if they leave the forest.

Psychologists and pastors have offered to provide counseling.

Maja Rothe, a spokeswoman for the organization Aktion Unterholz, said it's too early to consider what will happen next.

"We are without words. Today is about mourning — we don't have any concrete plans, it's not the moment for strategic communication or action," Rothe told DW.

Peace, and time to come to terms with what has happened — that's what most of the activists seek at the moment.

"We are not demanding anything. We are thinking about how things can go on here, and if we would like to continue," one of the activists, who didn't want to be named, told DW.

There were also scenes of anger and yelling when police detained a woman in possession of climbing equipment after she was unable to provide identification.

The accident has been tough on everyone involved. So for one day, politics have been set aside.

Although the journalist's name has not been officially announced, DW received confirmation that his family wishes it to be known.

Police have resumed efforts to clear treehouses in Hambach Forest. It comes after thousands on Sunday demonstrated against energy giant RWE's plan to fell more trees to expand its coal mine there. (16.09.2018)

A much-loved patch of German woodland, Hambach Forest, has been occupied by treehouse dwellers for years. As teams move in to remove the structures, anti-coal mining protesters from outside are keen to show solidarity. (16.09.2018)