Thousands of European climate change activists have descended on the heartland of Germany's coal industry. The movement brings together a broad coalition of social justice activists wanting to challenge the status quo. From the outside, the pitched circus tents and colorful figures dashing around look like the fair has arrived at the heart of Germany's brown coal industry.

But on the inside, Climate Camp is a self-described communal utopia bringing together a panoply of social and ecology movements from across Europe seeking climate justice.

Around 6,000 activists have gathered at camps in Germany's coal districts from August 18 - 29. The main camp is based near Erkelenz and used as a headquarters for workshops and experimental grassroots democracy.

The "movement" is composed of autonomous groups, ranging from anarchists and queer activists to environmentalists and pro-immigration groups.

In effect, the activists are a coalition whose overriding mission is to "block coal infrastructure, to call for an immediate phaseout" of lignite mining, said Insa Vries, a student from Berlin and spokesperson for Ende Gelände, one of the more prominent anti-coal groups that engages in civil disobedience.

Read: The battle for villages and forests in Germany's coal country

The plants are fueled by three massive open-pit lignite mines that have engulfed fields, roads and villages in the name of powering Germany's economy.

Together they are the largest source of CO2 emissions in Europe, underlining Germany's continued dependence on coal despite a much touted "energy transition" to reduce greenhouse gas emissions.

"Brown coal mines are not a local problem; they are an international problem," said Eva Weinstein, a protester who rode her bike from London with about 40 other activists. 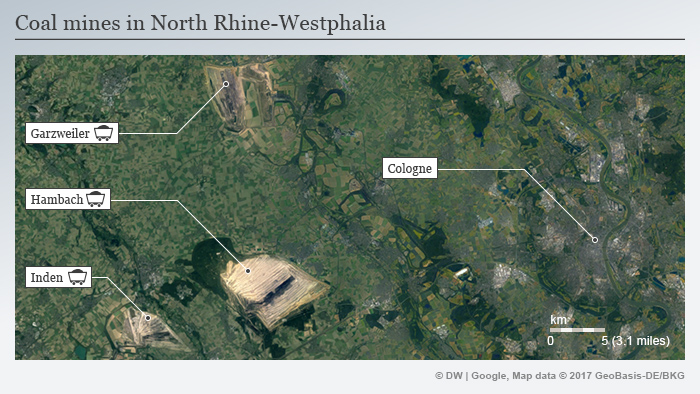 A satellite view shows the extent of lignite mining west of Cologne.

At a satellite climate camp near Bedburg, about 1,600 Ende Gelände protesters on Saturday donned mock hazmat suits as a police helicopter surveyed the crowd overhead.

The day before, they had spent nine hours blocking the rail tracks that carry lignite to the Neurath power plant, which spews 88,000 tons of CO2 into the atmosphere every day. The action was one of several by the group during the week.

Setting off through country roads and farm fields, lines of protesters set out to occupy the tracks again.

As a tactic against police, learned from several years of demonstrations, Ende Gelände is organized into so-called "fingers."

Each finger consists of about 100-300 people who stay together as the larger body of the protest gradually breaks up in a bid to disperse police resources and target coal energy infrastructure.

After a game of cat and mouse with police, around 200 protesters made it up an embankment to block the tracks carrying lignite to the Neurath power plant, shutting it down for six hours.

Hundreds of protesters were forcefully rounded up by police and taken to temporary detention facilities.

The fact that so many young people would risk detention "shows how serious are their concerns about climate change," said Julia Verlinden, a parliamentary observer from the Green Party.

Another smaller group of protesters locked themselves to a conveyor belt in the mine before being taken into custody by police.