Many of the residents in Germany's largest LGBTQI home have fled homophobic violence and discrimination in the former Soviet Union. Why do some inflict violence upon each other, although they're sharing a common fate? 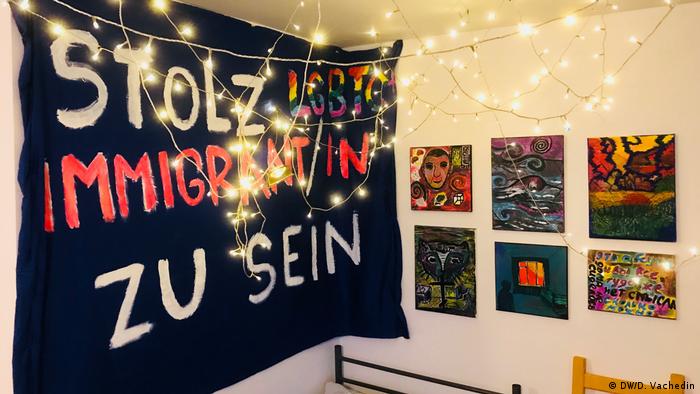 "Proud to be an LGBTQI immigrant": Inside Berlin's home for LGBTQI refugees

Until she was 30 years old, Veronika — her passport still carries a male first name — lived in the southern Ukrainian town of Kherson. She then began to receive hormonal sex change treatment in Mykolaiv, located on the Black Sea coast. In 2017, she set out for Germany. At this point, the requirement to carry a visa was no longer in place. On a whim, she got off the bus in Berlin. She was accommodated in a residential home for LGBTQI refugees, where she's living to this day. At the end of October, Veronika was beaten up by other residents there. As a result, her friends in the refugee home set up an anti-discrimination action group.

Read more: Germany largely tolerant of queer neighbors, but not Muslim ones

The LGBTQI refugee home in Berlin houses 125 people. With the exception of a few private initiatives, the home is the only institution of its kind in Germany. It was established in 2016 in order to protect LGBTQI refugees from violence — including attacks from other migrant groups. According to the home's management, about one-third of the occupants are Russian speakers who have fled homophobia and discrimination at home in countries of the former Soviet Union. In the residential home, this group is the most conflict-prone. 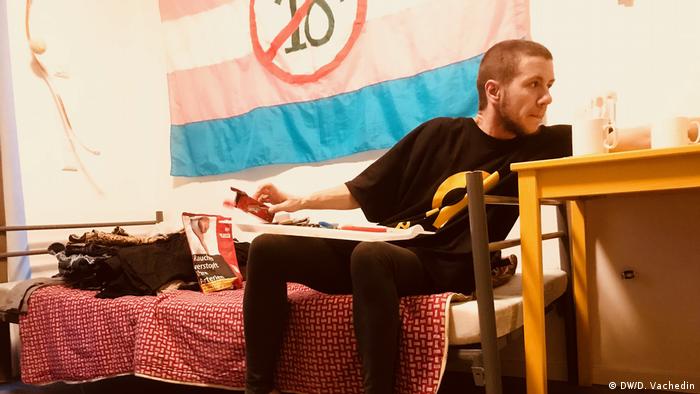 Alik, one of the LGBTQI home's residents, says not enough is being done to help queer refugees cope with the difficult lives they face even where they should be safe

Alik, one of the home's residents, doesn't consider themself a man and generally rejects binary sexual identities. In Alik's view, many of the home's occupants are prejudiced. While transphobia (an aversion to people whose sexual identities are not unambiguous), racism, misogyny and hostility towards handicapped people are prevalent in society as a whole, Alik laments the fact that those prejudices exist even among the home's LGBTQI residents. Their experiences of persecution in their native countries did not always lead to solidarity and compassion among the group — occasionally, they brought about the exact opposite, Alik says, with a few turning from victim to perpetrator in the Berlin home.

Lev, another resident here, remembers the euphoric state of mind he was engulfed in when he left his country for the first time: "You get food. Wow! You get a bed of your own. Wow! But it's then that the status problems begin. And when you experience hostility towards migrants for the first time, you feel helpless," he says.

Authorities often take years to deal with LGBTQI refugee cases. Usually, the initial decision on an application for asylum is negative, which in most cases is appealed by the applicant. Months go by until those affected receive a legal status. If they are rejected, they are deported by police directly from their respective shelters. According to the occupants of the residential home, all of this has a negative effect on people's minds. "Of course we are sensitive. This is a special home for people in need of special protection. I have a thick skin, but Veronika was almost driven to suicide," Alik says.

More efforts toward a solution needed

The residential home's manager, Antje Sanogo, confirmed there were cases of violence in her institution. According to her, however, it was no different from other refugee shelters with respect to status and funding. The problems, she noted, were the same as any other shelter experiences, with a lack of space and privacy resulting in stress and conflicts. "Differing interests clash with one another. You have to share a room with complete strangers," the manager says. This could be solved by refugees leaving residential homes as quickly as possible and getting them accommodated in apartments. "This, however, is complicated as well, because finding vacant apartments in Berlin is very difficult," Sanogo said. The long administrative wait for an answer in refugee cases just adds to the difficulty.

The management's reaction suggests that it regards the beating of Veronika as an internal run-of-the-mill conflict caused by objective factors such as lack of space and difficult living conditions. The anti-discrimination action group established by Veronika's friends, however, believes that Veronika became a victim of transphobia and intolerance. Repression against people who are even more vulnerable than most has become a problem in many refugee shelters, they say, and eventually it must to be addressed somehow. The group has made concrete suggestions for steps that could go a long way toward easing the tensions and helping people gain awareness: "At least once per week, they should organize a non-violent communication class," says Alik.

Stripped of prejudices: this is how the Romanian photographer Tiberiu Capudean hopes that people will see the men featured in his new photo series. "Naked" shows 200 nude gay men, in a quest to tackle homophobia. (04.04.2018)