The Polish premier and the German chancellor have said in Berlin that they want to intensify their bilateral ties. However, "serious differences" on Poland's judicial reforms and the Nord Stream pipeline remain. 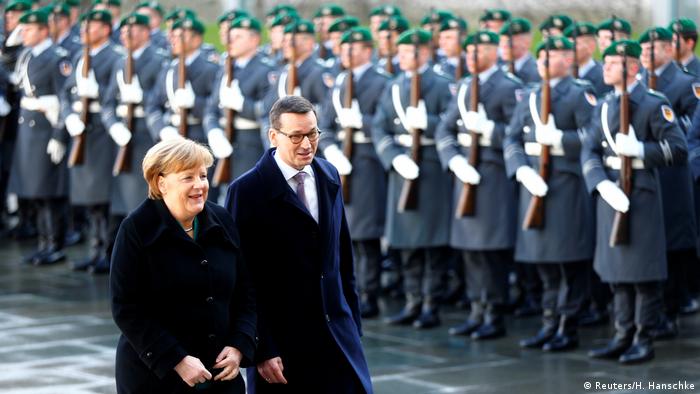 Although the two leaders appeared at ease during their joint press conference and emphasized their cooperation in defense and foreign policy, Merkel noted that there are still "serious differences of opinion" between Berlin and Warsaw.

Where Merkel and Morawiecki stand

What are the sticking points between Germany and Poland?

Defense: Poland has criticized Germany for not sufficiently addressing security concerns in Europe, particularly when it comes to spending. US President Donald Trump demanded that all NATO members spend 2 percent of their gross domestic product on defense. While Poland has achieved this level, Germany is below the target.

Refugee resettlement: The Polish government has refused to take in asylum seekers under an EU-wide quota system, saying that it doesn't have the capacity and shouldn't be forced to resettle them. The EU has sued Poland, Hungary and the Czech Republic over their low refugee intake.

Poland's 'Holocaust law': A diplomatic row between Israel and Poland was sparked after Warsaw passed a law that criminalizes ascribing blame for crimes committed by Nazi Germany to the Polish nation, including use of the term "Polish death camp." Berlin has repeatedly stated that Nazi Germany was responsible for the atrocities committed during World War II.

Judicial and media reforms: A recent raft of judicial reforms has been criticized by Brussels and several European countries, who say they jeopardize the independence of the judiciary. Warsaw insists the measures are needed to combat corruption. Poland faces disciplinary measures from Brussels if it does not scrap the reforms.

WWII reparations: Last summer, politicians in Poland's ruling Law and Justice Party (PiS) accused Germany of shirking its responsibility for World War II and was mulling more reparations. Warsaw has since said that the issue was not pressing, while Berlin maintains the issue has already been settled.

Nord Stream 2: The Polish government also strongly objects to a proposed gas pipeline project that would link Russia to Germany and bypass Poland and Ukraine. Warsaw argues that the pipeline would make Europe more dependent on Moscow.

What happens next: Morawiecki extended an invitation to Merkel for her to attend celebrations for Poland's 100th independence anniversary, which will take place in November.

A Polish perspective on Germany