German military spending fell last year, according to an analysis by the BDI industry association. The report comes amid pressure on NATO members to inject more funds into their armed forces. 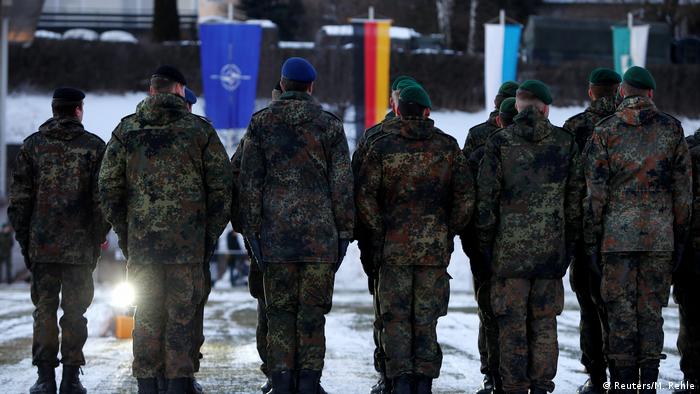 The new data comes amid pressure from NATO and US President Donald Trump for Germany and other members to sharply increase military spending.

However, according to BDI, Germany's federal industry association, this shortfall in defense spending was mainly due to stronger-than-expected economic growth last year, which significantly lowered the percentage.

BDI expert Matthias Wachter said the Germany had "clearly fallen short" of its promise to gradually increase its military expenditures, and that it could drop further if the economy continued to expand.

Angela Merkel's Christian Democrats (CDU) continue to publically back plans for Germany's defense budget to amount to 2 percent of economic output within the near future.

Nevertheless, the preliminary coalition deal struck last week by the chancellor's conservative bloc and the Social Democrats (SPD) appears to do little to appease NATO officials or the US president.

The would-be coalition's blueprint foresees a military budget of €42.4 billion ($52 billion) in 2021, up from €37 billion in 2017. However, according to BDI, given Germany's economic growth projections, that spending level would amount to just 1.15 percent of gross domestic product every year between 2018 and 2021.

Henning Otte, a conservative lawmaker, said that the parties' spending proposal with the SPD was a step in the right direction, but that further efforts were needed.

"We stand by our commitments within NATO and our responsibility for Germany's security," Otte said.

However, several senior figures in the SPD, including Foreign Minister Sigmar Gabriel, have questioned the 2 percent spending target. The party has called instead for increased spending on foreign aid.

On Friday, SPD lawmaker Thomas Hitschler said that the would-be "Grand Coalition" parties needed to have a fundamental debate to determine precisely how much funding for the military is really required. "Unfortunately, the chancellor refused to participate in this debate during the last legislative period," he said.