From Berlin to Washington, Germany's role in the trans-Atlantic alliance has taken center stage. But what does Germany actually do for NATO? DW examines its strategic role amid a spat prompted by US President Trump. 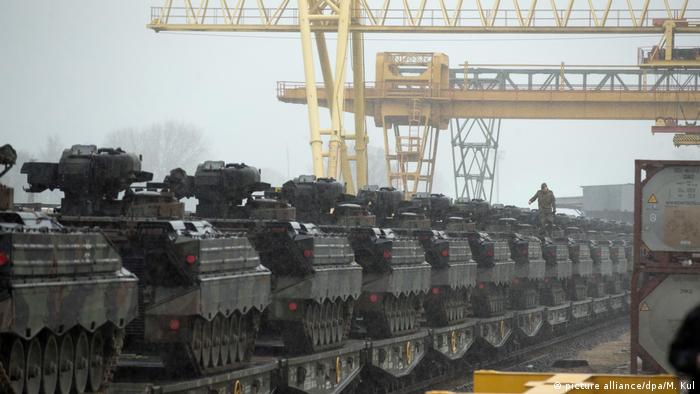 Since West Germany officially joined the trans-Atlantic alliance in 1955 and integrated the former East Germany in 1990 during reunification, Berlin has contributed significantly to the North Atlantic Treaty Organization (NATO).

However, its defense expenditures have come under scrutiny since US President Donald Trump assumed office. In Germany, the question of defense spending is a contentious topic, with differences often falling along party lines.

On the other side, Merkel's coalition partners, the Social Democrats (SPD), have repeatedly questioned the 2-percent target, leading Merkel to complain that Germany cannot be a "reliable alliance partner" if the target that had already been agreed upon would now be called into question.

The divisions stem from US President Donald Trump's ultimatum that NATO member states meet the defense spending target of 2 percent of GDP. If they fail to do so, Washington has threatened to withdraw its full commitment to the alliance.

This created a tense situation across the trans-Atlantic alliance, and seemed to ignore the fact that NATO member states had already agreed in 2014 to meet the target by 2024. The commitment agreed upon in Wales that year stemmed from a pledge member states made in 2006 "to commit a minimum of 2 percent of their GDP to spending on defense."

Tensions flared in the wake of Merkel's visit to Washington last year, with Trump tweeting that "Germany owes vast sums of money to NATO and the United States must be paid more for the powerful, and very expensive, defense it provides to Germany."

The US president once again renewed that claim on Thursday, saying Germany and other NATO members "owe billions" for their defense-spending shortfall. "If you look at NATO, where Germany pays 1 percent and we are paying 4.2 percent of a much bigger GDP — that's not fair," he said.

But German politicians have had to clarify his views on how NATO funding and defense spending work. German Defense Minister Ursula von der Leyen, who supports the 2-percent target, issued a statement last year, saying: "There is no account where debts are registered with NATO."

Responding to Trump's remarks, analysts have pointed out that the alliance doesn't work in that way, and that no cash is in fact owed to the organization for defense purposes or otherwise.

US defense expenditure represents 72 percent of defense spending across the trans-Atlantic alliance, according to NATO.

"This does not mean that the United States covers 72 percent of the costs involved in the operation running of NATO as an organization, including its headquarters in Brussels and its subordinate military commands," NATO said in a description of defense spending across the alliance.

"But it does mean that there is an over-reliance by the alliance as a whole on the United States for the provision of essential capabilities, including for instance, in regard to intelligence, surveillance and reconnaissance; air-to-air refueling; ballistic missile defense; and airborne electronic warfare," it added.

Read more: What would Europe's 'fate' be without the US?

While Washington is the largest contributor to "NATO common-funded budgets and programs," funding 22 percent of them, Berlin comes in second, paying for nearly 15 percent of the civil and military budgets and NATO's security investment program for 2016 and 2017.

Germany boosted defense spending by 5 percent last year, according to NATO, but because economic growth has been strong, spending remains at 1.22 percent of Germany's GDP.

France and the UK, the third and fourth-largest contributors to NATO, trail behind Washington and Berlin, providing 10.6 and 9.8 percent of the cost-sharing budgets and programs, respectively.

But Berlin has offered more than monetary resources to the alliance. "Germany is contributing some 4,700 personnel for ongoing operations for whom the security architecture of NATO, the EU, the United Nations and the Organization for Security and Co-operation in Europe (OSCE) form the frame," according to NATO headquarters.

In February of last year, 450 Bundeswehr soldiers and 30 tanks arrived in Lithuania as part of NATO's "enhanced forward presence" in the Baltic region.

Germany provided the main support ship for NATO's deployment to the Aegean Sea to "conduct reconnaissance, monitoring and surveillance of illegal crossings" in Greek and Turkish territorial waters at the height of the migration crisis.

Berlin has approximately 980 soldiers stationed in Afghanistan for NATO's Resolute Support mission, which aims to "train, advise and assist the Afghan security forces and institutions" after the end of the decade-long International Security Assistance Force (ISAF) mission.

Germany also represents the second-largest contributor to NATO's Kosovo force (KFOR) with 550 troops deployed to maintain a "safe and secure environment in Kosovo."

As such, Berlin continues to make significant contributions to the alliance, including supporting its administrative and operational framework. However, how defense spending is measured and to what extent Berlin contributes to the military budget will remain contentious topics for the country's political parties to tackle.

Defense Minister Ursula von der Leyen has said Germany's army needs a bigger budget if it is to keep up with NATO requirements. Her comments came ahead of a major summit of NATO defense ministers in Brussels. (15.02.2017)

NATO chief: 'We are not in a Cold War'