NATO allies must pay more or US will 'moderate its commitment': Mattis

US Defense Secretary Mattis has told NATO that Washington would consider a "moderate" commitment to the alliance if other members do not pay their full share. Earlier, he called NATO a bedrock of transatlantic relations. 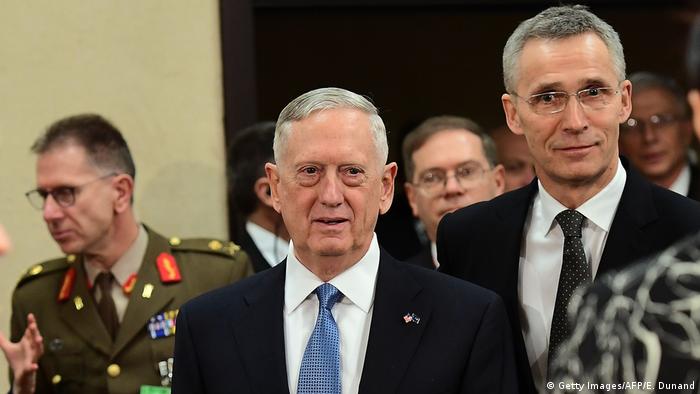 At a closed-door meeting with the 28 defense ministers of NATO members on Wednesday, US Secretary of Defense Jim Mattis said the United States would "moderate its commitment" to the alliance if the members did not increase their defense spending by the end of the year.

Without outlining what - or how much - a "moderate commitment" might entail, in a transcript of a speech made available to reporters, Mattis said NATO must agree on a plan that would see governments increase military spending to 2 percent of GDP.

"No longer can the American taxpayer carry a disproportionate share of the defense of Western values," Mattis said. "If your nations do not want to see America moderate its commitment to this alliance, each of your capitals needs to show support for our common defense."

One of US President Donald Trump's campaign pledges was to hold NATO countries accountable for their defense spending obligations as members of the military alliance. During the presidential campaign, Trump called NATO "obsolete," and he has also suggested the United States might not continue to contribute as much to the alliance if other members did not pitch in more funding.

Before the closed-door meeting, Mattis said NATO "remains a fundamental bedrock for the United States, and for all the transatlantic community, bonded as we are together."

However, he also told his NATO colleagues, "Americans cannot care more for your children's future security than you do."

With the exception of the United States and Britain, only three other nations - Estonia, Poland, and Greece - meet the threshold. German Defense Minister Ursula von der Leyen said Washington was making a fair demand and called on Germany to increase its defense spending.

Britain's Defense Secretary Michael Fallon asked members that are currently spending less than two percent of GDP on defense to "at least demonstrate good faith" by committing to an annual increase.

NATO Secretary General Jens Stoltenberg said making sure members met their obligations was his "top priority," and that, despite an increase in spending in 2016, more needed to be done.

"The most important thing is that we increase defense spending and that is exactly what we are doing," Stoltenberg said on Tuesday, adding the other NATO officials had been looking forward to Mattis's appearance on Wednesday.

Donald Trump has been irritating the US's NATO partners. Germany's defense minister went to Washington to meet with her counterpart, but the US's commitment to the alliance remains unsure, DW's Miodrag Soric writes. (11.02.2017)