Hungary and Poland's prime ministers have said their anti-immigration stances are gaining support within the EU and that they want a stronger say in the bloc's future. Both countries have rejected EU's refugee quotas. 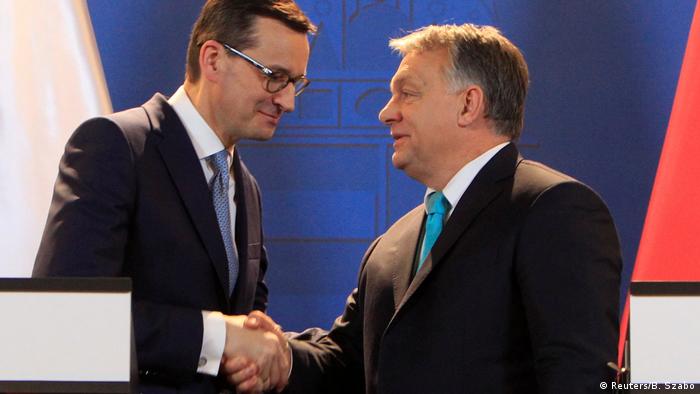 The leaders of Poland and Hungary said on Wednesday that the firmly reject the European Union's efforts to resettle refugees throughout the 28-member bloc.

"It is clear that the European people don't want immigration, while several European leaders are still forcing the failed immigration policy," he added.

Morawiecki told reporters that the EU migrant quotas violated the sovereignty of each member state.

"In terms of migration and quotas that were to be imposed on (EU) member countries we strongly reject such an approach as it infringes on sovereign decisions of member states," Morawiecki said.

The comments came during Morawiecki's first bilateral visit since he assumed office in December.

Read more: The EU migrant relocation and resettlement scheme  what you need to know

Both leaders said they believe their countries' anti-immigration policies gaining support within the EU. Orban specifically pointed to Austria, where the country's conservative and far-right populist parties formed a government last month.

"Democracy has been restored in Austria because the Austrians who reject immigration elected a government which also does not want immigration," Orban said. "This will be the case everywhere in Europe and I believe it is only a matter of time."

Orban and Morawiecki said that their countries should also have a stronger say in the future of the EU as the bloc considers reforms in the new year.

"We want to have a strong say, as these countries [in Central Europe] have a vision about the future of Europe," Orban said.

Hungary and Poland are both under fire from Brussels over their refusal to accept migrants under the EU quota system as well as their conservative governments' efforts to tighten control over the media and their judicial systems.

The European Commission, the EU's executive arm, launched legal action against Warsaw in December over a slew of judicial reforms that Brussels says compromises the independence of the courts.

Orban said in December that Hungary would use its veto power to prevent any sanctions against its long-time ally Poland.