Germany's Angela Merkel has said she wants to establish a joint proposal with France on reforms to the eurozone by next March. The French president has been pushing for a shared eurozone budget and governance structure. 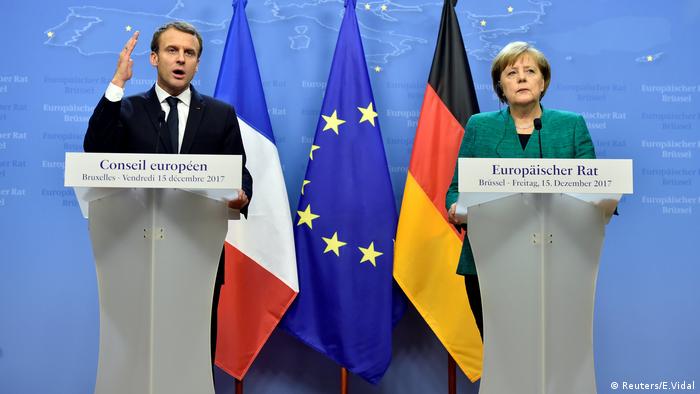 German Chancellor Angela Merkel said on Friday that she wants to find "a common position" with French President Emmanuel Macron, on how to reform the eurozone by next March.

"We will find a common solution, because it is crucial for Europe," Merkel told reports at the end of a two-day EU leaders' summit in Brussels. "The will is there, that's the deciding factor."

Macron said he hoped to make progress with Germany on a reform package for the single currency and that all 19 eurozone members would agree to a "roadmap" by June.

Macron also expressed his optimism that the two nations would find a "convergence" in their plans. "Our aim is to have an agreement in March because at that stage a political step will have been completed in Germany and we will have the capacity to construct together much more clearly on these issues," said the French president.

What is Macron's vision for the eurozone?

The French president plans to shore up the eurozone through:

Berlin has so far been reluctant to subscribe to Macron's plans. The notion of pooling financial resources is viewed by many in the Bundestag as form of "transfer union" among the 19 eurozone states, which would see Germany pay in more than it gets out. The federal government is also reluctant to share risks with their more indebted eurozone partners, such as France, Italy and Greece.

However, Merkel, who herself has expressed reservations over Macron's vision, said she was optimistic that a joint plan would be agreed. When it comes to major European issues, there have always been "struggles between Germany and France, where at the beginning there are differences ... but in the end there is common ground," the chancellor said. "I'm sure that will the case here, too."

French President Emmanuel Macron took Germany's Angela Merkel to the Burgundy town of Beaune as part of her farewell visit. He presented her with France's highest award, the Grand Cross of the Legion of Honor.