Make Austria Great Again — the rapid rise of Sebastian Kurz | Europe | News and current affairs from around the continent | DW | 17.01.2018

Sebastian Kurz took the Austrian election by storm by reshaping Austria's biggest party in his own image. DW looks at his meteoric rise to becoming Europe's youngest government head.

Sebastian Kurz is having a moment. On Thursday he was the star speaker at the EU's most prominent conference of conservatives, and next week he is to be the guest of honor at a lunch held by controversial US Ambassador to Germany Richard Grenell, who has described the 31-year-old chancellor as a "rock star." And just yesterday, he hosted Russian President Vladimir Putin on his first trip to west since winning reelection in March.

But it seems Kurz's power, ambitions and plans to change Austria's image are just as tenacious as his youth.

Kurz rose to prominence in 2013, when at 27 he became the world's youngest serving foreign minister — looking practically pubescent in photo ops with counterparts of the time, including US Secretary of State John Kerry and Iran's Javad Zarif.

But his political career started in school when, just before taking his A Levels, he joined the youth wing of the conservative Austrian People's Party (ÖVP) and became its leader while studying law. With a string of controversial and polarizing local election campaigns in Vienna he helped the conservatives make inroads in a traditionally Social Democratic stronghold. In a show of gratitude, the ÖVP appointed him state secretary for integration in 2011. After a Social Democratic-People's Party coalition was formed four years ago, Kurz became Austria's foreign minister — the youngest top diplomat in Europe. 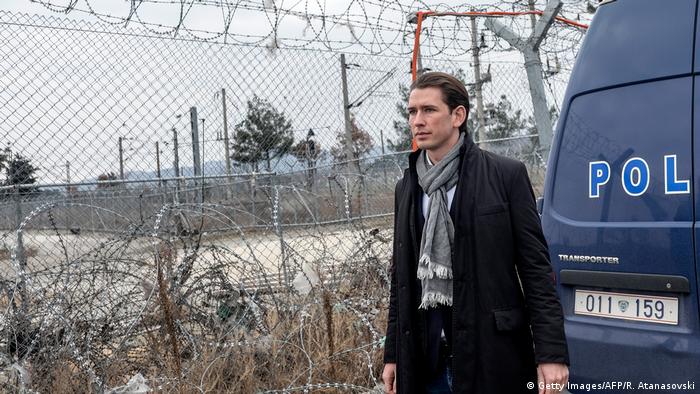 When a new wave of refugees seeking to relocate to Europe became a continent-wide concern in 2015, Kurz recognized Austrian voters' anxiety over unchecked immigration. He called for tougher external border controls, better integration and stringent control of "political Islam" funded from abroad. He also organized the shutdown of the popular overland route through the West Balkans.

The man who would be king

His hard-line positions have prompted observers to call him "hard-hearted," as Gemany's Die Welt newspaper did.

"He is a power-hungry neoliberal," one young voter in Vienna who asked not to be named told DW. "What does he want? The Hapsburg empire back again?"

"He's also cultivated an image as a political outsider, despite having been foreign minister for four years."

'A conservative Macron or Trudeau'

According to professor Peter Filzmaier, a political scientist with Austria's Krems and Graz universities, what Kurz has accomplished is "unprecedented in Austrian politics, but also quite logical."

"The ÖVP is an extremely complex organization, dependent on municipal and regional bodies," said Filzmaier. "He consolidated decision-making functions under the party leader, namely, himself."

Filzmaier also downplayed concerns that Kurz is seeking to become some sort of anti-immigrant nationalist leader in the vein of Hungary's prime minister, Viktor Orban, or the US president, Donald Trump, stressing that the young politician is ardently pro-EU. 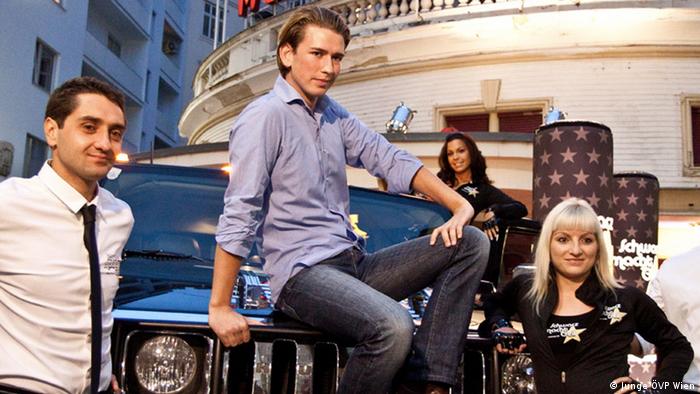 In 2009 Sebastian Kurz used the slogan "Black is hot" for his campaign for the conservatives, whose party color is black

"He sees himself more as a conservative Emmanuel Macron or Justin Trudeau," Filzmaier said ahead of Kurz's election. "He hasn't started his own party like Macron, but he has tried to make his changes in the ÖVP look like a new movement. And it's working. Before he took over the party's leadership in the spring, the ÖVP was lagging in third place at 20 percent in the polls. Now, it's in first place at over 30 percent."

Kurz's ÖVP has spent much of the post-war period ruling in a so-called "grand coalition" with their natural rivals, the Social Democrats (SPÖ). But this election, Austria's two biggest parties both said they would refuse to rule together again. This paved the way for the far-right populist Freedom Party (FPÖ) which performed nearly as well as the SPÖ in October's elections, (26.86 percent for the Social Democrats to the FPÖ's 25.97 percent) to enter into government with the ÖVP, which garnered the most votes at 31.47 percent.

After only a few months in office, Kurz has proven his mettle as an arch-conservative. While he may support Austria remaining in the European Union, he has already marked out a path as an immigration hardliner. Most recently, he said he would actively seek a mandate for the EU's border patrol agency Frontex to expand its work to northern Africa, in order to stop migratns attempting the Mediterranean crossing in the first place.

The government is also planning a slew of tougher immigration measures, including curbs on headscarves for girls, a drastic cut in the integration budget, as well as new measures that would force asylum seekers to had over their phones and large amounts of cash in order to be processed.

At just 31, Sebastian Kurz appears set to become Austria's next chancellor after his People's Party won the most votes in parliamentary elections. The far-right Freedom Party may be key to his government. (15.10.2017)

The conservative Sebastian Kurz has emerged victorious from Austrian elections. As he now looks to forming a government, he should carefully consider the dangers of partnering with the far-right FPÖ, says Bernd Riegert. (16.10.2017)