Andrzej Duda has signed a bill to penalize people who discuss Poland's role during the Holocaust. Some Polish officials have called for the law, which has been pushed despite criticism by Israel and the United States. 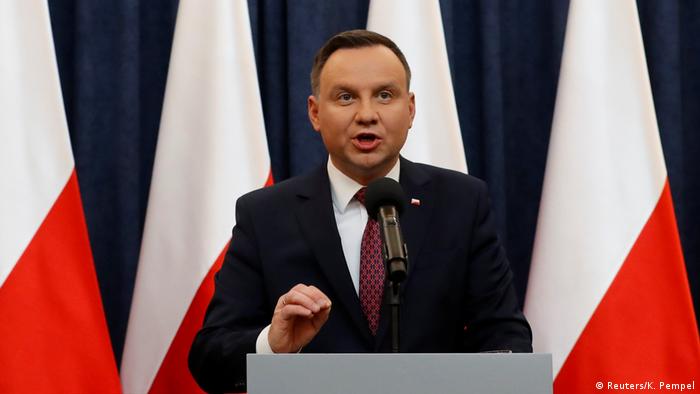 Despite objections from the United States and Israel, on Tuesday Polish President Andrzej Duda signed a controversial Holocaust bill into law. The legislation allows the government to jail anyone who, "publicly and against the facts," suggests that Poles or Poland had any involvement in Nazi war crimes committed during World War II.

Duda said the law would prevent Poles and Poland from wrongly being accused of involvement.

Although Duda acknowledged "cases of huge wickedness" — including incidents in which Jews were reported to Nazis by fellow Poles — he said: "No, there was no systematic way in which Poles took part" in the Holocaust.

Duda said the bill would be reviewed by a top court to assess the possibility of adding amendments in the future. He also said that, during a trip to Israel last year, he had been informed of concerns that the law could block artistic or historical works on the Holocaust.

Polish politicians have long called for laws that prohibit expressions such as "Polish death camps" in reference to concentration camps operated in Nazi-occupied Poland. The law has sparked aggressive disputes within Poland as well as abroad.

Israel has repeatedly expressed outrage, claiming that the law would will stifle discussion of the Holocaust and allow for the whitewashing of crimes such as denunciations and killings of Jews by fellow Poles.

After having his upcoming trip to Warsaw canceled by the Polish government on Monday following his strong criticism of the law, Israel's hard-right education minister, Naftali Bennet, said he was "honored."

Relations between the countries have been greatly strained by the Polish government's decision to push forward with the legislation. Both sides have, nevertheless, said they are committed to continuing dialogue. 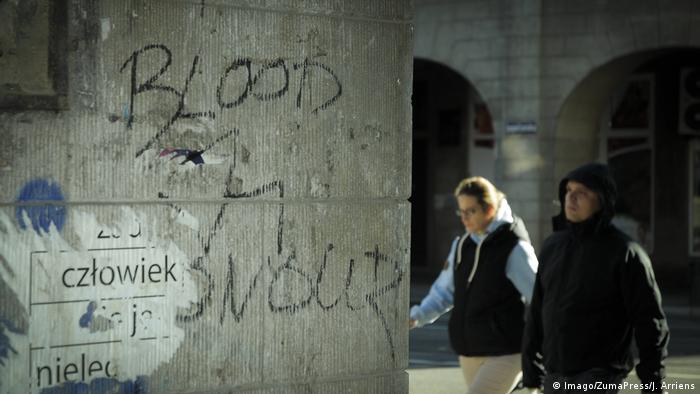 Anti-Semitism is on the rise in Poland, as seen in this graffiti using the Nazi slogan 'blood and honor'

The United States, too, has been highly critical of the law, suggesting that it could jeopardize Poland's strategic relations with Israel and the US.

Jewish groups in the United States have accused the Polish government of "engaging in denial."

Poland has seen a sharp rise in anti-Semitic rhetoric of late. This weekend, Beate Mazurek, a spokesperson for Poland's ruling Law and Justice Party (PiS), quoted a tweet by a Catholic priest exclaiming that criticism of the law by Israel's ambassador to Poland would "make it hard for me to look at Jews with sympathy and kindness."

On Monday, a group of far-right protesters at Poland's presidential palace carried a large banner reading: "Take off your yarmulke. Sign the bill."

The bill was passed by the Polish parliament before being presented to President Duda. It is unclear whether the PiS-controlled Constitutional Tribunal will call for changes.