Israel has accused Poland of "distorting the truth" in a bill about references to Polish complicity in the Holocaust. Warsaw has argued that it is sick of being blamed for German crimes. 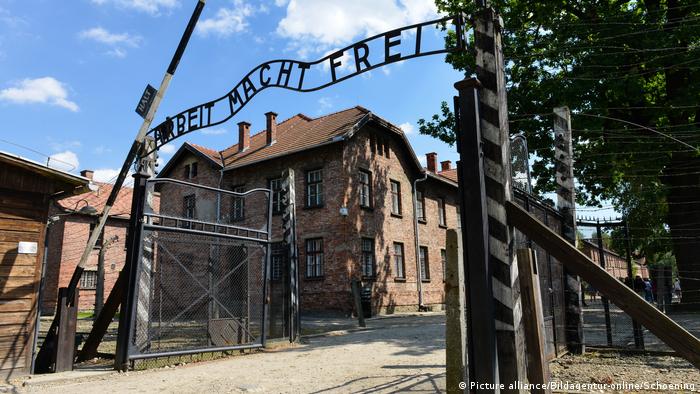 Israel and Poland have agreed to "open a dialogue" to resolve a diplomatic row over the proposed Polish law, the office of Israeli Prime Minister Benjamin Netanyahu said.

The legislation, which passed Poland's lower house on Friday, bans the use of the term "Polish death camp" to refer to concentration camps built by the Nazis on Polish soil. It also places fines or a maximum three-year jail term on certain mentions of Polish complicity in the Holocaust.

Israel summoned Poland's deputy ambassador to express its outrage. Netanyahu said that his country could not tolerate a bill that distances Warsaw from responsibility for the Holocaust, while Polish officials argued the measure had been misinterpreted.

"The two agreed that teams from the two countries would open an immediate dialogue in order to try to reach understandings regarding the legislation," Netanyahu's office said in a statement.

Earlier, Netanyahu told a cabinet meeting that Israel has "no tolerance for the distortion of the truth, the rewriting of history and the denial of the Holocaust."

'Poles being blamed for German crimes'

"We have had enough of Poland and Poles being blamed for German crimes," said Beata Mazurek of the ruling Law and Justice (PiS) party, defending the bill, which still has to pass the Senate and be signed by the president before it becomes law.

The bill hits at Poland's fight for its own legacy. The narrative put forward by Poland's nationalist conservative government posits that Poland was only a victim of Nazi terrorism and acted heroically under horrible circumstances. However, most historians agree that the truth is more complicated, and many Poles collaborated with the occupying forces and committed terrible crimes.

Israel has criticized the bill for its potential to "harm freedom of research, as well as prevent discussion of the historical message and legacy of World War II," and taken issue with the timing, coming the day before International Holocaust Remembrance Day.

The World Jewish Congress on Sunday added its voice to opposition to the plan, saying the draft law's implementation would be a "serious mistake." [It is] "objectionable as it stifles any real confrontation with the most chilling aspect of the country's wartime history — the extent to which local Poles were complicit in the destruction of their Jewish neighbors," chief executive Robert Singer said.

Israel's ambassador to Poland, Anna Azari, told the Polish PAP news agency that the draft law could lead to Holocaust survivors being prosecuted for their testimony should it mention the involvement of Poles in war crimes.

Poland's Foreign Minister Jacek Czaputowicz on Sunday defended the legislation. "I think that crimes in the world are being attributed to Poles that weren't committed by Poles," Czaputowicz told state-run broadcaster TVP Info. "Some formulations could be misunderstood," he said.

On Saturday, Prime Minister Morawiecki wrote on Twitter: "Auschwitz is the most bitter lesson on how evil ideologies can lead to hell on earth. Jews, Poles, and all victims should be guardians of the memory of all who were murdered by German Nazis. Auschwitz-Birkenau is not a Polish name, and Arbeit Macht Frei is not a Polish phrase."

In another tweet, Morawiecki used the following analogy: "A gang of professional thugs enters a two-family house. They kill the first family almost entirely. They kill the parents of the second, torturing the kids. They loot and raze the house. Could one, in good conscience, say that the second family is guilty for the murder of the first?"

Poland's Deputy Ambassador to Israel Piotr Kozlowski rejected the idea that his government was trying to "whitewash" history. "It is to safeguard it, to safeguard the truth about the Holocaust and to prevent its distortion," he said after his meeting at the Israeli Foreign Ministry.

Polish President Andrzej Duda said he would send a top policy advisor to meet with Israeli diplomats on Monday and discuss the bill's wording.

The Auschwitz Museum plans to tour Europe and North America with a unique exhibition of items from the former Nazi death camp. More than one million people died at Auschwitz during the Holocaust. (27.07.2017)