Part of the Mesoamerican Reef has just come off the list of endangered UNESCO heritage. In Mexico, mass tourism is to fund a first-of-its-kind insurance plan to restore its reefs after hurricanes. But challenges remain. 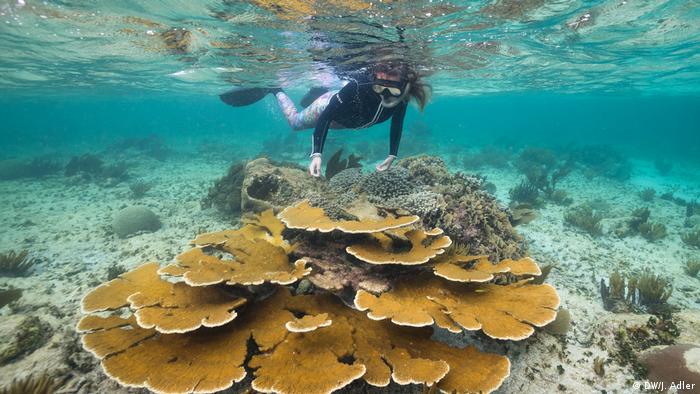 "Welcome to my office," shouts guide Herlan to his crew of tourists before diving into the crystal clear waters off Mexico's Caribbean coast.

This 35-mile (60-kilometer) stretch of the Mesoamerican Barrier Reef System is among the attractions drawing millions to the booming Riviera Maya tourism hub in Mexico's Yucatán Peninsula, generating around $10 billion (€8 billion) annually and contributing nearly 8 percent of Mexico's GDP.

Mass tourism to towns Cancún and Playa del Carmen in the Mexican state of Quintana Roo, though making money, has also degraded the region's reef.

The 600-mile Mesoamerican Reef stretches down to Honduras, and is the second-largest in the world after the Great Barrier Reef off Australia.

The United Nations World Heritage Committee recently removed the Belize Barrier Reef Reserve System from the list of world heritage sites in danger, after determining that Mexico's southern neighbor had effectively safeguarded its section of the reef by checking oil extraction and unsustainable development.

And despite the impacts of tourism on the Mexican portion of the Great Mayan Reef, this is not the only threat.

"Some of the biggest challenges to the reef are pollution, global warming and overfishing — another major reason for its decline is hurricanes," Fernando Secaira, global coastal risk and resilience lead in Mexico for United States-based environmental group The Nature Conservancy (TNC), told DW. 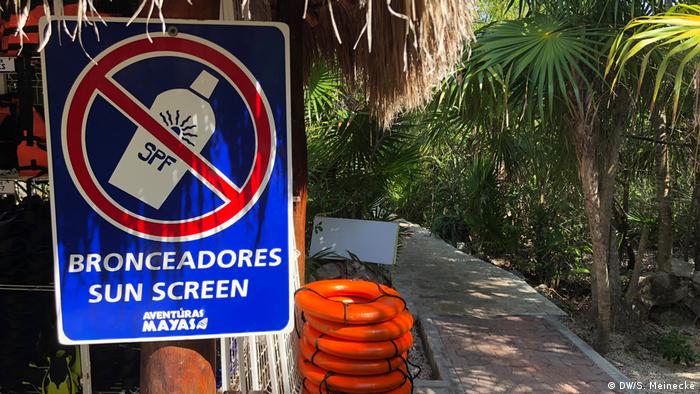 Hurricanes rank as the biggest short-term threat, with a category 4 or 5 storm capable of wiping out up to 60 percent of live coral cover. And recent research suggests such storms could become more destructive in the near future.

"Climate change is also dramatically increasing the frequency of severe storms in the Caribbean. In the last 15 years, we've seen several hurricanes and strong storms damage coastlines and properties in the area," said Secaira.

A healthy reef, however, can reduce a wave's energy by up to 97 percent before it hits the shore, meaning less damage to the coast, TNC believes.

Such findings prompted TNC to collaborate with the government of Quintana Roo, reinsurance firm Swiss Re, reef engineers and oceanographers to develop the Coastal Zone Management Trust Fund, which aims to guarantee that coral ecosystems are restored after extreme storms hit the reef.

"By insuring a barrier reef, we can dramatically reduce risk to coastal communities and beach erosion," Secaira said.

Unlike conventional insurance policies that might be taken out for a car or the contents of our homes, a payout from the fund is automatically triggered when a hurricane makes landfall, rather than according to an assessment of the damage it inflicts, explained Mark Way, TNC's director for global coastal risk and resilience.

Read more: Natural disasters cause record costs for insurers in 2017

Both the Mexican government and the local tourism sector will pay into the fund. Only the reef itself is covered by the policy, not private property, Way continued. Although there have been focused reef-restoration efforts in the past, this is the first attempt to plan concerted efforts all along the Yucatán coast. 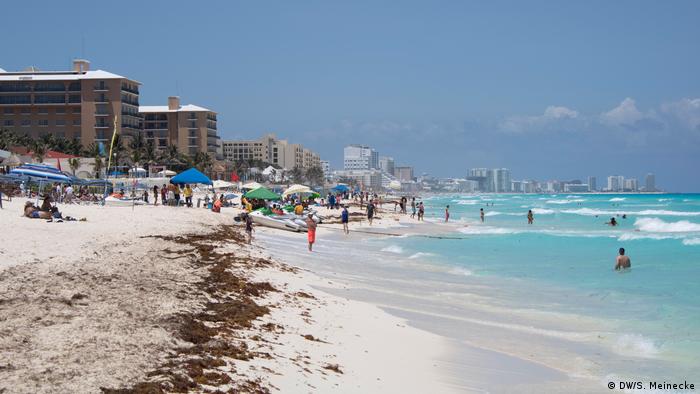 Secaira said that due to public concerns over corruption, the fund will not be managed by the Mexican government.

"Having a trust fund that's managed by a bank and overseen by an advisory committee consisting of local community members ensures that the money is put to good use," he said.

TNC itself has come under fire in the past. As one of the world's wealthiest environmental groups and operating in more than 70 countries, the charitable group has been criticized for engaging with fossil fuel companies and reselling land for profit.

To address concerns over transparency and accountability, Swiss Re and other reinsurance companies have shifted to the framework of Environmental, Social and Government benchmarks (ESG) to invest responsibly and reduce long-term risks. 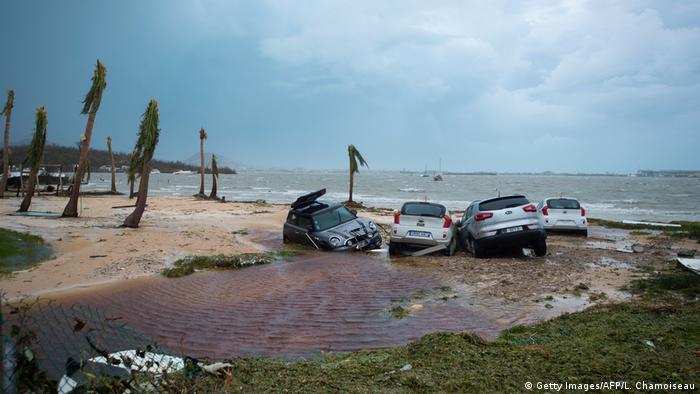 Ernst Rauch, chief climatologist and geoscientist for reinsurance company Munich Re, says ESG protocols are critical in the industry for socially and environmentally conscious investments.

"Innovative insurance solutions are needed as the insurance industry deals with climate change," he said. "They're more in line with the environment, and are better than quick-fix solutions," Rauch added.

He told DW the biggest challenge is convincing local governments, communities and private companies to engage in nature-based insurance schemes.

Some of those longer-term efforts include training locals and experts to repair a reef once a hurricane does hit.

"We've developed a post-storm protocol to train local fishermen, tour operators, tour guides, reef managers as well as a few scientists so everyone knows what to do when a hurricane hits," Secaira said.

Calina Zepeda, coordinator for TNC's reef restoration course in Mexico, told DW that she has been preparing locals for weeks on how to properly assess coral damage and learn about coral reattachment efforts using specially mixed cement.

"Training locals on how to safely restore corals is our number-one concern. We need to make sure they can handle themselves underwater and be aware of coral so that no accidents occur," Zepeda said. 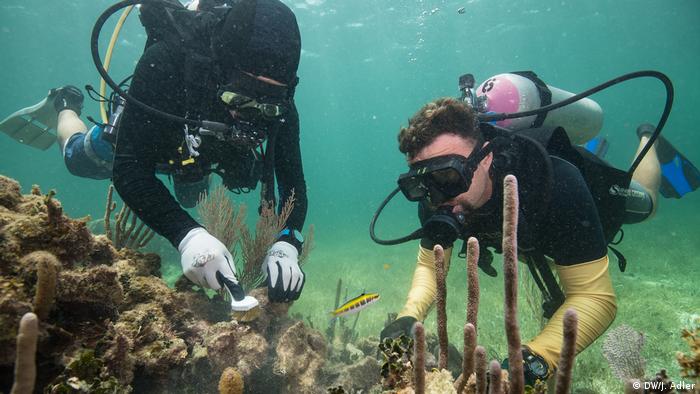 Underwater safety is a priority for any reef workers, TNC said

But hiring trained locals has been a challenge in the past, said Eduardo Nájera-Hillman, a marine biologist and director of nongovernmental organization WildCoast.

A former park ranger for the Mexican government, he was involved in training park rangers on past reef restoration efforts after Hurricane Ivan in 2004, and hurricanes Emily and Wilma in 2005.

"Some rangers, when we first got started, didn't know how to set up buoys or scuba dive — and some of them didn't even know how to swim," Nájera-Hillman told DW.

Still, he said locals were highly motivated. "After much effort, we learned that we can successfully repair a reef after major destruction, and that felt nice," he added. 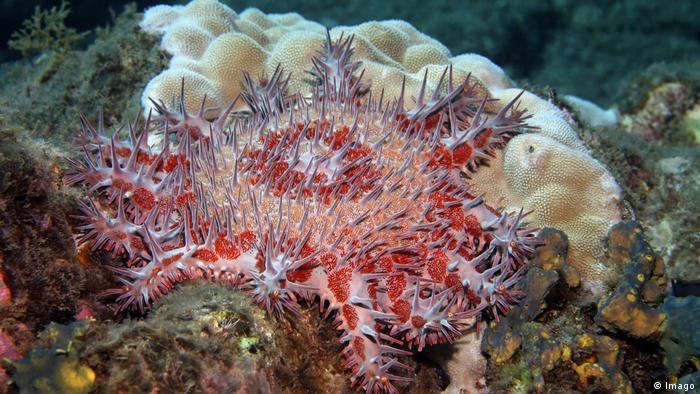 The Mesoamerican reef is the second-largest in the world, after the Great Barrier Reef

Creating local jobs when they are needed

And the fund could help communities cope by providing jobs after a storm hits.

"Some of these people — whose livelihoods have been be affected by hurricanes — would likely not be able to work for several days or potentially weeks, so this project would provide them with an alternative source of income," Way said.

Zepeda said TNC's rapid-response force is soon to take off, ensuring that when the next hurricane does strike, the community will be ready.

"The locals are extremely excited about protecting their community and getting involved, so everyone is ready to do more," she said.

Some chemicals in sunscreen can kill corals, researchers have discovered. So how to protect your skin and reefs at the same time? DW reports from Bonaire in the Caribbean. (13.04.2018)

Mexico edged out Turkey last year to become the eighth most popular tourist destination in the world. The record run has continued for the first quarter of 2017, according to the latest figures. (12.05.2017)

Insured against the Storm

Extreme weather: Why people risk their lives to save their homes 21.07.2021