Natural disasters cause record costs for insurers in 2017 | Business | Economy and finance news from a German perspective | DW | 04.01.2018

The world's biggest reinsurance company, Munich Re, has unveiled new figures about the costs of natural disasters in 2017, showing that the industry faces record payments to insured clients. 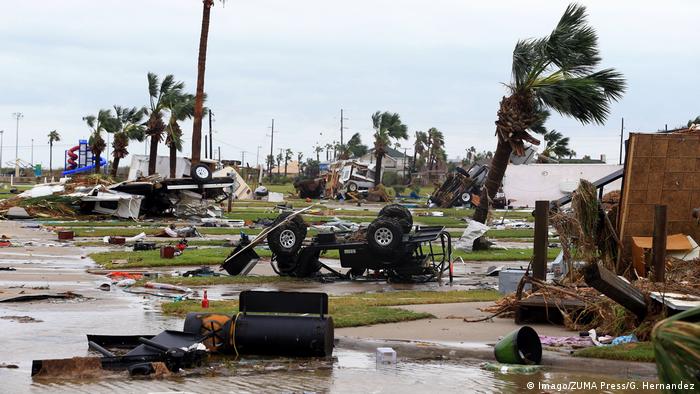 Insurers around the world will have to pay claims of around $135 billion (€112.2 billion) for losses from natural disasters in 2017 — the most ever and following a spate of hurricanes, earthquakes and fires, according to a closely-watched report published by Munich Re on Thursday.

The German reinsurance company's annual natural catastrophe review also said that last year's total losses, including those not insured, were $330 million, the second-worst in history after 2011 when an earthquake and tsunami wreaked havoc in Japan.

Munich Re estimates that a total of 710 natural catastrophes in 2017 — including hurricanes Harvey, Irma and Maria, as well as a severe earthquake in Mexico in September, floodings in Asia — caused the loss of about 10,000 lives.

Although individual events could not be linked directly to climate change, global warming was playing a role, the report said. Torsten Jeworrek, Munich Re board member, added that the company's experts expected extreme weather to occur more often in future.

"Some of the catastrophic events, such as the series of three extremely damaging hurricanes, or the very severe flooding in South Asia after extraordinarily heavy monsoon rains, are giving us a foretaste of what is to come," he said.

And Ernst Rauch, head of Corporate Climate Center at Munich Re, said that 2017 wasn't "an outlier" in terms of natural catastrophes in the past decade. Insured losses had surpassed $100 billion multiple times since 2005, he noted, adding that this may be the "new normal" for the insurance industry.

Tonga seized headlines when it was hit by a tsunami wave triggered by an underwater volcano. The South Pacific island nation is no stranger to natural disasters. Here are five facts to better understand the region.